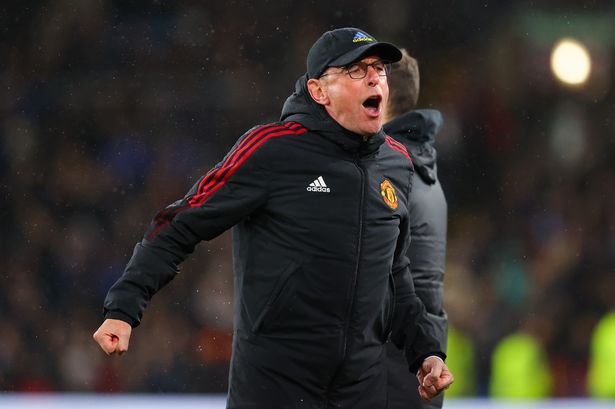 Manchester United failed to tighten their grip on a top-four berth after being held to a goalless draw by Watford at Old Trafford on Saturday afternoon.

The Reds, who were hammered 4-1 by the Hornets at Vicarage Road back in November in their final game under Ole Gunnar Solskjaer, created a plethora of opportunities but failed to take their chances when they came their way. If anything, it had an identical feeling to the recent clashes with Middlesbrough, Burnley and Southampton.

United, who dominated from pretty much the first whistle, were guilty of spurning a whole host of opportunities, especially in the first half. Alex Telles, Bruno Fernandes and Cristiano Ronaldo were amongst those to go closest but they fluffed their lines.

Therefore, it was unsurprising when interim manager Ralf Rangnick, who will sample the experience of a Manchester derby for the first time on Sunday afternoon, rolled his side’s finishing.

“We had enough chances,” Rangnick said. “In the first half, we had four clear opportunities that normally are enough to score at least one or two goals and the second half was similar.

“In the end it’s about efficiency, being clinical in front of goal, and this is not for the first time, unfortunately. Apart from that, we were in full control of the game, we dominated the game.”

Dominated they did. United created a wealth of opportunities and, on another day, would have won the game comfortably.

However, just as they did in recent home games against both Middlesbrough and Southampton, they failed to make that dominance count. But is Rangnick to blame for the chances United continue to waste?

It is not the answer. That is because United, who currently occupy fourth place by just two points ahead of West Ham United, have created more chances in the Premier League since Rangnick took temporary charge for the first time on December 5 against Crystal Palace than anyone else.

As per StatmanDave on Twitter, United have created 160 chances in the Premier League since Rangnick took charge, a figure that stands higher than anyone else’s tally of chances created. Considering United have only scored 20 goals in 13 games, though, it tells you everything about their finishing woes.

Since the German took over the reins, United have only scored three or more goals in the league on three occasions, putting three past Burnley and Brentford and four past Leeds United. Taking into account their wealth of attacking talent, it is clear that they should be doing far better.

But considering the club has grand ambitions to add a new striker to its ranks this summer, it could create an argument for United to give Rangnick the job on a full-time basis, although that is unlikely. But the German has shown, as proven by the stats, that he can get United playing forward-thinking, attacking football.

ALSO READ: What Manchester United players did during their days off ahead of Man City fixture

He cannot control those missing the chances at the end of the move. That is down to the players on the pitch to convert them.

But he has managed to get United playing in a way where they are creating opportunities to score. It would be far more concerning if they were not creating chances.