Skip to content
Home News The London exodus two years on: is the grass still greener? 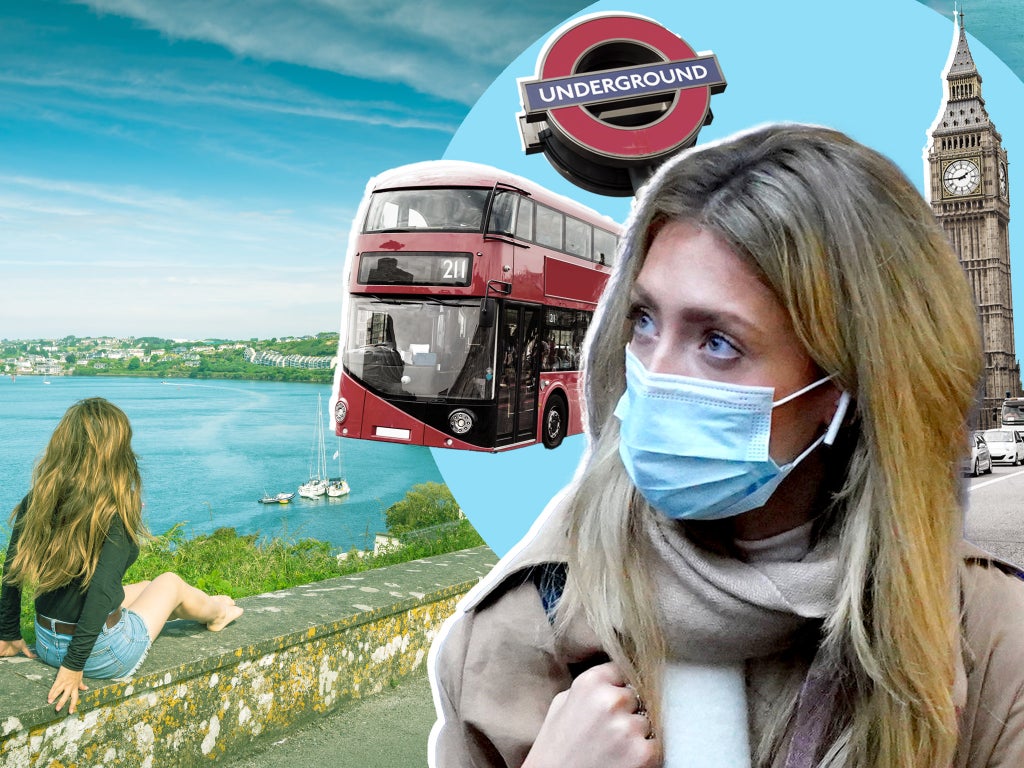 When murmurs of a potential nationwide lockdown hit in March 2020, Lauren, 34 says the idea of ​​being stuck in their London flat was enough to make her and husband Andy, 37, “pack up and escape” to a family home in Bournemouth.

The couple’s move began as a safety consideration, due to Andy having a lung condition putting him in a vulnerable category. But two years later the couple are still living in the coastal town over 100 miles away from the city where Lauren had lived for 12 years, and Andy, all his life from him. “We ended up loving the lifestyle, and though we were initially renting, decided to sell our flat in South London,” says Lauren.

Leaving London for a cheaper mortgage, more space and cleaner air is nothing new of course, especially for those in their 30s, but in the two years ensuing the pandemic the trend for leaving the capital gained pace.

At the beginning of 2021, PricewaterhouseCoopers predicted that London’s population could decline for the first time since 1988 by as much as 300,000. While it’s hard to establish an exact figure for the exodus two years on, with several census’ quoting different figures, it’s clear that the pandemic was a major driver for many to leave the capital.

Multiple lockdowns spent inside the smaller than national-average footprint of their homes and economic uncertainty weighed heavily on Londonders, and it’s easy to see how the grass looked greener away from the capital by the end of 2020. While the year before many Londoner’s leaving plans were temporary – as Lauren and Andy had intended their stay to be – and in haste, 2021 was a year for permanent moves. Indeed, the Hamptons estate agency reports that more than 90,000 Londoners had quit the capital in 2021 to buy new homes in the UK, and called it the largest exodus in “at least a generation”.

See also  Blinken will meet with Lavrov next week

Tom and Yazmin, both 35, had only left London for their university years before the pandemic, and despite toying with the idea of ​​moving previously, they call the Covid-19 pandemic and its lockdowns “the trigger” to their permanent move to Whitstable, Kent in spring of 2021. “The pandemic was a complete reset and gave us the headspace to realize that there wasn’t going to be a better time to make the leap,” explains Tom.

“In London we lived in a one-bed flat, while in Whitstable we have a spare bedroom, a garden and the sea is a short eight-minute walk away, so we walk the dog on the beach twice a day. Our new lifestyle has meant our wellbeing has improved greatly, and with quite a clear cut and noticeable shift.”

Moves to the commuter belt have long been common for Londoners wanting more space, but as home working facilitated the possibility to live and work anywhere, the coast became a hotspot for relocation. RightMove analysis of buyer searches in 2021 shows that searches for homes in coastal towns saw unprecedented rises, for example Rhos on Sea, Wales and Hove, East Sussex saw increases of 858 per cent and 680 per cent respectively. Homes in Cornwall were more searched than London in the first two months of 2021.

Like Tom and Yazmin, Sabah, 40, says relocating by the sea has transformed her life for the better. The first lockdown fell while Sabah was visiting her mother de ella in Westcliff-on-Sea, Essex, and she planned to stay just until she was allowed to return to London. However, after falling seriously ill she had to remain, and after two years spent in and out of hospital she says her new life de ella has allowed her to “learn to breathe and live in the moment”.

“My London life as a lawyer left me no time to appreciate the things I had worked so hard to buy or to spend time with my loved ones. I was living to work.”

The changes to her lifestyle have also facilitated a career change for Sabah. “I reduced my working hours as a lawyer and decided to follow my dream of becoming an artist. My mother’s home is much bigger than her home de ella in Wanstead and has a unit in the garden which I can use as my studio. ”

The changes to work models which enabled many to move are now in flux, however. The government’s lifting of Plan B measures on 26 January mean guidance on working from home is now no longer in place, leaving workplaces and employees to navigate the parameters of hybrid working models.

Tom runs his own company and found the pandemic reinforced the success of his company’s pre-existing hybrid working model. “Our team of 10 have always been hybrid workers – but the pandemic made it widely accepted by clients and suppliers for us to move out of the city,” he says.

While there is a clear shift in thinking around work-life balance after the pandemic, the future of hybrid working across industries is still up in the air. Dr Miriam Marra, a Professor of Finance at Henley Business School predicts that many companies may echo Tom’s sentiment. “Employers have witnessed that it is possible to manage human resources in a flexible way and to get work done efficiently out of the office, or in different working patterns, reducing commuting and social time.

“Therefore, they are more prone to consider offering it, especially if that means retaining good talent which could otherwise seek employment elsewhere,” she explains. Dr Miriam adds that currently in many sectors “the demand for work in London is above its supply, so the market is skewed towards employees to be able to pick and choose”, and people are of course likely to choose the working conditions that benefit their lifestyle the most.

The adverse effects of the pandemic and appetite for change also mean that a record number of people are aiming to change jobs in 2022, in a continuation of what’s been called the Great Resignation.

However, with a completely remote model unlikely to remain an option for those in permanent jobs, even the most flexible hybrid working model isn’t feasible for some of the London leavers. Plus, as the city’s higher wages and diverse industries aren’t replicated in the coastal and country locations that proved popular for an exodus, some of them may need to move closer to London or return entirely in order to make the commute manageable.

With a career as a Social Media Lead, Lauren worked from home during the pandemic, but says the decision to relocate permanently away from London rests on her workplace’s approach to hybrid working – which is still up in the air. “We still don’t want to buy in case I have to travel frequently and it’s too stressful. It’s a two hour journey to London, so I can’t really commute more than a few days a week,” she explains.

It’s not just work lives which are in flux again at the start of 2022. Our social lives are changing too, as London’s buzz returns with mass events going ahead, and the hospitality industry enjoying its longest period of open doors since the pandemic began, it could spell FOMO for many London leavers.

This is the case for James, 33, a Creative Producer who moved to Berlin in the pandemic to avoid being separated from his then boyfriend. He says the “endless possibility and opportunities London offers” have him yearning to return, despite his rent from him being cheaper in Germany, and saying he fears the return to a “cramped commute.”

Living abroad allowed James to undergo a major body and health transformation: “I used to live my life very fast in London and as a result was very thin. During the pandemic I had time to proactively work on my body and gained 29kg. I feel like a different version of myself now.” Despite the transformative effects of living away from home, due to missing friends, family and the culture of London, James says it’s just “finding a job holding me back from moving home”.

A return to London could still be an option for leavers who sold up, as the rise in property prices slows compared to the rest of the country. RightMove data shows that while house prices have still risen 3 per cent in the past year in London, while prices have risen at a rate of 10 per cent on average across the UK. For many leavers, however, the lifestyle changes are positive enough that they won’t consider going back.

As Tom explains: “Our two bed house with a garden in Whitstable is double the square footage, and cost 34 per cent less than our one bed top floor flat with no outdoor space in London. Combine that with all the other benefits and it’s hard to see the value in giving all that up for urban living again.”

The unprecedented effects of lockdown have led to life changes for people everywhere, but for many who made moves out of the capital, the benefits have been myriad and more life-altering than they would have expected. It’s clear that stepping off the treadmill of city life and adopting a slower pace has made the sense of health and happiness that the pandemic taught us to value, feel more tangible for many London leavers. And shorter commutes and thriving social lives aren’t providing enough to lure many back.