The Lehendakari, Iñigo Urkullu, has demanded from the Spanish Government the immigration transfer in a ceremony held this morning in Vitoria-Gasteiz, coinciding with the International Day of Migrants, “We are going to continue promoting the Basque reception model and we are going to continue working to have all the tools, including the immigration competence contained in the Gernika Statute and that we demand in it,” he said, while defending that they will continue “working from inter-institutional collaboration and with the Third Social Sector.”

The Lehendakari, Iñigo Urkullu; the Minister of Equality, Justice and Social Policies, Beatriz Artolazabal, and the president of Eudel and mayor of Vitoria-Gasteiz, Gorka Urtaran, have chaired the event organized to end the adhesion campaign of more than 120 Basque municipalities Basque Social Pact for Migration, a campaign that began two months ago in order to “consolidate in Euskadi a shared discourse and an image of unity to confront populist demagoguery” and whose motto is “Offer what we would like to receive”.

The adhered municipalities have received a Good Practices Notebook, prepared by the Directorate of Migration and Asylum, which contains a twenty initiatives to deploy the Social Pact at the municipal level. The notebook contains projects and the methodology to put them into practice, as well as contacts with those municipalities that are already successfully developing these initiatives, such as that of Ermua.

In his speech, the Lehendakari urged “to be able to build social cohesion with the sum of different colors, cultures and sensibilities.” To do this, he stressed that it is necessary “the involvement of everyone, because migration in transit and the number of people seeking international protection continue to increase.”

In this sense, he explained that the VI Intercultural Citizenship, Immigration and Asylum Plan 2022-2025 aims to build a Basque Diversity Management Model based on interculturalism. Urkullu has highlighted as objectives of this Basque Government the construction of an “equal Basque society in access to rights and duties”; a society that “promotes equity and facilitates equal opportunities”, and that is “more cohesive and more supportive with the most disadvantaged groups”; in short, that “respects the diversity of all people and cultures.”

It should be noted that the migratory phenomenon has taken a toll the lives of four people on the Bidasoa river during the last months and three other people died run over by the train in Ziburu (Lapurdi), on the other side of the muga. 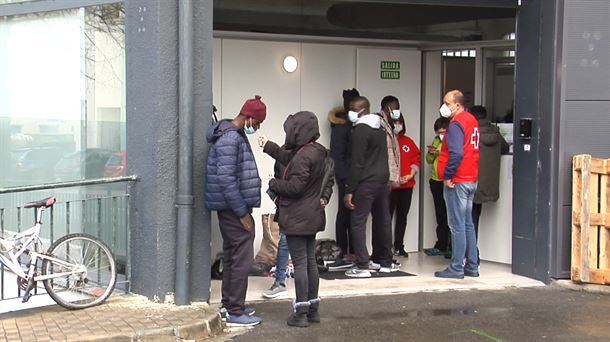 The keys to the Basque Social Pact for Migration

The proposal of the Basque Social Pact for Migration of the Basque Government comes to answer of “a united and supportive way“to the migratory challenge in its different expressions, and its objectives have” an ethical, preventive and proactive projection. “

The people, entities and institutions that sign the Pact share the following starting premises: pluralism, solidarity and necessity. Likewise, the signatories of the text undertake to work on eight transversal guidelines: coexistence, human rights, transversality, cohesion, education, the local sphere, equality and languages.