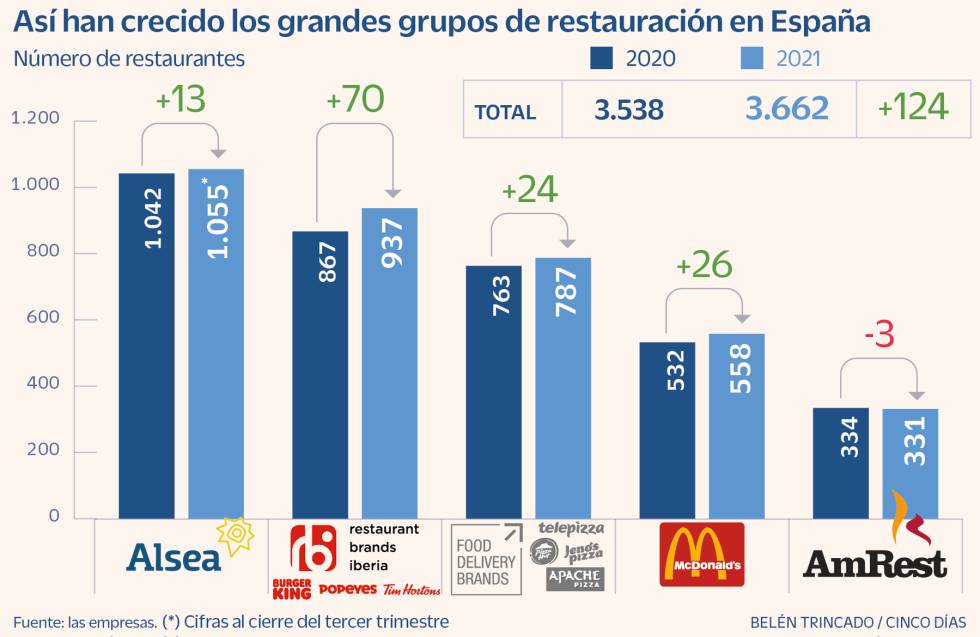 The five reference groups that operate in organized Spanish catering have continued betting on the openings of new establishments in 2021. And they have done so despite the general crisis in the hotel business; Some of these companies have not yet recovered their pre-pandemic income; and despite the strength of delivery.

Alsea, Restaurant Brands, Food Delivery Brands, McDonald’s and Amrest add up to 124 openings among all, according to the latest figures provided by them. All have grown, reaching more than 3,600 establishments together.

The one that has accumulated the most openings is Restaurant Brands Iberia (RBI), which operates the business of Burger King, Popeyes and Tim Horton’s coffee shops. The momentum comes from the first two. As reported by the company, Burger King has undertaken about 40 net openings this year, which added to the 849 restaurants it had at the end of 2020, place it at around 890 in Spain. But at the same time, RBI has given a major boost to its latest format, Popeyes, which specializes in fried chicken. In 2021 it has gone from 12 restaurants to 41, and has a goal of reaching 200 in five years.

RBI’s strategy, acquired by Cinven this past summer for 1,000 million, focuses on its own stores, unlike McDonald’s, its rival in the hamburger field and which is the second of these operators that has grown the most. The North American chain will close 2021 with 558 restaurants in Spain, 26 more. In his case, 90% of them are operated by franchisees. The company wants to continue growing in Spain, and in September it launched a campaign to attract new franchisees and boost openings.

Food Delivery Brands, the former Telepizza Group, will close the year with 787 restaurants in Spain, 24 more. It does so thanks to its main brand, which reaches 716, 19 more than at the end of 2020. A figure higher than that of Pizza Hut, which ends the year with 71 stores, five more. In his case, also 90% of the premises correspond to franchisees.

The Mexican Alsea, which operates Domino’s Pizza, Starbucks, and owns Vips, in addition to being a Burger King franchisee, had 1,055 stores at the end of the third quarter, the latest data provided.

Of the five companies analyzed, it is the one with the most implantation in Spain, but the one that grew the least compared to 2020, with 13 net openings. These have corresponded to local Domino’s Pizza. Amrest, for its part, is the only one that was regressing, at the moment, until the third quarter. As of that date, it had 331 stores, three fewer than at the end of 2020. The company has opened seven KFC restaurants, but has closed all its Blue Frog, four, and has also retracted positions in its Bacoa and Sushi Shop brands.

According to data from the consulting firm NPD, organized catering reached a recovery of 88% of the billing prior to the pandemic. He did it in September, being the peak of the whole summer. The sector expected to close the year around 20% below 2020 sales, although this was before the sixth wave of Covid-19 infections exploded. In the first nine months of 2021, Amrest’s turnover in Spain was 21% lower than in 2019. Food Delivery Brands, for its part, launched in its third quarter results presentation the forecast of recovering “sales levels pre pandemic before the end of the year ”.