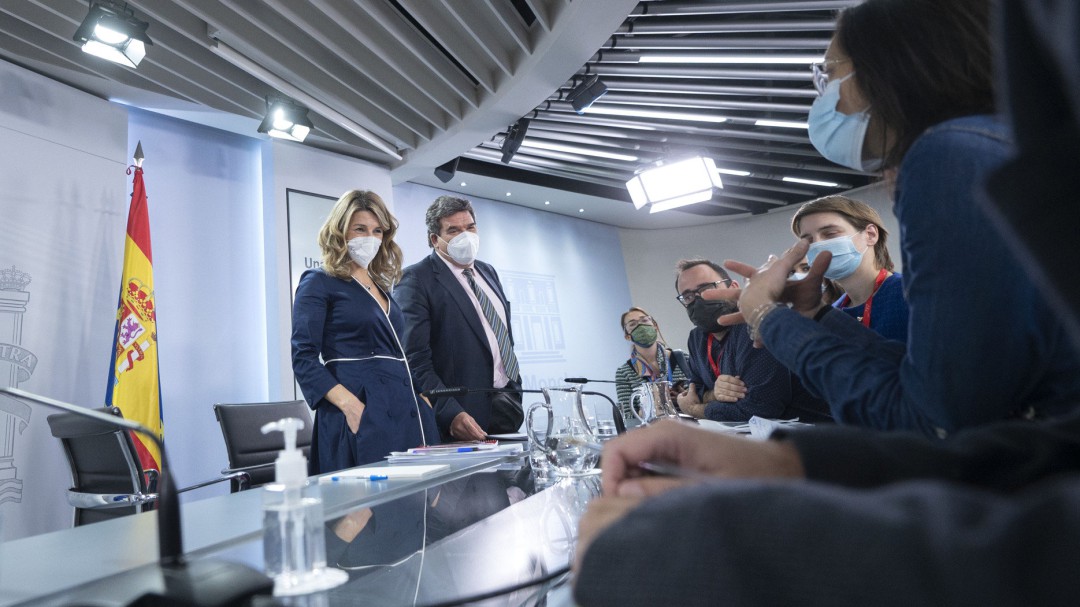 These are the ten keys of the decree-law of the labor reform approved this Tuesday in the Council of Ministers.

Collective agreements recover indefinite ultra-activity (valid once it has expired) and the company agreement ceases to have priority in terms of wages, in order to avoid wage devaluation practices.

In the case of subcontracting, the company agreement only prevails if it has better salary conditions than the applicable sector.

2. Ordinary fixed contract and the work and service contract disappears

A temporary hiring modality that, according to the Government, is the one that concentrates the greatest fraud is eliminated. The current work and service contracts may remain in force for a maximum of six months from the entry into force of the labor reform.

In the construction sector, the ordinary contract will also be the indefinite one, but once the work is finished, the company must offer a proposal for repositioning the worker, which in case of being rejected or not being able to take place will lead to the termination of the contract with a 7% compensation calculated on the salary concepts of the agreement.

3. The temporary contract is limited to circumstances of production and substitution of the worker.

The temporary contract due to production circumstances for unforeseeable situations or temporary employment mismatch may not last more than six months, extendable up to another six months.

For foreseeable situations of limited and limited duration, it may be used for a total of 90 days, never continuously.

The substitution contracts will allow covering the suspension of the contract with a job reservation, the reduced working hours for legal or conventional reasons and the vacancies during a selection process without exceeding three months.

See also  the minors, the victims that increase the most

4. The temporary will be fixed if you accumulate 18 months of work in two years or 24 months

Fraudulent temporary contracts will be made permanent, as well as those who accumulate 18 months of work in a period of 24 months, in the same or different job positions with the same company or group of companies, through two or more contracts due to production circumstances. , directly or through its provision by temporary employment agencies.

5. Fines are raised and will be imposed for each wrongly hired worker

Infringements for improper use of temporary contracts will be applied by each affected worker, instead of by company, and they rise from 8,000 to 10,000 euros in their maximum degree.

6. Penalty of 26 euros for each contract of less than one month

Temporary contracts of less than 30 days will have an additional Social Security contribution of 26 euros each time they are canceled.

The penalty is increasing, so that for a short 10-day contract it would be 26 euros, but if the same working time were covered with two 5-day contracts it would be 52 euros.

The fixed discontinuous contract is established for work of a seasonal nature or linked to seasonal productive activities, with certain execution periods.

For seniority purposes, the entire duration of the employment relationship will be taken into account and not the time of services actually provided.

The training contract will have two modalities: alternation training and obtaining professional practice.

ERTEs for economic, technical, organizational and production reasons (ETOP) will have greater processing and application facilities for SMEs and exemptions in Social Security contributions of 20%, conditional on carrying out training actions.

The ERTE from outside major add as a specific cause (already applied in the pandemic) the impediment or the limitations to the activity by decisions of the governmental authority, they will have exemptions of 90% and the reduction of working hours will be between 10 and 70% .

10. The RED mechanism is created

Companies may start up these ERTEs, after activation by the Council of Ministers, in the event of a crisis for a maximum of one year and with decreasing exemptions from 60% to 20%, or in case of sectoral restructuring for six months extendable to a year and with exemptions of 40%. The RED Mechanism exemptions are linked to the development of training actions.

The RED benefit will be 70% of the regulatory base throughout the period and will not consume unemployment.

The Government will create a RED fund to meet the financing needs of the mechanism in terms of benefits and exemptions.