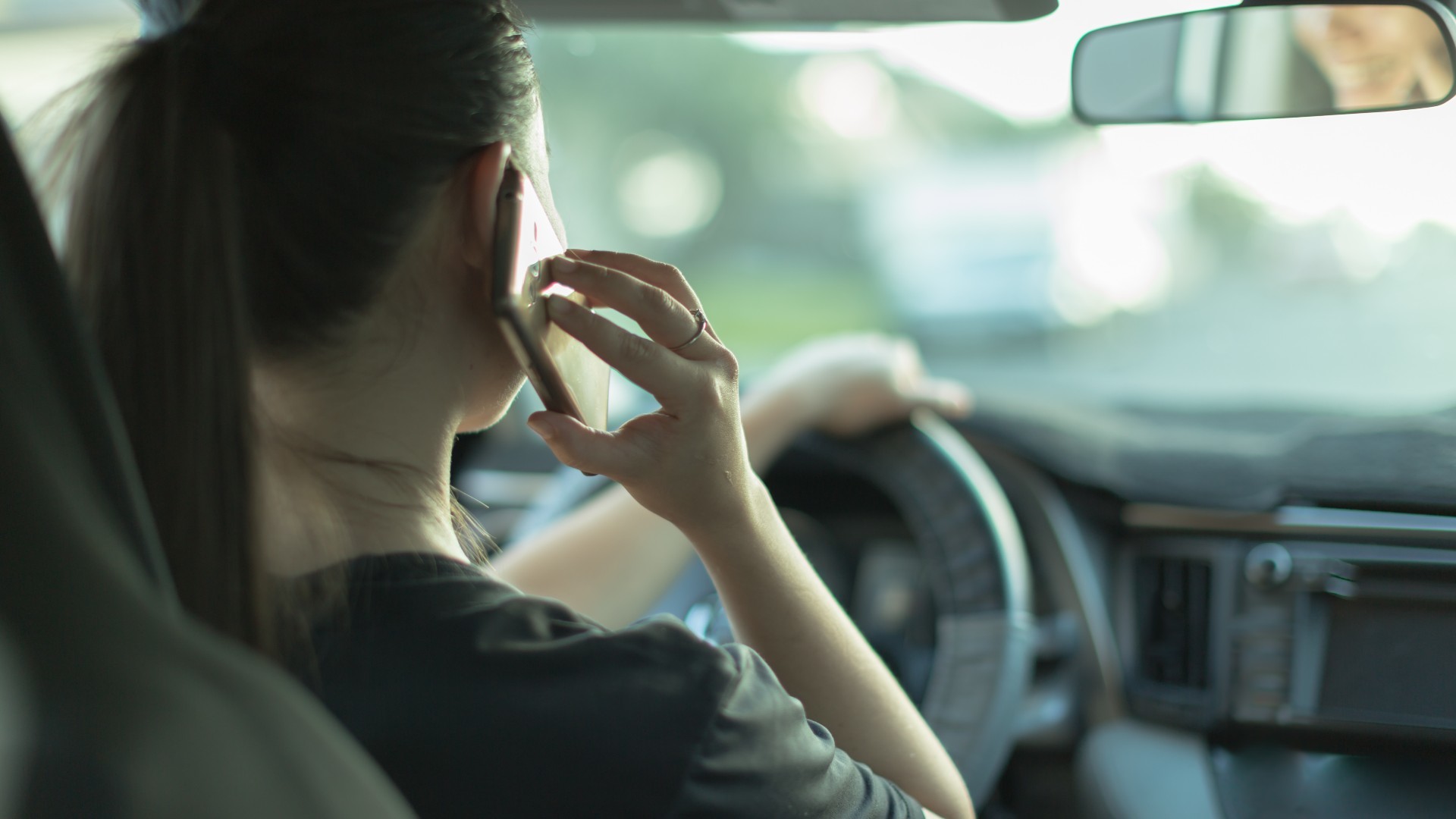 Congress approved this Thursday the modification of the Law on Traffic, Circulation of Motor Vehicles and Road Safety after adopting practically all of the amendments introduced by the Senate. The new measures include from a harsher sanction for the use of the mobile, with six points, until the prohibition of passing in 20 km / h speed limits in overtaking and the increase from three to four points by do not use a belt, child safety systems or helmet.

According to the document, the so-called driving license by points “has been the most effective tool to contribute to the reduction of accidents on the roads”, which is why it is expected that its update will improve the efficiency of the system and reinforce the road safety. The objective, he explains, is to reduce the number of deaths or serious injuries in accidents to a number close to zero by the year 2050.

Using the mobile will be penalized with six points

Using the mobile phone behind the wheel, one of the most common distractions, will now be penalized with six points, three more than in the previous text. The fine of 200 euros and a 3-point penalty is maintained if the offender uses the mobile but does not have it in hand. As a novelty, the vehicles of the Armed Forces are exempt from this prohibition when circulating in convoys.

Likewise, it will be possible to use certified or approved wireless devices in the protective helmet of motorcycle and moped drivers, for communication or navigation purposes, as long as they do not affect driving safety. It will also be possible, as up to now, to use them when they do not involve or use the hands or helmets, headphones or similar instruments. However, three points will be lost for keeping mobile phone devices snug between the helmet and the user’s head while driving.

The approved modification takes into account personal mobility vehicles, such as electric scooters, and includes them in article 47, along with drivers of motor vehicles, mopeds and bicycles. In this way, they must use a protective helmet in the terms established by the regulations. In addition, personal mobility vehicles and bicycles and cycles they will not be able to circulate on the sidewalks, according to a new section of article 25.

On the other hand, according to article 4, road safety education for safe and sustainable mobility will include training in cycling driving and personal mobility vehicles, which, together with the regulation of automated driving, will be the responsibility of the General State Administration.

From now on, drivers who intend to overtake a cycle or moped, or a group of them, must make a complete lane change when the road has more than one lane per direction, the safety distance of 1.5 meters included in the previous regulations is not sufficient. As another novelty, it is added to serious offenses the fact that stop or park in the bus lane, lanes or bicycle lanes.

In the case of overtaking endangering or hindering cyclists or without leaving the minimum separation of 1.5 meters, it will now be penalized with six points instead of four. On the other hand, article 22 specifies that, although the driver of a vehicle that circulates behind another must leave a space between them that allows him to stop in the event of sudden braking, bicycle drivers will be allowed to circulate in a group without doing such separation, paying “special attention in order to avoid reaching between them.”

Four points for not wearing a helmet or child restraint systems

Another new aspect of the text is the one that appears in article 76 and for which, since its approval, not to make use of “Correctly” child restraint systems, helmet and other mandatory protection elements will be a serious offense, differing from the previous document, which only mentioned this penalty in the case of not using them. Will become penalized with four points instead of three.

The new text eliminates the possibility for cars and motorcycles to exceed the generic speed limits by 20 km / h when they overtake other vehicles traveling at a lower speed than those. An “important” aspect, says the document, to adapt the speed of Spanish roads to those that are being established in the European Union.

Two years to recover the points

The legal modification unifies the term to recover the initial balance of points to two years, disappearing the distinction between serious penalties, for which those two years were available, and between the very serious ones, for which three years were established. According to the text, a system “that was complex to understand” is simplified in this way, since many were unaware of the type of offense committed.

Likewise, a section is added to article 63: “Passing safe and efficient driving courses will compensate with two additional points up to a maximum of fifteen points and with a maximum frequency of one course of each type every two years “, as long as the established requirements are met and there is a positive balance.

A 0.0 rate of alcohol for minors

The DGT proposes creating a driving license for 16-year-olds

A new additional provision is also added on the control of the consumption of substances that may disturb the performance of professional driving. The Government, through Royal Decree and within a period of twenty-four months from the entry into force of the law, will regulate the procedures for the conducting initial, periodic, or random checks during the exercise of the professional activity to drivers of vehicles for the transport of passengers and goods by road.

Cheating on exams will be a “very serious” offense

In this legal reform, it has been taken into consideration guarantee the absence of fraud in the tests to obtain and recover driving licenses or permits or other administrative authorizations to drive. Since the approval of the Law, the use of unauthorized intercom devices during the exam has been classified as a very serious offense. The individual you will not be able to resubmit within six months, apart from the corresponding fine: 500 euros.

On the other hand, it is established in article 62 that education regarding the theoretical knowledge necessary to obtain a driving license may be carried out from distance and, after obtaining the administrative authorization, this may be accredited by means of its physical or digital presentation. Likewise, they may be taught in a online awareness and sensitization courses provided that interaction is ensured.

It is forbidden to wear radar jammers

Until now, the driver could only be fined if he was intercepted using a inhibitor of radars or kinemometers or other instruments with the same mission of circumventing or interfering with the proper functioning of traffic surveillance systems, but the new law establishes the prohibition of carrying them in vehicles, punishable by three points.

‘Did you know’ – Types of radars

Nevertheless, notification mechanisms are excluded that report the position of traffic surveillance systems.

The new text includes the environmental Protection in several of its sections. For example, article 76 establishes that not respecting the circulation restrictions derived from the application of the protocols before pollution episodes and in low-emission zones will be classified as a serious sanction.

Also, the article 10 It specifies that the road user “is obliged to behave in a way that does not unduly interfere with circulation, or cause unnecessary danger, harm or inconvenience to people or damage to property or the environment.” As for the penalties, there is an increase in throwing objects on the road or in its vicinity that could produce fires or accidents a six points instead of four.

The signage will appear in the official language of the community

The previous article 56 established that the written indications of the signals had to be expressed, at least, in the official Spanish language of the State. Now, with the new reform, these will be in Spanish and, in addition, in the official language of the autonomous community recognized in the respective statute of autonomy, “when the signal is located in the territory of said community.”

Non-payment of toll will be a minor offense

Article 75, referring to minor offenses, includes a new letter dedicated to the non-payment of toll, fee or public price, “when these were required”. For this reason, a new article 100 bis is established by which the Central Traffic Authority may provide the responsible entities with data on possible offenders.

It will also be a minor offense (up to 100 euros) for breaching the obligation of drivers to be at all times in a position to control their vehicle. For its part, “failing to comply with the rules on assistance on public roads” will be considered a very serious offense, as well as not incorporating anti-snatch breathalyzers in passenger transport vehicles, which carries a fine of 500 euros.

A telematics system for professional drivers

The reform incorporates an additional provision, the twelfth, which establishes that the Central Traffic Headquarters will develop a telematics system so that companies and freelancers can know if a professional driver who works in them is legally authorized to drive, the consent of the worker is not necessary.

Road safety on Radio 5 – Transportistas, the other forgotten heroes without capes – 06/28/20 – listen now

The operation and management of said telematic system will be carried out subject to the provisions of the European Union (EU) regarding the processing of personal data in Organic Law 3/2018, access being limited to those who prove their employer status and that they are registered in the registry created for this purpose. The terms of access of these companies to the aforementioned telematic system must be established by regulation within a maximum period of one year since the entry into force of the new law.

The competence of the audit function is introduced

In order to guarantee the safety and quality of the entrusted public services, the competence of the auditing function is introduced.

The audits must allow the centers and operators that perform services and procedures related to the autonomous body, Central Traffic Headquarters, to comply with the requirements and obligations that the regulations require, and are “an important complement to the traditional inspection function”, resulting in a higher quality of services to citizens.

A young man at the wheel