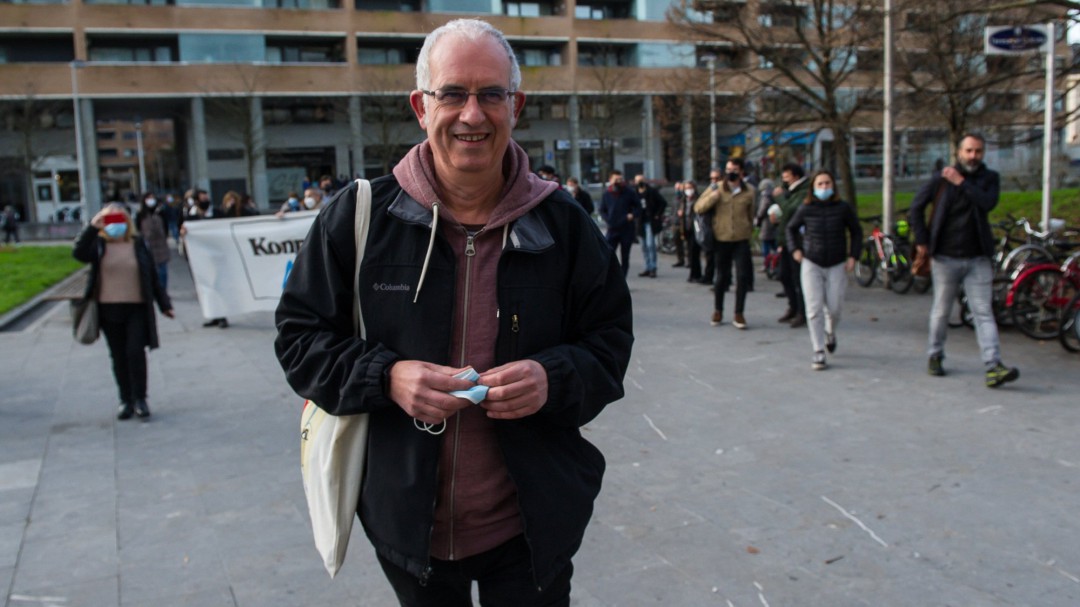 The judge of the National Court, Alejandro Abascal, has prohibited the former leader of ETA Mikel Albisu, Antza, from leaving the country, investigated for the crime in 1995 of the deputy mayor of the PP in San Sebastián Gregorio Ordóñez, although he has warned him that if Failure to do so will dictate your admission to prison.

The magistrate has also agreed to withdraw his passport and designate a residence in Spain after taking a statement from him in the framework of the case in which he is being investigated for his possible responsibility in the attack as a member of the “executive committee” of the gang then. A crime that Antza, who has testified by videoconference from the San Sebastian Palace of Justice, has dissociated himself both before the judge and in statements to the media.

Although in his appearance he has refused to answer any questions, he has stressed that he has already been sentenced in France to 20 years in prison for association of criminals and has questioned the accusations for being based, he has said, on manipulation and torture, legal sources inform Efe .

Before the media Antza has abounded on this issue and has maintained that this entire situation responds to “an attack by those who oppose the achievement of a free and peaceful Euskal Herria”.

In his order, the judge accepts “as incidentally reliable and credible all those elements related”, among other issues, with “the decisive and necessary role of the highest decision-making body” of ETA to commit an attack and “the relevant role played” by Antza in the executive committee of the band, “in relation to the orders” to assassinate Ordoñez, “compiled mainly in the documentation” seized from members of ETA.

And given “extraordinary seriousness of the crime that is imputed to him” and the penalties to which he could face, the judge does not see irrational that he could evade Justice, reason for which he has adopted the mentioned precautionary measures.

It has done so following the criteria of the accusation exercised by victims’ associations such as Dignidad y Justicia, AVT, the PP or the private accusation. The Prosecutor’s Office has demanded the designation of an address so that it can be located.

On behalf of Ordóñez’s widow and son, the lawyer Rubén Múgica has intervened, who has demanded before the media “a redoubled effort so that those who were hierarchs and bosses of the criminal organization are tried and sentenced” also for “inducing the perpetration of the murders. “

A demand similar to that of the twenty victims who have gathered at the doors of the National Court in a call promoted by Dignidad y Justicia, whose spokesman Daniel Portero has warned that they are “in the discount period for many unsolved murders” , which the association figures at 375.

In San Sebastián, Antza has been received amid applause from around thirty Sortu supporters such as the leader Haimar Altuna; historical leaders of the nationalist left such as Rufi Etxeberria and Joxe María Olarra; and the San Sebastian mayor of EH Bildu Reyes Carrere, who stood behind a banner with the motto in Basque “Solution and peace. Mikel Albisu gurekin”.

Altuna has vindicated the “steps” that “the pro-independence left” is taking and will continue to take towards peace, coexistence and for a democratic solution in the conflict we have with the State, “while, he said,” the usual ones continue trying to get in the way. “

At the press conference of the Council of Ministers, the Government spokesperson, Isabel Rodríguez, reiterated that the Executive is always “on the side of the victims” and that, despite not knowing the details of the incident, the position on the acts of exaltation it is “failing” them.

This court case dates back to 2015, when the judge indicted Antza and four other former leaders of ETA – Ignacio de Gracia Arregi, “Iñaki de Renteria”; José Javier Arizcuren Ruiz, “Kantauri”; Julián Achurra Egurola, “Pototo”; and Juan Luis Aguirre Lete, “Insuntza” – following a police report on the indications of their alleged participation, as members of the “executive committee” of the gang, in the decision to kill Gregorio Ordóñez.