Skip to content
Home News The IBEX plummets 4.96%, the biggest drop since June 2020 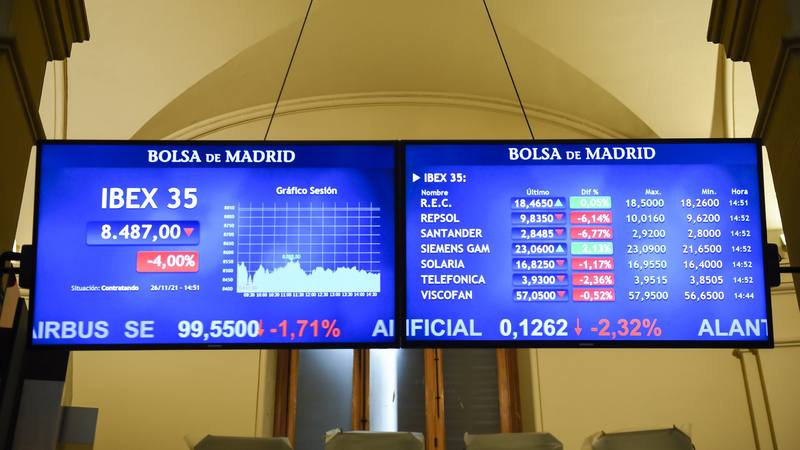 The IBEX 35 has plummeted 4.96% this Friday, the biggest drop since June 11, 2020, due to the panic unleashed among investors over the new variant of the coronavirus detected in South Africa, called Omicron, which the World Health Organization (WHO) has described as “worrying”.

In this way, the main index of the Madrid Stock Exchange, which closed at 8,402.70 points, has reduced to 4.07% accumulated earnings so far this year.

The tourist values ​​have been the most penalized after the appearance of a new variant of the coronavirus in South Africa, more contagious than the previous ones, which has led several countries to paralyze air traffic to the south of the black continent.

Thus, the air transport group IAG and the airport manager Aena have collapsed 15.59% and 8.77%, respectively, and have suffered their biggest drops since the start of the pandemic in March 2020.

For its part, the company of technological solutions for tourism Amadeus has yielded 7.5% and the hotel chain Meliá, 7.77%.

Generalized falls in all European floors

In Asia, Tokyo Stock Exchange has closed with a fall of 2.53% of its main indicator, the Nikkei, due to fears about the new variant of COVID-19 detected in South Africa and the global rate of infections, together with a strengthening of the yen.

The benchmark of the Hong Kong Stock Exchange, the Hang Seng, has recorded losses of 2.67% in a day of widespread and steep losses, particularly among Chinese digital giants and casino operators.

The Seoul Stock Exchange has also closed in red and its main indicator, the Kospi, has lost 1.47% due to the concern generated in the trading floor of the volume of infections in Europe and at the domestic level and the discovery of a new variant.

The increase in coronavirus cases around the world and concern about the new variant has led investors to take refuge in traditionally safe securities such as gold or debt. At the close of the markets, the European sovereign bond yields have fallen sharply. In the case of the ten-year German, it has fallen by 35.95% to -0.335%, while the Spanish has lost 15.79%, to 0.424%. In the case of the US, the yield on its debt has fallen by 8.02% to 1.504%.

Another of the values ​​considered a “refuge” by investors is gold, which this Friday has risen more than 1% and has exceeded 1,800 dollars per ounce, although after the close of the markets in Europe it was listed at 1,786 dollars, even below the close of the day before.

The analysts of the eToro platform have explained that the “aversion to risk” that the market suffers today is affecting the assets more sensitive to growth prospects such as commodities. Meanwhile, “safer” assets, such as bonds and gold, “are in demand.”

From IG, Diego Morín, has also ensured that the current situation is creating a global sales “panic”. Despite this, the US dollar, which as he explained, “more than a refuge, is the most traded currency in the world” falls, since the market is betting on taking refuge in yen or Swiss francs, which are “currencies par excellence. coverage “.

With regard to gold and other metals, he added that “it is logical that they rebound due to their condition of safe haven when fear arises in the market, especially with a possible economic slowdown against the new variant of COVID. “” We will have to wait if the current vaccines can cope with this new strain, “he concluded.

Millions of adults are losing sleep because of the temperature, noise levels, intruding light and a snoring partner