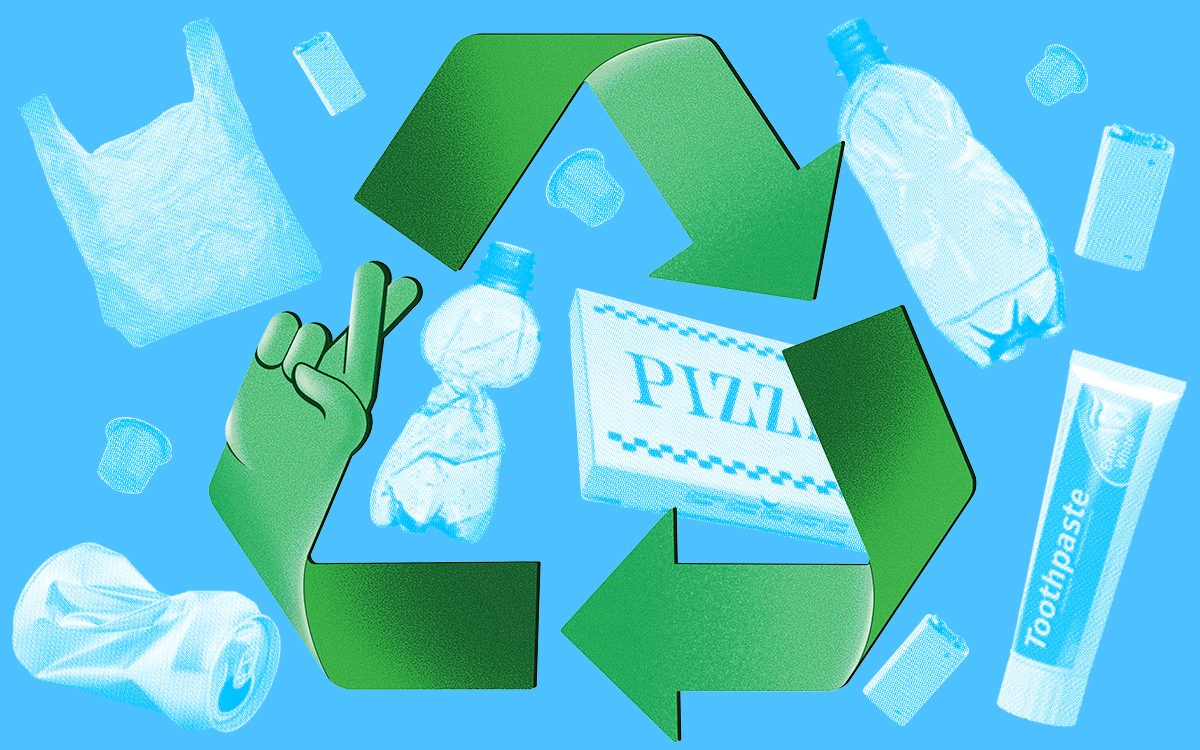 We’ve all been there; standing over the recycling bin, wondering whether you can put that plastic lid/pizza box/toothpaste tube in. And then dropping it in anyway.

Remember when it was as simple as a Sunday trip to the bottle bank? Now it feels as if you need to take a course in recycling to be properly qualified to deal with your household rubbish.

There’s no doubt we have a rubbish problem. The target to recycle 50 per cent of “waste from households” by 2020 was missed as the household recycling rate dropped to 44 per cent, down from 45.5 per cent in 2019 as people spent more time at home due to lockdowns. At the same time total household waste increased to 22.6 million tonnes in 2020 from 22.1 million tonnes in 2019.

These are big numbers – and behind them lies considerable confusion on the part of consumers who want to do their bit but who are baffled by what can and can’t be recycled and by the different rules of different local authorities.

Into this stultifying situation has waded James Piper, who has written The Rubbish Book, in which he sets out to help dispel myths around recycling, like does it really all go into landfill anyway? And is plastic always bad?

Piper has worked in the recycling space for over a decade, teaching household brands and retailers how to get packaging design and recycling right. For the past five years he has been CEO of a leading environmental consultancy.

Weighing in at 300 pages, his book is not only a testament to how thoroughly he knows his subject but also just how much there is to know. “Mine is probably the only book written intended to sit by the bin,” jokes Piper.

As well as being a reference for all those recycling queries, the book shatters some of the common misconceptions about recycling.

First off, he says, everything can be recycled. “It’s rather that some products can’t be recycled economically.”

Many companies, such as those that rely on tricky composite packaging, have invested money in the area, and future legislation will help increase plastic collection and recycling through additional costs for the businesses that do not use recycled plastic in their packaging.

Plastic, though, Piper says, isn’t always as bad as you’d think. “Everyone lumps plastic all together, but there are lots of types. We can’t live in a world that is simply anti-plastic. It’s much more complicated than that.”

PET-plastic, used in bottles, is much more recyclable than plastic film or polystyrene. “From a collection perspective the reason plastic gets a bad rep is that it’s used in so many places.”

That’s because it can have a helpful purpose. Take that cucumber wrapped in single-use plastic film. “It will last longer than the unwrapped one and it reduces food waste both in transport and in your home.”

Are bags for life helpful?

Part of the problem, he explains, is that consumer emotion often moves faster than a supply chain can evolve. “So shortcuts are taken, and positive PR sought, as the world shuns plastic and turns to alternatives without questioning the environmental impact of the new options.”

Piper likes to cause ructions among his friends by explaining to them that coffee pods, often held up as the scourge of society, are actually pretty environmentally friendly when you consider that they use less coffee than bean-to-cup. “Packaging typically only makes up about five percent of the environmental impact of a product.”

Recycling therefore is not about rights and wrongs. “It all depends on what metrics you’re using.”

Aluminum can seem like a better alternative to plastic, “but to melt aluminum you need to heat it to 750 degrees. So if you’re measuring carbon emissions, plastic is better.”

Striving to be plastic-free after watching Sir David Attenborough’s Blue Planet might feel noble, but Piper points out that most microplastics come from non-packaging applications: 50 per cent of the plastic that enters the ocean as a microplastic comes from tires and clothing. Meanwhile: “Plastic packaging that ends up in a recycling facility is no bad thing,” he says.

Plastic milk bottles now contain around 30 per cent recycled content and the fact that milk bottles are made of natural-coloured high density poly ethylene (HDPE) makes them very recyclable.

Contrast that with your doorstep milk delivery in a glass bottle, normally with a foil lid. Each bottle must be reused on average between 15 and 20 times to be as efficient as plastic from a carbon perspective; on average they are reused 18 times.

All this, though, is what happens before you find yourself staring perplexedly into the abyss of your recycling boxes.

Across the country there are more than 350 different collection methods. Speed ​​of collection is prioritized in densely populated areas, leading to an abundance of co-mingled collections, which then reduces the quality of collected materials and means contamination is more likely to happen.

“You can help by always rinsing out your food and drink packaging and allowing it to dry before you put it in the recycling bin,” says Piper.

And the last thing you should do is indulge in what he calls “wishcycling” – when you put something in a recycling bin that cannot be recycled, in the hope that somehow it will be. “This can be worse than throwing something away that could be recycled, due to the impact of contamination on other products that can be recycled.” Over 80 per cent of people admit to wishcycling. “And it appears to be increasing, as people respond to the greater focus in the media on the damage that packaging can have on the environment.”

Plastic films and flexibles, such as carrier bags or vegetable bags, make up the most wish-cycled items. Other major contaminants include drinking glasses, kitchenware, clothes and nappies, which can affect a whole load of recycling, meaning it could all be sent for incineration or landfill.

Other common culprits include batteries, toothpaste tubes, plastic toys and cartons being put in the recycling in areas where the council does not collect them. Piper’s simple rule is if there’s a risk of contamination, it’s better to under-recycle than over.

By 2024 it’s hoped that the UK will have more standardized collections. For now, understanding the sorting process may help you to recycle better.

Much of it is automated, but before the machine-led process starts, a manual sorting process often takes place: with a team of people picking any obvious contaminants such as crisp packets, plastic bags, toothpaste tubes and the odd Persian rug, off the conveyor belt.

There are around 85 large Material Recycling Facilities (MRF) currently accredited to receive waste in the UK. They are designed to separate co-mingled recyclables into individual materials before they are sold. Separating materials increases the value of the waste as the separate streams are easier to recycle further down the chain.

Most MRF sorting is based around item size, with small items literally and metaphorically falling through the cracks. This means lids can (and are likely to) get missed by the sorting and recycling process, as they can fall down the various gaps or off the numerous conveyor belts.

In future, Piper looks forward to non-valuable types of plastic becoming more valuable, and therefore recyclable. While he acknowledges he might sound pro-plastic, he prefers to describe himself as packaging agnostic. “What I really want consumers to ask is, ‘Do I need that packaging?’ I’m a big fan of refill stores.”

Ultimately it comes back to “reduce, reuse, recycle”. “Our job as consumers is to start thinking about the whole chain,: says Piper. “Avoid using difficult-to-recycle plastics like polystyrene and PVC. What I’d really like is for us all to be more conscious consumers, but not absorb that simple narrative.”