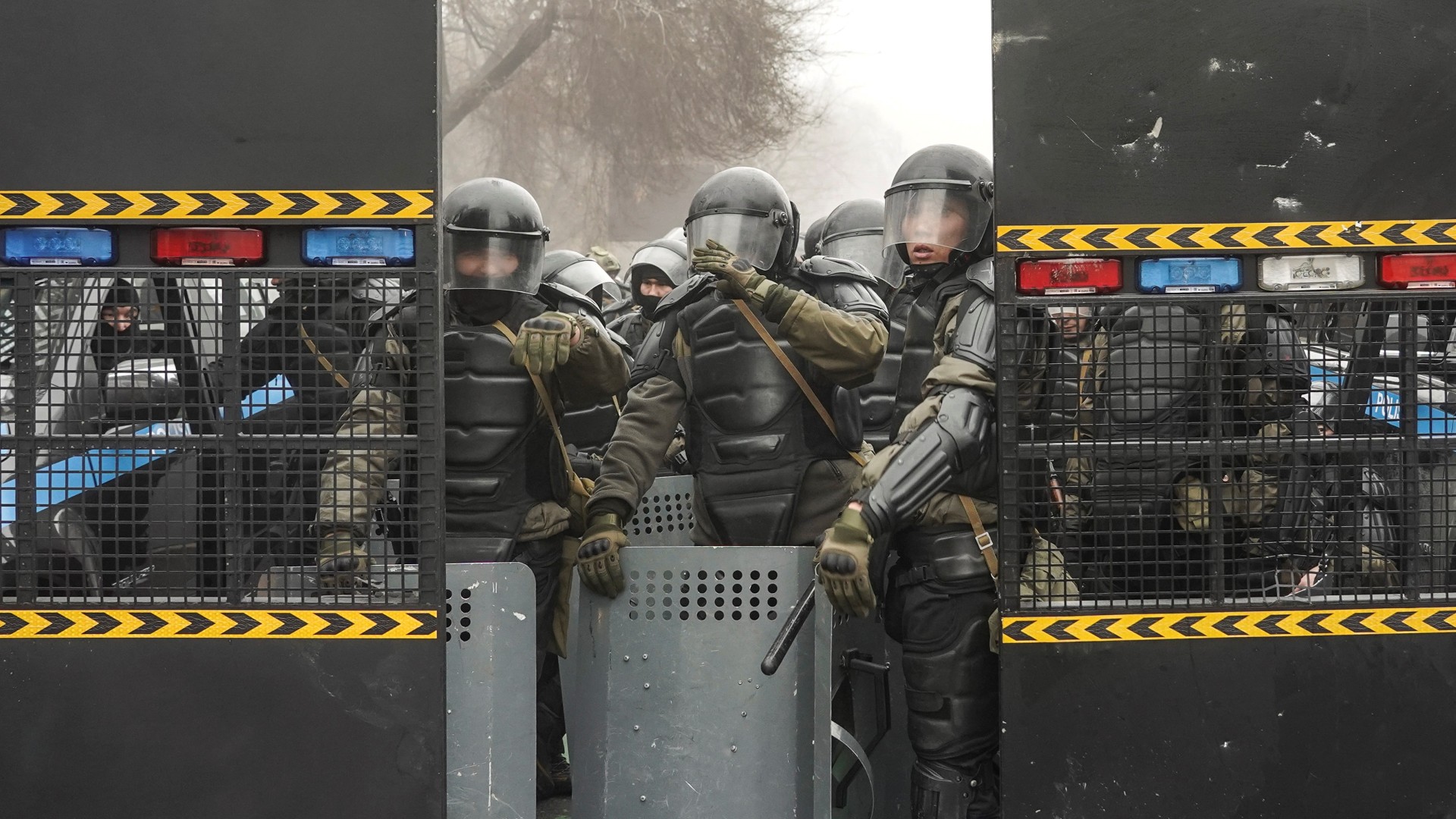 The president of Kazakhstan, Kasim-Yomart Tokáyev, has accepted this Wednesday the resignation of the Kazakh Government presented after the intense protests unleashed by the rise in liquefied gas prices oil, which have left at least ten deaths among police, national guards and military and “dozens” of deaths among protesters in what the police have called an “anti-terrorist operation.”

Tokayev ha assigned to the vice prime minister, Aliján Smailov, the functions of prime minister of the country, thus accepting the resignation of Askar Mamin, although the rest of the Cabinet will continue to exercise its functions until the formation of a new government team. The Kazakh president has also removed the head of the National Security Committee, Karim Masimov.

At least ten uniformed men have died during the day of riots of this Wednesday between police, national guards and military, as reported by the authorities. Later, this Thursday “dozens” of protesters have died in an “antiterrorist operation” in the administrative center of Almaty, the former Kazakh capital and the largest city in the country, where the protests continued. “Dozens of attackers were killed. We establish their identities,” said the spokeswoman for the city police, Saltanat Azirbek, without specifying the exact number, cited by Interfaz-Kazakhstan.

The representative of the police has indicated that during the early hours “extremist forces tried to take over various administrative headquarters, the Almaty police department, as well as various regional police units.” According to local media, machine gun bursts are heard in the city and on social media users report that both the police and the military as well as the protesters are armed. “An anti-terrorist operation is underway in the area where three administrative buildings are located. We urge city residents and guests to avoid leaving their homes,” Azirbek said.

For its part, the Collective Security Treaty Organization (CSTO), a military alliance that brings together six former Soviet republics, has sent this Thursday a “peace contingent” to Kazakhstan at the request of that country’s authorities, made up of military personnel from Russia, Belarus, Armenia, Kyrgyzstan and Tajikistan. “In accordance with the decision of the CSTO Collective Security Council approved on January 6, a peace contingent was sent to Kazakhstan for a limited period of time (…) in order to stabilize and normalize the situation” in the Central Asian nation, the entity has reported, cited by Interfax.

Before accepting the resignation of the Government, Tokáyev has signed a decree to establish a state of emergency until January 19 in the Almaty city and the western Mangystau region, where the protests originated this past Sunday. According to Russian media, the authorities have the state of emergency extended to the entire national territory.

“Dear compatriots, I again appeal to you to be prudent and not succumb to internal and external provocations “Tokáyev said in a televised speech.

Faced with the protesters’ attacks against the forces of order, the Kazakh president recalled that robbing official buildings is “a crime that will be punished.” “We don’t need a conflict, but have mutual trust and dialogue, “he said.

According to the Ministry of the Interior, as a result of the clashes between law enforcement officers and the crowd, eight people, belonging to the Police and National Guard corps, have died. What’s more, two soldiers have lost their lives during the assault on the Almaty airport, occupied during the afternoon by protesters.

During the protests they have been more than 200 people arrested for “acts of violence against the representatives of the law, vandalism and attacks against state institutions” that have caused injuries to 317 officers and damage to 37 vehicles from the police.

State television reported on Thursday that the National Bank of Kazakhstan has decided to suspend all financial institutions.

Assault on the seat of the Government

More than 1,000 protesters have stormed the Government headquarters in Almaty this Wednesday, where a fire and shots and machine-gun bursts have been heard. According to the Interfax-Kazakhstan agency, flames and intense smoke can be seen from the windows on the second floor of the building.

The protesters have forced the agents to retreat to the streets surrounding the government headquarters and have stripped several of them of their shields and bulletproof vests. In addition, in much of the country, Internet services and mobile telephony has been limited.

In Aktobe, a city in the west of the country, protesters have managed to break into the local administrative headquarters, besieged by more than a thousand people, while in Kostanái, in northern Kazakhstan, dozens of people have gathered in front of the Local Management.

Protesters have also taken control of the Almaty airport and all flights to and from the city have been temporarily canceled. The airport authorities have already confirmed the release from the airport thanks to a special operation. According to witnesses cited by local agencies, the airfield is devastated, the windows of cafeterias and shops are smashed, ATMs looted and several cars are burning in the parking lot.

In addition, the monument honoring former President Nursultan Nazarbayev has been torn down in the city of Taldikorgán. Images of the remains of the monument have been published on Telegram channels that report on the riots.

The president promises a “tough” answer

President Tokáyev has assumed the presidency of the country’s Security Council and in a televised speech he promised that will act with “maximum hardness” in the face of the worst riots in more than a decade in the Central Asian republic.

In his speech, the president has also stressed that will not leave the country and would stay in the capital city, Astana. It has also reported that there have been deaths among the security forces, without detailing the exact figure.

Tokáyev has promised to present new proposals to politically transform the country. “I am sticking to my previous position in favor of consequential reforms,” ​​he said.

In a second statement this Wednesday, the Kazakh President has requested military aid from the Russian-led security bloc to overcome what it calls “a terrorist threat” by appealing to the Collective Security Treaty Organization (CSTO), a military alliance made up of Russia, Belarus, Armenia, Kazakhstan, Kyrgyzstan and Tajikistan.

The Prime Minister of Armenia, Nikol Pashinián, has reported on his Facebook account that he has carried out consultations with other leaders of the member countries of the alliance, including Tokáyev.

Russia calls for “dialogue” and the United States denies involvement

Likewise, the ministry has stressed that Moscow “closely observes the events that take place in the neighboring brother country.”

“We trust a prompt normalization of the situation in the country, united with Russia with strategic partnership relations and brotherhood relations, “he added.

For its part, the United States has asked the Kazakh authorities for “calm” and “restraint” and has denied its involvement in the demonstrations. “We support calls for calm, for the protesters to express themselves peacefully and for the authorities to exercise restraint,” White House spokeswoman Jen Psaki said at her daily press conference.

“There are some crazy accusations from Russia that the United States is behind this. Let me make it clear that this is absolutely false, and that it is clearly part of the standard russian disinformation handbook“, has criticized.

The EU calls for “responsibility and restraint”

The European Union has called for “responsibility and restraint” to all parties involved in protests and riots over the rise in gas prices in Kazakhstan.

The community diplomatic service has stressed that it hopes that the protests “remain non-violent and avoid any incitement to violence” and urges the Kazakh authorities to “respect the fundamental right to peaceful protest and proportionality in the use of force when defending their legitimate security interests. “

“Kazakhstan is an important partner for the European Union” and “we count on it to respect its commitments, including freedom of the press and access to information online and outside of it,” the EU stressed.

Rise in the price of liquefied gas

The protests began on January 2 as the price of liquefied natural gas (LNG) rose in the resource-rich western city of Janaozen, before spreading to the main regional city of Aktau on the Caspian Sea.

Faced with the citizen response, the Government has promised to lower fuel prices, But this news for the moment has not had an impact on the magnitude of the protests.

Hours before, the Kazakh leader has asked his compatriots “not to be carried away” by appeals from people who want “dynamite stability” in the largest country in Central Asia and “break the unity” of the people.

He has also promised to study the social and economic demands expressed by the participants during a government meeting this Wednesday.