Skip to content
Home News The future of the covid passport: does it have an expiration date? What about those infected who have had to delay the booster dose? | Society 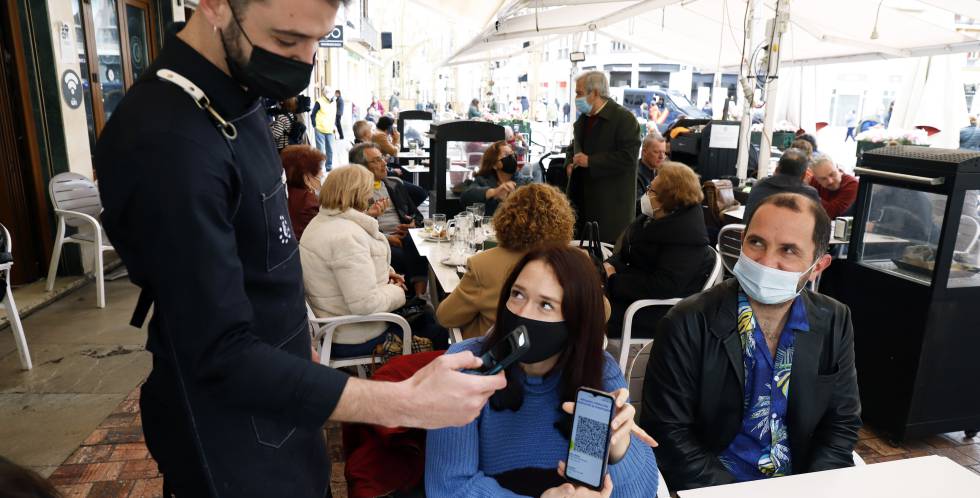 The covid certificate has become one of the weapons to control this pandemic, but its usefulness continues to be questioned by experts. The digital document that certifies that a person has been vaccinated against covid, has recovered from the disease or has a negative test remains a key tool for crossing borders in the European Union, but the evolution of the health crisis itself has already obliged to make changes in the operation of this instrument. As of February 1, the vaccination document in the EU will have an expiration date nine months after receiving the second dose of the vaccine and it will be necessary to inject the booster dose to maintain its validity. But the pandemic is advancing faster than the document and there are new questions to be resolved, such as how long the covid passport will last after the third dose -the EU has not set a deadline-, what will happen if new vaccines arrive or, in the case of Spain, what It will happen with those infected who have had to delay the injection of the booster dose —Health recommends postponing it five months after diagnosis—, point out the experts consulted. These certificates serve to encourage vaccination, but they will not cut the chains of transmission because even vaccinated, recovered from the disease or with a negative test, a person can become infected and spread it.

This week, the Council of the EU adopted new measures associated with the covid certificate that will come into force next month. These are recommendations for all countries, in order to harmonize travel regulations and encourage vaccination of first, second and third doses, but each State has the last word. Following the recommendations of the European Center for Disease Control —that it is advisable to administer a booster dose no later than six months after the end of the first vaccination cycle—, the European Commission has agreed to six months of validity after completing the vaccination schedule and adds a “grace period” of three more months “to ensure that national vaccination campaigns can be adapted and that citizens have access to booster doses.”

The idea was to carry out a more personal and not so territorial management of the passenger circulation control measures. That is, prioritizing the health status of the individual over the epidemiological situation of the country from which they come. But, in practice, each country continues to have control over the final controls at its borders and this harmonization is at the expense of the will of the Member States.

According to Toni Trilla, epidemiologist at the Hospital Clínic and dean of the Faculty of Medicine at the University of Barcelona, ​​“it is evident” that with the omicron variant at stake, “the covid passport does not guarantee that you cannot get infected, but it continues to give a greater security level”. “There is a relative reduction in risk: those who have the vaccination passport now have a lower risk of disease and somewhat reduce the risk of contagion,” defends the specialist.

It remains up in the air, however, whether countries will maintain this homogeneity in travel requirements or impose more measures, such as mandatory PCR or quarantines, regardless of vaccination status. And it also remains to be seen what will be the validity of the vaccine passport reinforced with the third dose. “To date, there are no studies that expressly address the efficacy of booster doses in the transmission of covid-19 and, therefore, it is not possible to determine an acceptance period for booster doses. However, given the new data, it is expected that the protection derived from booster vaccinations may last longer than that derived from the primary vaccination schedule”, justifies the EU on its website.

For Daniel López-Acuña, former director of Emergencies of the World Health Organization (WHO), the vaccination passport has always been an “imperfect” measure: “It is not an epidemiological instrument, but rather intended to control the movement of people. It has more to do with an economic measure and the flow of people because they want to reduce barriers, such as quarantines. They want to simplify the process for people to travel, although, strictly speaking, it does not mean more health protection”. But he points out, however, that this instrument has served to “induce vaccination.” Precisely, a preliminary study (not yet peer-reviewed or published in a scientific journal) with data from Italy, France and Germany, concluded that, from the summer of 2021 until the end of the year, the covid passport requirement has allowed a increase in vaccination rates of around 13 percentage points of the total population in France, 6.2 points in Germany and 9.7 points in Italy.

López-Acuña laments the “lack of coordination” between countries and warns that, with changes in the evolution of the pandemic and control measures, such as the vaccines themselves, “everything will be very relative”: “What will happen if Is there another formulation of the vaccine that covers other variants? What will be valid? Two doses? Three? We are entering a tangle. There is a failure of health coordination at the European level and other areas, such as the economy or tourism, are moving forward.

The evolution of the pandemic predicts even more complex scenarios of coordination between the covid passport and the reality of the epidemic. For example, among people who have not completed the initial vaccination schedule by medical prescription —they have not completed the immunization due to the risk of severe allergy or have suffered a severe reaction after the first puncture— and do not have access to the vaccination certificate or to a medical exemption.

Another example of citizens who are left in a kind of limbo is that of recently infected people. The new guideline of the Ministry of Health indicates that, although covid-infected people are allowed to receive the third dose after four weeks of diagnosis, the recommendation of the health authorities is that they are pricked five months after passing the illness. This leaves, de facto, millions of people in an administrative limbo with the vaccination passport, since they will have exceeded nine months since the second dose, their passport will have expired, but they still must not receive the third dose to extend its validity because Health considers more pertinent to wait five months.

The solution, according to Health, is to inject the third dose before those recommended five months -experts point out that there is no danger, although the benefit of the vaccine is further optimized after several months of infection- or that they recur, during that interval of time, to a certificate of recovery or negative test to move freely within the EU. But these options also have their complications. To begin with, because the document that notifies having passed the disease is only administered to people with a positive PCR that confirms the diagnosis and, in this sixth wave, the collapse of care was such that thousands of people self-diagnosed from home with antigen tests. . “What a person is going to have to do is do it privately, pay for a PCR, and that is an access barrier,” says López-Acuña.

Beyond its use at borders, the covid passport has also been installed in Spain as a safe-conduct to access certain public spaces, such as inside restaurants, theaters or nightclubs. But the situation is unequal between communities and, although there are autonomies that request it, such as Andalusia or the Canary Islands, there are others that have never requested it (Madrid) and autonomies that have stopped doing so, such as Cantabria or Catalonia.

Alberto Infante, emeritus professor of International Health at the National School of Health of the Carlos III Health Institute, points out that the covid passport has two dimensions: “the practical effects and the symbolic meaning of the message to citizens.” And he explains: “When it became widespread in Europe [en junio de 2021], it was no longer a very effective measure to reduce transmission, its effects were limited beyond encouraging vaccination. But now we are in a different moment, of very high transmission, and removing the passport now sends a symbolic message of withdrawal of restrictions that supports the idea that the worst is over. And it is not like that”.