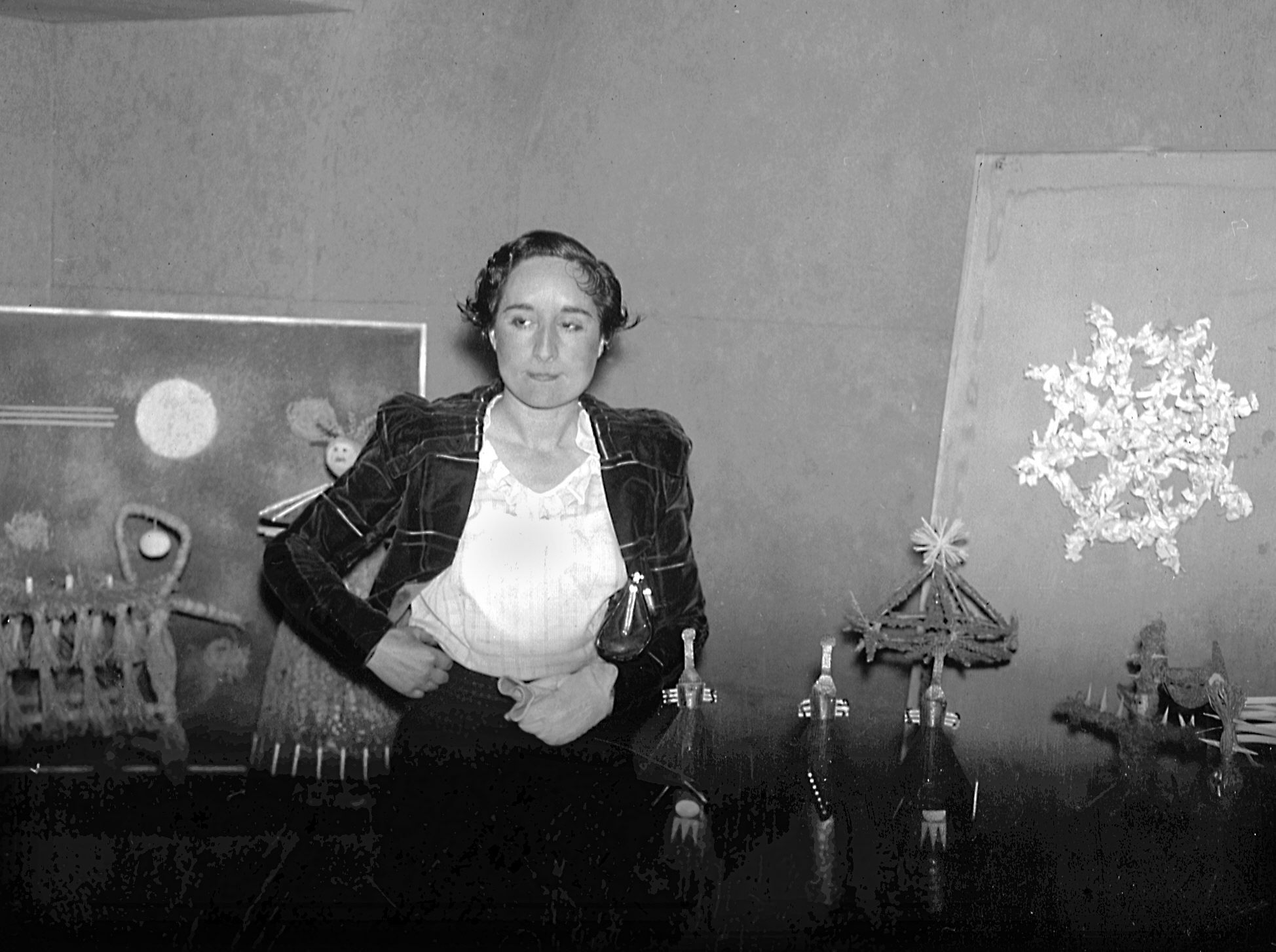 The journalist Paloma Chamorro interviewed Maruja Mallo in the late 1970s on the program ‘Images’ of TVE. To the question: “Do you deeply believe in science?”, The artist answered defiantly: “Sure. For me, life on this planet is art, science or war.” Refined woman, of an admirable intellectual level and of wide and deep culture, Mallo displayed an image of a mask on the screens of the Transition of Carnival as excessive as the one that her old friend Dalí had displayed, painted exaggeratedly and as a transvestite of herself. Proud and sly she was shelving his memories and sending messages of committed sincerity: “I have a lot of faith in youth, because of how after these sinister forty years they have rebelled with a vitality and a desire for knowledge, both in science and in art that I experience with them,” he stated in the same interview.

“For me, life on this planet is art, science, or war“

With that Spanish youth of the Transition he was in permanent contact. The art historian Juan Pérez de Ayala She remembers meetings that were organized to entertain her in the eighties and how when she went to visit her in 1990, she told her that he liked receiving postcards to still be “in touch with the outside world”: “In that same year I remember that I traveled to Egypt in January and I could not, for less, send him a postcard of the profile of the bust of Nefertiti that is in Berlin; and that in that same summer I traveled to Mexico again where I could not either avoid the temptation to send you a profile of a monumental Olmec head from the Jalisco museum. Upon my return, the two profiles were together composing a work, as if they were a Portrait bidimensional in both of his profiles, which, even though I intended, I didn’t know if it was going to happen. And that Maruja, pointing to them, whispered to me: “Mexico … Egypt …”

In recent years, there have been retrospective exhibitions of Mallo’s work or his presence in group shows. Perhaps it was in those “sinister years” in which its importance was erased in Spain, but outside our borders was always valued within the elite of the artistic avant-gardes. “She is the most important Spanish painter of the XX next to María Blanchard and it even goes further than Blanchard. I have always defended that the creative and plastic world of Maruja is as important and innovative as that of a Georgia O Keeffe or a Frida Kahlo “, she says Guillermo de Osma, art historian and gallery owner who has contributed enormously to keeping his work alive.

“She is one of the most innovative and interesting painters of the Spanish and international avant-garde. Not only for her mastery of pictorial technique and geometry, but also for her absolutely personal and original imagery, for his knowledge of the history of art and of different mythologies and philosophical currents. In addition, it offers a completely different perspective from the male avant-garde“, corroborates Alejandra Zanetta, Professor at Akron University of Ohio (USA) and author of the book La subversion enmascarada. Analysis of the work of Maruja Mallo.

Born in Viveiro (Lugo) on January 5, 1902, she moved with her family to Madrid, where she studied Fine Arts. Her triumph was early and she soon traveled to Paris, where she was enthusiastically received by the leading representatives of Surrealism. He escaped from civil war to Portugal from where, with the help of the Chilean diplomat Gabriela Mistral, was able to travel to Buenos Aires. In America he spent about thirty yearss until his return to Spain in 1964

From then on, in interviews always they asked him about his classmates from the Generation of 27. She liked to remember how she met at the Academy of Fine Arts Salvador Dali, What they shared his admiration for Picasso, how he introduced you to Federico García Lorca and Luis Buñuel, the most promising of the Student Residence. It also described the moment of rebellion that gave the name to the generation of the “Sinombrero”: “Everyone wore a hat. It was like a prognosis of social difference. One fine day, Federico, Dalí, me and Margarita Manso, another student, occurred to us to take off our hats and when we went through the Puerta del Sol they stoned us and they insulted us. We had to go through the mouth of the subway. Federico wanted to prevent insults because they called us fags, as if taking off our hats were a manifestation of the third sex. Instead, Dalí said that we were and that increased the insults “.

“Dalí, Lorca, Margarita Manso and I had the idea to take off our hats and they stoned us“

Mallo participated in the parties, the trips and the mischief of that unrepeatable group of artists, marking a own profile of transgression, also from socially established female stereotypes. Even, as Guillermo de Osma points out, beat Buñuel in the profanity contest which was organized on one occasion. From In 1926 his paintings already revealed his genius and the series entitled “Verbenas” obtained such recognition from Ortega y Gasset that to show it, the first and only eexhibition organized by the Revista de Occidente.

Did the brightness of his companions obscure Mallo as it did other Generation of 27 writers in exile? Guillermo de Osma doesn’t believe it: “Her work is extraordinarily powerful, just like her. She had enormous self-confidence that helped no one eat her territory. When she arrived in Argentina she did it as the great Spanish painter. He had a lot of strength and a sense of his own image. The first thing she did when she arrived in Buenos Aires was to go to the best photographer of the moment to take the portraits that later served to promote her work in books and exhibitions. “

“She had enormous self-confidence, which helped no one eat her ground“

Alejandra Zanetta is not so optimistic and believes that Mallo knew that he had to join that group in order to gain access to the centers of artistic influence: “Within the centers that produce and disseminate culture at the time, such as the prestigious Residencia de Estudiantes, the opinion on the woman did not differ much from the one that spread from the pages of the magazines of the time “. Mallo had to overcome, then, an environment that would never have valued her the same as men: “Considering Mallo’s optimistic, vital and combative personality and his acid sense of humor, it is not unreasonable to imagine that used irony and indirect criticism to mock and to expose the absurdity, contradictory and archaic of such a position “, concludes Zanetta.

A rich and committed work

Throughout his life, Mallo worked on ceramics, scenography, theatrical costume design or was author of large murals, but she is remembered mainly for her paintings. In each of the series in which she develops her work, that she did not like to classify in a specific movementNot even in the surrealism with which it is most associated. In the “Verbenas” the joy of life was presented through the coloring and dynamism of the forms in a constant circular movement. “His first canvases stand out for their almost muralist monumentalism and for having as protagonists strong, independent women in control of their body and their destiny: The Goat Woman, Cyclist, Tennis Woman from 1927 and Two Women on the Beach from 1928. This trend continues in the Verbenas “, explains Alejandra Zanetta.

After the series “Estampas”, where it reflects the avant-garde trends of the moment, completely changes its focus, is part of the Vallecas School and -as from day to night, as she herself used to say- changes the side of the coin in its series “Sewers and Campanarios”. They are paintings linked to the Castilian landscape, in which he paints skeletons, waste, stones, practically in black and white, with touches of yellow and green of hatred and despair, a fierce criticism of the worst in society and religious obscurantism. It is the one that will triumph in Paris in the 1932 exhibition. In those years the influence of Joaquín Torres García and constructivism: “That will be fundamental. From then on, all her work will be based on a geometric construction based on the classroom proportion and she will create what she calls harmonic lines, which are geometric structures on which he bases his work “, explains Guillermo de Osma.

The series “The religion of work” began in 1936 with ‘The wheat surprise’. Those women from whose hands spikes grow have become almost the most recognized and recognizable image of Maruja Mallo and inaugurate her American phase. Scholars of his work agree on the fascination he felt for the variety of nature and human geography of America, which he reflected in his following series: Living Natures, Two-Dimensional Portraits or Masks. Flowers, conches, and again portraits of women of different ethnic traits with whom he wanted to vindicate: “Races that had the right to live and that had been defeated by the submission of arms.”

Maruja mallo died in Madrid on February 6, 1995. He had stopped painting just a few years before. Her last stage, already in Spain, had led her to investigate new universes through Albert Einstein’s theory of relativity, in the series entitled: “Vacuum Dwellers”.