Skip to content
Home News The first day of childhood vaccination leaves long lines and a great reception: “Spain will be an example again” | Society 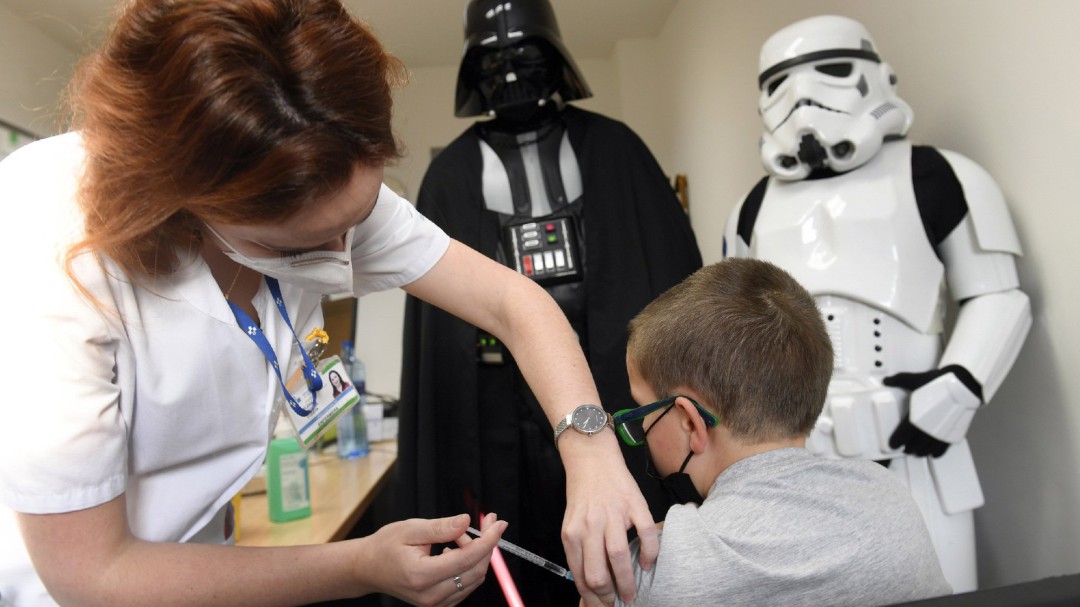 December 15 was marked on the calendar by many families and especially by the little ones. And it is that the childhood vaccination against the coronavirus has begun this Wednesday in all Spain, with a very positive response among minors and their families, who have encouraged those who had certain fears of receiving the puncture.

The Minister of Health, Carolina Darias, has been present at the start of the vaccination campaign for children between 5 and 11 years old and has done so in a health center in Toledo where she has underlined the “extraordinary” response of the families to vaccinate her children and has been convinced that it will continue like this.

An idea that the President of the Government, Pedro Sánchez, has also remarked, convinced that with pediatric vaccines “Spain will once again be an example to the world of vaccination”, as has already happened with the elderly and the young. In addition, Darias has chosen to go on this important day for vaccination in Spain to the same autonomy in which Araceli was vaccinated almost a year ago, the first Spanish to be immunized against the coronavirus.

In this community, the regional government has had to extend the vaccination this afternoon in the educational centers of Toledo, Cuenca and Guadalajara, since at the scheduled end time, 6:00 p.m., there were long lines.

“I was very scared, but they grabbed my arm, they told me to look the other way and it didn’t hurt … Then, when I saw that it didn’t hurt, and when they put the second dose, I will no longer have fear, “said Lucía García, one of the Segovian girls vaccinated this Wednesday.

Other mothers insisted on the responsibility of getting vaccinated, such as Isabel Alonso, who left the Pedro Delgado de Segovia pavilion at four in the afternoon this Wednesday with her son, Alberto Sánchez, recently vaccinated. When journalists have asked her why she had decided to vaccinate her son, she replied that she was doing it “for everyone.”

Castilla y León trusts that all the children between five and eleven years of age in the Community, some 140,000, can have the first of the two doses of the vaccine administered at the end of January, if the vials that the Ministry of Health has committed arrive .

In Extremadura, children have begun to be vaccinated in 61 Extremadura schools, with expectant parents but generally convinced of the need to immunize their children. According to the regional government, the authorization to vaccinate them has been “massive”, and it is expected to reach 30,000 vaccinated children before the holidays.

The Valencian Community has also chosen to vaccinate in the classrooms, where the day has passed in an atmosphere of seriousness and commitment on the part of the students, who take a break of about 30 minutes to receive the first dose and immediately return to their school routine . ORA total of 10,016 schoolchildren from 159 educational centers have already received the first dose of the vaccine. Between 60 and 80% of Valencian parents have authorized, for the moment, the vaccination of their children against COVID, according to the first data collected by the Ministry of Health.

“I work in an institute and I think I have a higher risk of contagion. I prefer my children to be vaccinated. Each one to do what they believe, but I think it is to lengthen the inevitable, because in the end they will ask us for a COVID passport for everything. Better to be safe, I would tell parents not to be convinced, “said Susana Puebla about the vaccination of her children at the Antonio Machado school in Valencia.

There have also been grandmothers who have accompanied the students in this ordeal. “My grandson told me that he was not going to look at the needle, that he was nervous, but in the end he didn’t even notice it,” explains one of them at the doors of this same school to EFE. A total of 3.3 million children will receive Pfizer’s pediatric formula consisting of 10 micrograms, one-third of that administered to adults.

This great reception was in a certain way predictable, if one looks at the data of the previous appointments arranged by the parents of the minors. ANDn Catalonia, more than 45,000 appointments were booked in the first hours of the service opening last Monday, while in Euskadi more than 16,000 were awarded in just four hours.

In Cantabria, 3,684 self-citations were arranged in the early hours of Monday and Galicia plans to inoculate the first 60,000 doses between December 15 and 18 to children between 11 and 9 years old.