The Petitions Committee of the European Parliament (EP) has approved a document in which it recommends that Spain explore the possibility of recognize the crimes of the terrorist gang ETA as crimes of It hurts humanity for what they do not prescribe nor can they be amnestiable even if they were committed before this figure entered the Penal Code in 2004, an option that the National High Court has ruled out.

The final report after mission of the Committee on Petitions of the European Parliament, which visited the Basque Country and Madrid in November of 2021 has been approved this Thursday by 27 votes in favour, three against and three abstentions.

This report includes the suggestion to the Spanish authorities of “exhaust the interpretive possibilities of criminal law” to give this differentiated treatment to the more than 300 ETA murders still unsolved (they point to a total of 379).

This recommendation was included in the final text despite the fact that the National High Court had already ruled out the possibility of judging ETA’s crimes prior to 2004, the year in which this typification entered the Penal Code Spanish.

There is only one open procedure of these characteristics in Spain against ETA leaders, which in 2015 charged Mikel Karrera ‘Ata’, Aitzol Iriondo ‘Gurbitz’, Garikoitz Aspiazu ‘Txeroki’ and José Antonio Urrutikoetxea ‘Josu Ternera’ with gang murders committed under his command. Precisely, one of the amendments agreed by the Committee on Petitions has been to urge the National High Court to report on the procedural situation of these defendants.

See also  The city is being wiped off the map

A large part of the more than 300 murders that remain unsolved ten years after the end of the gang’s violence date from late 70’s and early 80’swhen I was much more difficult to investigate these crimes due to lack of resources, so they could not be judged under a definition included in the Penal Code in 2004.

The PSOE had tried to eliminate this suggestion through a amendment alleging precisely that it is not possible to apply lese humanity for those crimes committed before said year and that requesting it would contravene the principle of criminal legality that the Constitution includes.

“We perfectly understand the claims of the victims in this sense, but it is necessary that we promote respect for the law and be aware of the impossibility of retrospectively applying the application of crimes against humanity in order to prevent ETA crimes from being able to prescribe “, said the socialist deputy Cristina Maestre, who promoted this and other amendments to the text.

The report, for its part, also recalls that they have already presented “several initiatives to amend the Criminal Code for the principle of legality to be interpreted in accordance with the International right”a reform option that other Spanish deputies already pointed out during the debates in committee.

Recommends that ETA leaders be tried for crimes

One of the approved recommendations aims to explore the possibility that the members of the ETA leadership at the time the various unsolved attacks were committed could be prosecuted as instigators of the crime.

It also recommends that prison benefits and the treatment that can be granted to those sentenced are linked to “your collaboration in the resolution of all the attacks of which they are aware”.

They also propose establishing legal mechanisms to criminalize the glorification of an attack or promote efforts to “avoid public glorification” of convicted terrorists when they are released from prison, as well as form ato the commission of jurists to prepare reports on each of the unsolved cases of murder

“From the European Parliament we are sending a strong, clear and firm message of support for victims of terrorism. No complacency with terrorists. It is difficult to understand the position of the Spanish socialists presenting this type of amendments”, the PP deputy and president of the Petitions Committee, said in a statement, Dolores Montserrat.

Also Maite Pagazaurtundúa (Citizens), whose brother Joseba was assassinated by ETA in 2003, has celebrated that the report puts “in black on white the history of the persecution of a part of the Basque population and the difficult and sacrificial work of those who maintained the democratic rule of law”.

Likewise, he has affirmed that he collects “what the main associations of victims and their technicians demanded” during the mission of the deputies. “We have voted on the amendments and each one has been portrayed,” added the orange deputy.

Satisfaction among victims of terrorism

For its part, the Association of Victims of Terrorism (AVT) has valued “positively” the decision of the European Parliament. “Regardless of whether this materializes, something that we see as very complicated, we will always look favorably on all the measures and proposals in favor of the victims of terrorism, who must be the winners of these more than fifty years of terrorism that we have suffered in our country”, they have pointed out from the organization.

The association’s lawyer Dignity and Justice and sole petitioner of the file on the unpunished ETA murders, Miguel Ángel Rodríguez, has celebrated that the European Parliament has collected in the report all the claims that were made to him, including the number of unsolved crimes that he himself compiled in more than 1,700 pages of documentation.

“Today the end of ETA’s impunity is one step closer. It has been six years of work and appearances in Brussels to get to this day, and another year and a half of work that I dedicated to writing the more than 1,700 pages of documentation that we present demonstrating those 379 unsolved cases, but without a doubt it has been worth it,” Rodríguez told Efe. 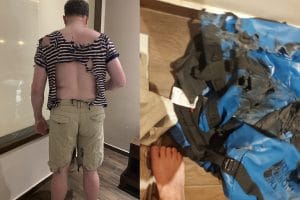 ‘My husband looks like a pirate!’: Etihad passenger receives shredded luggage after flight