The man rose from his bed and packed a small bag with a change of clothes, his toothbrush, washing kit and three books. Then he fed his dog, his only companion, for the last time, said goodbye to the animal and let it out of the door.

He felt like crying. The taps had not worked for weeks so he had a glass of boiled rainwater, composed himself and began his walk to the rescue rendezvous.

The streets were empty. Glass and rubble crunched underfoot. Oleh Shtogrin, a 53-year-old miner, was familiar with the sounds of the weaponry wrecking the city around him so when three explosions happened near by he told me that he knew that one set came from Grad rockets another from mortars and the last from a howitzer.

After 50 minutes’ walk to an address texted to his phone, he came to a small courtyard and stepped into the cover of a building. There he waited for an Englishman in a Hyundai.

A couple of miles east across the river, in the eastern mining city of Severodonetsk, Yuri and Raisa Sergienko, retired chemistry technicians, also packed a bag and gathered their documents. The shelling had been getting worse in the streets around them ever since Russia had switched its focus of attack on to the Donbas region a week ago, reducing the city to a place of emptiness, shell craters, scattered debris and dangling tramlines.

On the phone from western Ukraine the couple’s two adult sons had urged them to leave Severodonetsk and escape before it was fully encircled like Mariupol. “Our sons told us that if we didn’t leave we’d end up starving, besieged and drinking water from the radiators,” Raisa, 61, said. “We endured one more night of shelling then we called the special number too. We were given a rendezvous location and a time and were told the driver would be a foreigner.”

The couple locked their flat, where they had lived throughout their 40 years of marriage and gave the keys to one of the few remaining neighbours. Then they too began to walk through the rubble-strewn streets to a rendezvous for rescue, just as Shtogrin had on the other side of the river. The lone Englishman would take them all.

Dave Young, a Russian-speaking specialist driver for the Ukrainian charity collective HelpPeople, has rescued 46 Ukrainians in 14 separate runs from battle zones in eastern Ukraine over the past three weeks.

He was born in Birkenhead but was living in Kyiv when the Russian invasion began, working as a lamp designer. Eschewing all offers of evacuation by Britain’s Foreign Office, he instead volunteered for an evacuation mission to rescue civilians trapped in the regions severely affected by fighting.

Now he lives in temporary accommodation in Dnipro with a collective of Ukrainian volunteer drivers, receiving missions to go to some of the most dangerous areas of the war and rescue those trapped there. At the heart of his decision to stay lies a deep affection for the Ukrainians among whom he has lived since moving to Kyiv 16 years ago. He works for no payment.

“Across the years I have got to know and understand the many levels of Ukrainians. I have great admiration for them, the way they think and their great communal bond,” he told me. “I wanted to be easy with myself in my own mind once this war is over. I wanted to know that I had done all I could to help people in this situation, not to shirk a task or do less than I could have.” 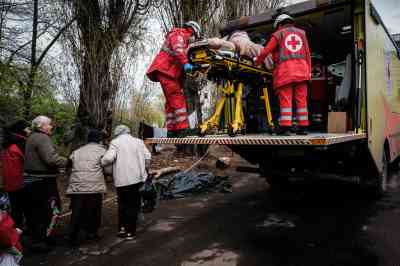 I accompanied Young on his evacuation mission to Severodonetsk on Friday. He stepped into his car alone in Dnipro not long after sunrise with only map pins on his smartphone to mark the location of the pick-ups, the number of people to collect at each site and their phone numbers. Then he drove 200 miles northeast into the heart of the war zone to rescue them.

Deep in the Donbas, Severodonetsk is one of the main targets for capture by the Russian forces pushing towards it from the east. The city is under heavy bombardment and under additional threat from encirclement by Russian units to its rear. Of three bridges that once led to it across the Seversky Donets River, only one narrow bridge remains intact, with a Ukrainian military lorry slewed halfway over its edge.

Black columns of smoke drifted up from the city’s northern side as Young approached. Once his car had crossed the bridge and entered the city the vista was a dystopian vision of upturned shell-blasted vehicles, scattered rubble, minefields, tank obstacles and barricaded streets. Emphasizing the threat, before he had even crossed the bridge Young received a call alerting him that two other drivers from the collective had been wounded on missions near by. It was his fifth mission from him there.

“My first task to this city was a real baptism of fire,” he said. “The shelling was intense. I had no experience of anything like it before. There was no one in sight apart from a couple of soldiers, totally freaked out with fear, crouching for cover by the side of the street, yelling at me to flee. I pulled back a few blocks, gathered my thoughts and felt I couldn’t let down my ‘clients’. I went in again, grabbed them and made it out. Back in our accommodation that night in Dnipro with the other drivers it felt like I had just lost my virginity. They realized I was serious. Now we’ve become as close as brothers.” 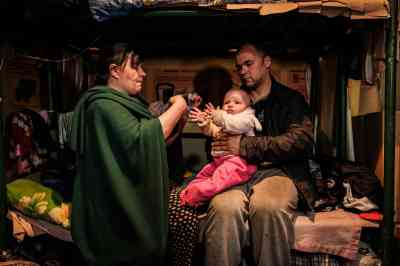 Severodonetsk is one of the principal targets for capture by the Russian forces pushing towards it from the east, forcing its population to live in bunkers

He wove around the debris in the abandoned streets, at one point halting to disentangle shredded overhead tram cables from his car. At the first pick-up point the four Ukrainians whom he had been tasked to collect appeared too scared to leave their shelter and risk the journey out. Four times he called them to say he was at the rendezvous. Four times they hung up.

“It isn’t the first time people have refused evacuation at the last minute due to fear,” Young observed. “If they have spent too long living underground, their spirit becomes crushed. They are frightened of everything, and very frightened of the journey out. I try to break through that, but it is extremely hard once they are in that space. Sometimes they change their minds at the last minute and prefer to stay hiding underground to await their fate.”

At the subsequent rendezvous point in the broken city a few minutes later, besides a newly dug bunker where the tail of a rocket protruded from the tarmac, the next pair of evacuees were bolder: Yuri and Raisa Sergienko ran to his car and leapt inside. Young weaved back through the empty streets, passing Ukrainian positions where British NLAW anti-tank weapons sat ready for action to counter Russian armou, and hungry packs of abandoned dogs patrolled in search of food. 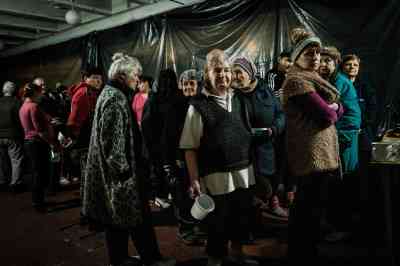 Many residents of Severodonetsk have spent so long living underground that they are too afraid to venture out for evacuation, Young said

Across the bridge in Lysychansk, only a little less affected by bombardment, Young located the pick-up point to collect Oleh Shtogrin, and began his drive with the evacuations back to the relative safety of Dnipro. The Englishman looked thin and worn and despite the sudden appearance of two attack jets flying low overhead — no one knew if they were Ukrainian or Russian — the long road out brought burdens that were more emotional than fearful as the Ukrainian evacuees began to discuss their farewells to their homes, the violence, fear and depredations, and the dawning realization of a new life as refugees.

The miner, Shtogrin, seemed resolute in his solitude, until he talked of saying goodbye to his dog and choked. Raisa Sergienko’s eyes clouded with tears as she caught a sudden vision of normality passing through a town in a safe area 100 miles away from Severodonetsk — men played football in a field, traffic lights worked and commuters passed by in a bus.

“You start the game knowing little, then the emotional wave wipes you out,” Young said. “You take on board the emotions of your passengers. You don’t sleep much, very wired. There is the road, a hard road. It wears you down. You get back from a task, drop off people in the safety of Dnipro, usually at the train station, have a vodka with the boys, try to sleep, then repeat. But I’ll keep going with it until I am too broken to do it, or there are too many volunteers for me to be needed.

“I am blessed to see so much in front of my eyes at one moment and to feel it; to help and to share their experience in this rhythm of war. It is nothing compared to being a soldier on the front line, but this is a thing I feel I should be doing, and I am glad I found it.”