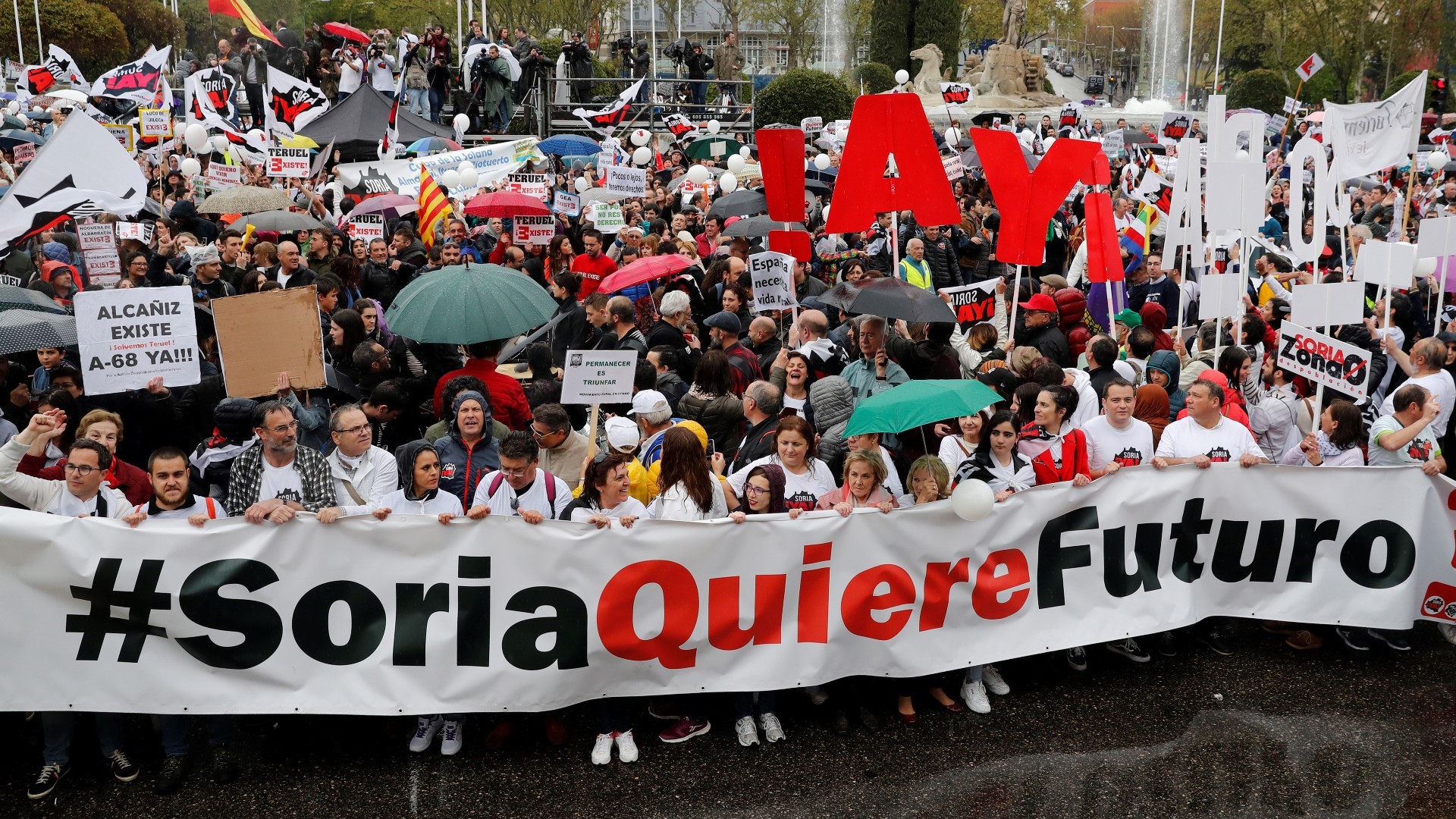 They have been fighting for years for decent living conditions in a Spain that politics has been leaving “forgotten” and “abandoned” for decades. It is rural Spain and that of small towns. That where life is uphill when you want to start a business, go to the doctor or educate your children because basic services are often insufficient. Now the Spain Vaciada Coordinator has decided to go one step further and it is being assembled as an electoral platform for the next elections that are to come in order to be a determining political actor and fight from the Congress or the regional parliaments to reverse depopulation: “We are clear about what we need and what we deserve by right.”

With the possibility that there is a electoral advance in Andalusia and another in Castilla y León, the Coordinadora España Vaciada, made up of some 170 associations present in 25 provinces and in twelve autonomous communities, agreed in September at its III General Assembly held in Priego (Cuenca) launch your political project and have your electoral platform ready by the end of the year or, at the latest, in early 2022: “We are setting those deadlines and we want to be ready” for those possible elections, one of its coordinators, Antonio Sanz, said on TVE.

Not all the associations that make up the Coordinator have supported making the leap to politics, but most have, at the same time that they will continue working as a social and citizen movement to fight, claim rights, and put depopulation on the political agenda.

“Teruel Existe is our benchmark”

“Teruel Existe is our benchmark”, tells RTVE.es Vanesa García, spokesperson for Soria ¡Ya! and member of the Coordinadora de la España Vaciada. “We have seen how a single deputy and two senators have achieved for Teruel and for emptied Spain much more than in other years our political representatives. That has given us strength, has encouraged us, “he adds. All from a movement, he emphasizes, that is born from the citizens themselves, from people who “were not politicians by profession.”

And they already have a first survey, Sociometrica for The Spanish, that foresees that emptied Spain can get 15 seats in a hypothetical general election. “Surveys are key for this type of formations that start from scratch, set expectationsThey make the training known and make people start to be interested in them ”, underlines the political scientist and advisor in political communication Mireia Castelló.

The political scientist and professor at the University of Barcelona Jesús Palomar believes that, if they achieve a good representation of ten, twelve or fifteen deputies they can “get things” really important for their territories. “If Teruel Existe has already achieved something, now they could have a much greater weight in national politics, they would no longer be an anecdote but they could be as relevant for an investiture or for some Budgets as the PNV or ERC are currently”. Furthermore, it points out that many of your requests would be easily acceptable on the part of a Government: “They are not going to ask for an international airport, but surely very basic and elementary services. Needs that, if they have not been covered, it is because until now no one had asked for them ”.

See also  What are interlinked smoke alarms? Where to get them and new Scottish smoke alarm law, explained

The representation of rural Spain is gaining strength in Spanish politics

But the elections are still distant and much remains to be done. Now, the main challenge is in choosing the way in which they will attend to some elections: whether as a political party, or as an electoral group (Each association is presented in its territory with its initials and then they converge). “We’re on that. You have just started that table to work and you are going to evaluate all the possible options and, afterwards, each one will choose. Everyone is free to do what they consider ”, explains García.

101 measures to “unite” and “backbone” Spain

What they are clear about is his project, a ‘Emptied Spain Development Model’ with 101 measures to “unite” and “structure” the Spanish territory and end depopulation. Among them, they propose a State Pact against Depopulation and Territorial Rebalancing, the qualification of the agri-food and forestry sector as strategic, or the development of infrastructures and roads.

And it is clear that if politicians had taken rural areas and small cities into account in their development plans, their leap into politics would not be necessary. “An attempt has been made to concentrate all services in large cities and it is legislated from those big cities and offices without having knowledge of what the reality of the rural world and small towns is like ”, he laments. Due, “It has been emptied” and has been “looted and deprived of services and infrastructures to a part of the territory ”.

This “abandonment” of the territory has its consequences. Garcia explains how difficult it is to be able to telecommute or start a business when there is no fast internet connection. “In many areas of Soria, it arrives very slowly or it does not even arrive and there are areas where there is not even mobile coverage, we can’t call ”, he laments. There are places, he adds, where the nearest health center is “80 or 90 kilometers away” and for many services “you depend on the particular car” because not enough public transport. Not to mention locations without pharmacies, ATMs or even barracks of the Civil Guard. And the list goes on with a long etcetera.

See also  Cameron Boyce: The parents of the Disney Channel star open up on his sudden death aged 20

Faced with all these difficulties, emptied Spain gained momentum in 2019 and raised its voice with a large demonstration in Madrid for which they chartered 350 buses from different territories. That ‘Revolt’, as they called it, was held a month before the general elections of April 28 and had its echo in the speeches of the candidates and in the campaign.

Without ideology: “Our goal is people, not political confrontation”

But they complain that the traditional parties and the generalists have not opted for real and sufficient policies to reverse the situation: “We are so used to being promised things (…) If our politicians took our measures as part of their electoral project, we would be happy, because we are not concerned with who does things or who takes credit for it, but rather that things get done, ”says García.

Therefore, the aspiration they have is that they can form a parliamentary group “To have more influence and decision-making capacity on important issues.” They assure that they have no ideology in terms of left-right, but its objective is to facilitate an investiture and “that there is a Government” of the color that is: “Because without government, there are no budgets and without budgets there is no money”. “This it is not about matches or colors but from the common ideology of territorial balance and of reversing depopulation. Our main objective is people, not the political confrontation, “he emphasizes.

Of course, in order to support this investiture, Spain Emptied assures that “there would, of course, be require a minimum, some measures to reverse depopulation ”. Some measures, he adds, common to all depopulated areas: “What is clear is that we are not like the nationalist parties. Our objective is common for all that territory ”.

And it is that Emptied Spain encompasses multiple territories of different provinces and autonomous communities. One of the most significant data on the depopulation that Spain is experiencing is that, in 2020, 10% of the population was distributed in 70% of the territory, while 90% were concentrated in only 30% of the geography.

Factors against: the “conservative” vote, the electoral law and the major parties

With, predictably, almost two years before a general election, it is difficult to predict whether this political project will meet its objectives or it will stay on the road. The political scientists consulted by RTVE.es see the moment as a great opportunity, but also take into account various risks and factors against. And the two agree that the best formula to concur each association with its brand separately, although later they converge, to “not lose the localism” with a state acronym.

See also  What are the new PCR test rules that were announced and when do I need to self-isolate?

The first challenge, Palomar says, is find “some very local candidates” and who “appeal to the disenchantment of the people”. Because it is hard, dice, “Break with the dichotomy” of bipartisanship in some provinces that distribute few seats that almost always tend to go to the PSOE and the PP. And it is that the electoral law (and the well-known D’hont system) penalizes those parties that are not the first in the provinces that distribute fewer seats, although their number of votes has been very high in them. It is the traditional burden, for example, that the United Left had, which despite receiving more votes than other nationalist parties in the general count, received many fewer seats due to the dispersion of the vote.

Hence the key is to concentrate the vote in these provinces with a campaign “very close to the people” and to the territory and with “tangible demands”, Castelló agrees. But he points out two factors against it: that small rural towns tend to have an aging population and a “very conservative” vote, in that they tend to always vote for the same party with a high “loyalty rate”.

In addition, it is the risk that national parties “appropriate” the discourse of emptied Spain and incorporate it into their respective campaigns, making them “shadow”. For this reason, he agrees with Palomar that the key is to have a very “local” discourse, which appeals to “disenchantment” but which is, above all, “positive” and put “realistic and serious” demands on the agenda of the ” serious problems ”they suffer.

Finally, time (approximately two years for general ones) can play both for and against: “They will have to lengthen the ‘momentum’ (and visibility) favorable they have now so that they do not forget about them, but it can be good if they continue to make noise to mobilize the territories and are demanding with the candidates they choose.

Whether successful or not, “it is interesting that participatory and political options appear that arise from the citizens and that they do so from a vision without partisan interests, but as a service to the community,” concludes Palomar.