The Provincial Electoral Board (JEP) of Barcelona has given 48 hours the Secretary General of the Parliament, Xavier Muro, to communicate which JxCat representative will replace President Quim Torra in the chamber after his suspension and has agreed to grant the act of deputy of former president Carles Puigdemont to Ferran Mascarell.

The electoral arbitrator has so decided in a resolution after the Supreme Court has refused to provisionally suspend the order of the Central Electoral Board (JEC) to withdraw the act of regional deputy from Torra.

The JEP gives Muro a period of two days to communicate who is the member of the JxCat candidacy that will replace Torra in the Parliament and advises that, of no response, will designate the candidate based on the list with which they participated in the 21D elections.

The provincial electoral body – which agrees to transfer said decisions to PP, Cs and Vox, who requested the disqualification of Torra – finally certifies that it has received the order of the Supreme Administrative Court with which the president’s request has been rejected to paralyze his suspension after conviction for disobedience.

After hearing the ruling, the Central Electoral Board has requested the President of Parliament, Roger Torrent, to “immediately” comply with your agreement and strip Torra of his status as a deputy.

The JEC has also urged Torrent to send him the documentation to “certify” the loss of the “status of deputy” of Torra in an agreement adopted after considering that his January decision is “fully executive” since the precautionary suspension he had requested “has been denied by the competent court”, that is, the Supreme Court.

See also  Commission to clarify crimes of the dirty war: The last chance for the truth in Mexico

The PSC asks the lawyers for a new report

The Parliamentary Board has until Monday to decide if it complies with the order of the Central Electoral Board (JEC) and withdraws the act of deputy to the president of the Generalitat, Quim Torra, or if on the contrary allows you to vote in plenary session that day. 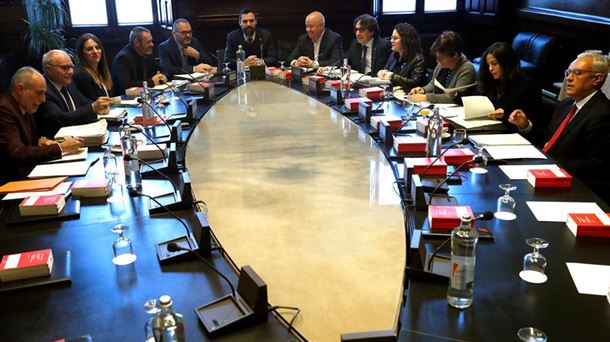 Meeting of the Bureau of Parliament, on January 14. Photo: EFE

Faced with the Supreme Court’s decision, the PSC has announced that it will request a new report from the parliament’s lawyers so that they can rule on whether a crime of disobedience is being incurred if Torra is allowed to vote. The legal services already said that the JEC was not a competent body.

Sources from the Presidency have indicated that it will be the Bureau when it meets who decides if this report is requested and other consulted parliamentary sources have considered a new document unnecessary because “the substance of the matter does not change” and, if the JEC was not competent then Nor is it now.

According to these sources, the decision to let Torra vote or not is “politics”, and falls to the Table, and its president, Roger Torrent. Thus, there could be three scenarios: that the order is complied with and the act of deputy to Torra is withdrawn, even though he maintains the position of president; that the act is not withdrawn and Torra can vote in the plenary session on Monday; and a third, which consists of obeying the order and withdrawing the act of deputy and the Presidency from Torra.

Torra affirms that he is still a deputy and president

For his part, and after learning of the Supreme Court’s decision, Quim Torra has insisted that he remains a deputy of the Parliament and president of the Generalitat: “We are not going to back down”.

In an institutional statement, Torra has also assured that “there is no change with respect to January 3 and the decision that the plenary session approved the next day.”

Torra was referring to his appearance on January 3, in which he expressed himself in the same terms when the JEC’s opinion was known, and to the plenary session that was held on 4 at the request of the president who ratified him as a deputy and head of the Executive Catalan.