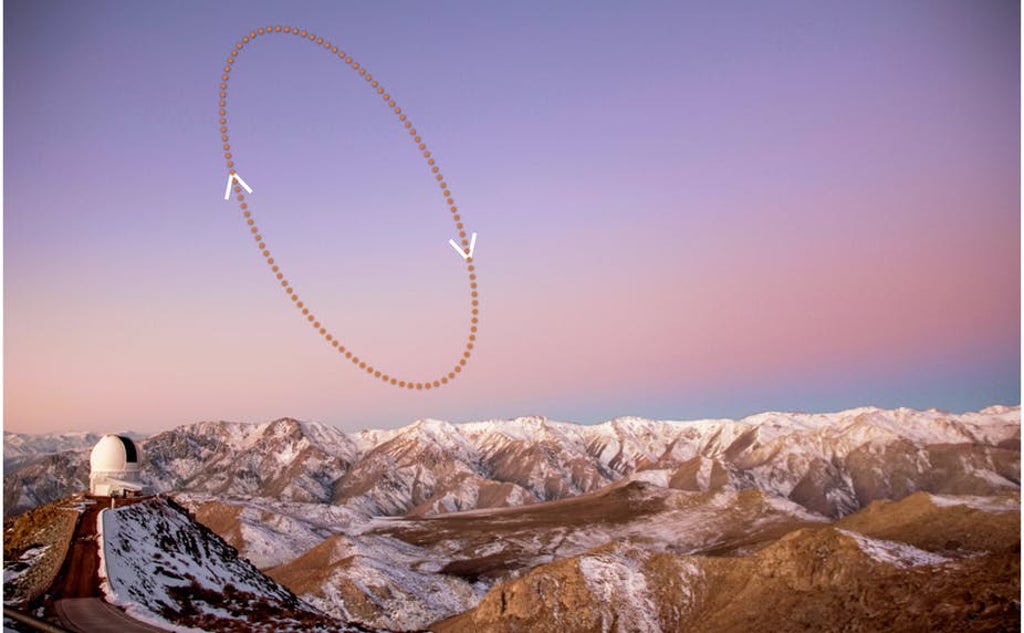 RThat arch has shown that the Earth trails an asteroid barely a kilometer across in its orbit about the sun – only the second such body to have ever been spotted. It goes round the sun on average two months ahead of the Earth, dancing around in front like an excited herald of our coming.

This object, known as 2020 XL5, was first spotted in December 2020 using Pan-STARRS telescopes on the summit of Haleakala on the Hawaiian island of Maui. But determination of its orbit required follow-up observations using the 4.1-metre Soar (Southern Astrophysical Research) telescope in Chile.

Based on this data, a team led by planetary scientist Toni Santana-Ros of the University of Alicante in Spain has now announced that 2020 XL5 is trapped for at least the next several thousand years in an orbit about one of the sun-Earth “Lagrange points”. These are where the gravitational forces of the Earth and the sun balance to create stable locations. It means the object keeps pace with the Earth as it goes round the sun.

Lagrange points exist around other planets too, they are equilibrium points for any objects with small mass under the influence of any two much more massive bodies. There are three such points on the sun-Earth line (L1, L2 and L3, see image below), first discovered mathematically by the Swiss mathematician Leonhard Euler. Spacecraft, such as James Webb Space Telecope (at L2) and DSCOVR (at L1), can be maintained there with only a small expenditure of fuel.

Two other points, L4 and L5, were discovered in 1772 by Euler’s student Joseph-Louis Lagrange. Here, a small-mass object making an equilateral triangle with sun and Earth is in a stable equilibrium. These points are 60 degrees ahead of and 60 degrees behind the Earth, and because 60 degrees (see image above) is one-sixth of the Earth’s orbit amounts this to two months separation.

If a small-mass object is perturbed so as to move away from L4 or L5, the combined gravity of the sun and Earth draws it back – bending its path into a stable orbit around the Lagrange point that looks kidney bean shaped relative to Earth.

XL5, but not fireball

2020 XL5 is being called a Trojan companion to the Earth by analogy with Jupiter’s Trojan asteroids. Jupiter shares its orbit with nearly 10,000 known asteroids, half of them ahead of Jupiter, and half behind. The first of those, discovered in 1906, was named Achilles after a central character at the siege of Troy in Homer’s Iliad.

A convention developed to name each one after a hero from the same story. Only those trailing Jupiter (clustered at the sun-Jupiter L5 position) are given Trojan names, such as Hektor, whereas those ahead of Jupiter (at L4) are given Greek names, such as Achilles. Collectively, whether at L4 or L5 they are all referred to as Trojans.

Small numbers of Trojan asteroids have now been discovered associated with Neptune (23), Uranus (1) and Mars (9). But 2020 XL5 is only the second Trojan companion of Earth to have been found. The first, 2010 TK7, was discovered in 2010. That’s only about 300 meters across, so 2020 XL5 considerably outmasses it at about 1.2km across.

There are probably many more Earth Trojans, but they are hard to discover from Earth because they can only ever be seen fairly low in the pre-dawn sky if at L4 like both 2010 TK7 and 2020 XL5, or just after sunset if at L5 ( where none have yet been found). Their orbits are not stable over millions of years, so they can’t be remnants that have been there ever since Earth’s formation but must have drifted into place later.

However, the SOAR observations were able to show that 2020 XL5 appears to be a carbon-rich asteroid (called C-type). So it is a sample of what the solar system was built from, and it would be instructive to study Earth’s Trojan companions in more detail as examples of unaltered material.

Could we mine them or use them in other ways? Toni Santana-Ros notes that 2020 XL5 has an orbit that bobs above and below Earth’s orbital plane. This means that to maneuver a spacecraft into a rendezvous (to orbit or land on it) would require considerable velocity change. That would probably need too much fuel to be practical. The same applies to 2010 TK7.

However, the study points out that if other Earth Trojans are found in orbits that are less tilted, these might make handy bases as staging posts for exploration of the solar system. They’d be much easier to take off than from the Earth or Moon because their gravity is so slight. They could even be a source of resources that we could mine.

David Rothery is a professor of planetary geosciences at the Open University. This article first appeared on The Conversation.