Skip to content
Home News The day of Hollande: new installment of the chronicles of Emmanuel Carrère since the trial for the attacks in Paris | Culture 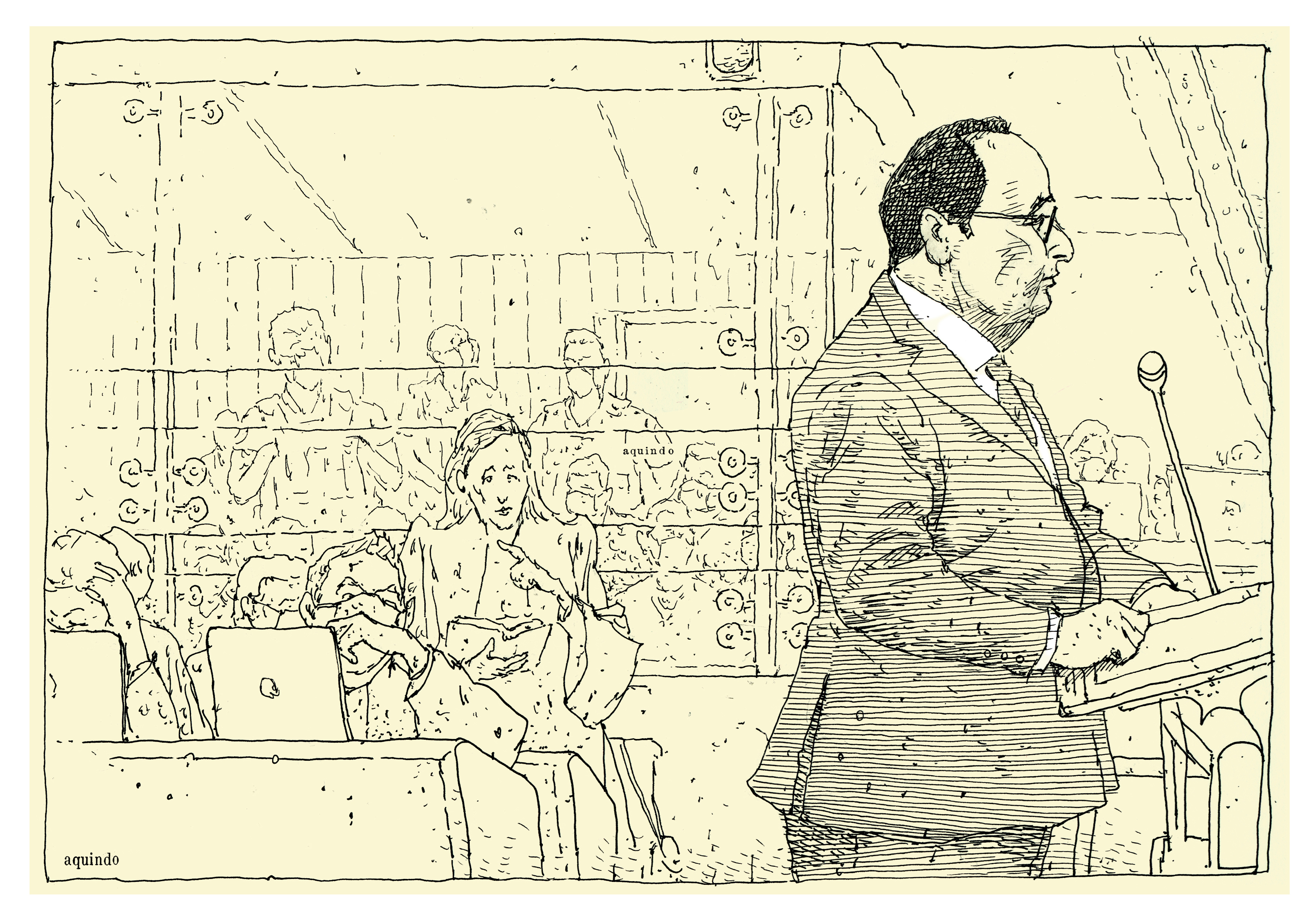 Great effervescence, last Wednesday: we received François Hollande. All the journalists-tourists who came the first day and left the second had returned and forced us to squeeze into the benches in which we had contracted habits. To warm up the room while we awaited the arrival of the star, there was a rare and small debate – rare because it was totally idle and at the same time of excellent quality – about whether the testimony of the former president was timely at the trial. What light could it provide on the facts, the personality of the accused or their morality, triple criteria required, I was informed on this occasion, by article 331 of the penal code? Since the status of civil parties had been denied to people who were within from the Stade de France, where nothing happened, why pay so much attention to Hollande, who was also inside and against whom, as far as we know, no one shot? Why this favoritism? Why was he President of the Republic? Obvious answer: yes, because it was. And it was him, specifically, that the terrorists alluded to. We hear them say, in the terrible Bataclan audio recording: “Thank your president Hollande”. If we kill you it is because of him, because it is he who started dropping bombs on our women and children. Despite this last cartridge used by the defense lawyers, who raised this non-existent problem, the sensible thing was to conclude as the public prosecutor did: the relevance of this testimony will be judged as soon as we have heard it. And besides, now that Hollande was around, we weren’t going to ask her to go home.

While we waited we made bets: will there be an incident in the audience? Will Salah Abdeslam leave his cabin, as he did at the beginning of the trial, as he has not done again afterwards? A lawyer friend had his own foresight: the moment Hollande approaches the bar, and before he even opens his mouth, Abdeslam stands up and, pointing his finger at him, shouts: “The accused is him! He is the one who should be on the bench! ” Let’s confess it: no matter how much we are in favor of serenity in the debates, we expected something similar. Nothing happened. Yes: a confused and in any case too late agitation of Abdeslam, to which the president of the court immediately cut off the word because between presidents they help each other. Hollande was dignified, articulate, a bit stiff but never renouncing humor: Hollande himself. Lawyers for the civil parties asked him respectful and mostly useless questions, and he briefly replied that if it happened again he would act in the same way.

The only one who tried anything was Olivia Ronen, Abdeslam’s attorney. I summarize your argument. The discourse of the terrorists is that the attacks are a legitimate reaction to the state terrorism practiced by France, first in Iraq and then in Syria: an eye for an eye and a tooth for a tooth, it was better not to start. The discourse of the State is not only that such a reaction would in any case be inadmissible, but also that the argument does not stand because the Islamic State threatened France before and not after of the first actions in Iraq. According to Hollande’s formula: so are – the land of freedom – not because of what we’ve done. Everybody seems to agree on this and yet that’s what Ronen contests: “Wait, Mr. President,” she says, “let’s take a closer look at the timeline. It was on September 21, 2014 when Mohamed al Adnani, IS spokesman, made a solemn call to punish the Western world and, especially, the “evil and dirty French». ¿And when were the first French attacks in Iraq? ” “Well,” replies Hollande, who sniffs the trap, “at the end of September …” (later, then). “No”, says Ronen, “on September 19” (before, therefore) “. France attacks IS two days before announcing that it is going to attack France. So Abdeslam is right from the strict chronology approach: it is we, France, who have declared war on the peaceful citizens of IS. It is a detail, we will immediately move on to another matter, but I thought Ronen was brave to point it out, with the few cartridges available, and I wondered if this detail, this pebble in Hollande’s shoe, was not also in some way a pebble in the way of a breach defense, as Jacques Vèrges theorized and scandalized it during the Barbie trial, exactly thirty-five years ago.

Friday the 13th often recalls Barbie’s trial. Both in Lyon then and in Paris today, the staging was great. They have transformed the lobby into a court capable of holding 700 people, they have raised the height of the praetorium, everything has been filmed. They have wanted to make this trial the process of Nazism, the Occupation, torture, an exemplary trial before history. With one caveat. The exception was that there was Vèrges, who used all his talent in making an argument in every way similar to the one that Ronne stammers: your justice is worth nothing. I don’t recognize her because the Gestapo tortured in France, okay, but France tortured in Algeria and no one thinks of trying her. So at the Barbie trial I will only talk about torture in Algeria. And don’t tell me this has nothing to do with it, because it’s not true. Get your own house in order.

It is the title of the formidable documentary that Barbet Schroeder dedicated to Vèrges, a fictional character who began as a courageous anti-colonialist fighter before becoming, from the Palestinian cause, the defender of all the terrorists of the 1970s, of some bloodthirsty dictators -but Marxists- and, the culmination of his career, of a Nazi executioner. Crouched in the golden gloom of his office, in front of his Khmer statuettes — possibly given by Pol Pot — he has the smile of the Cheshire cat, the mellifluous, sardonic voice: an ideal villain for James Bond.

Barbet Schroeder asks him what memory he has of Barbie’s trial. Exhilarated by the question, he savors the adjective in his mouth before blurting it out: “Euphoric!” Then he takes a drag on his cigar, delighted with himself, and continues: “There were thirty-nine lawyers for civil parties and I was alone. Which means that each one was only worth a fortieth of me. I remember that, before the trial, Roland Dumas told me that a resistance association was going to hire him. “How about?” I replied: I am not afraid of you, but I advise against it. You are going to be forty guys repeating the same thing and pretending the same simulated emotion: human dignity … the duty of memory … never ever this … The first three, if they are good actors, will have a small success, but from the fourth they will say: Enough! Enough! Dumas agreed, anyway, but I ask: can you tell me the name of just one of those tenors in front of me? A trial is a magical place, a box of surprises. “Never again this”: we have heard it said a hundred times, with tremulous voices, but in reality they said to themselves: What else is this bastard from Vèrges going to invent today? … This amuses me, excites me, but that is not all. I can’t stand a man being humiliated. I cannot bear that a single man, even if he is the last of the scoundrels, is insulted by a multitude of lynchmen. One day someone asked me: Would you have defended Hitler? Again, the cat smile. “I replied: I would even defend Bush.”