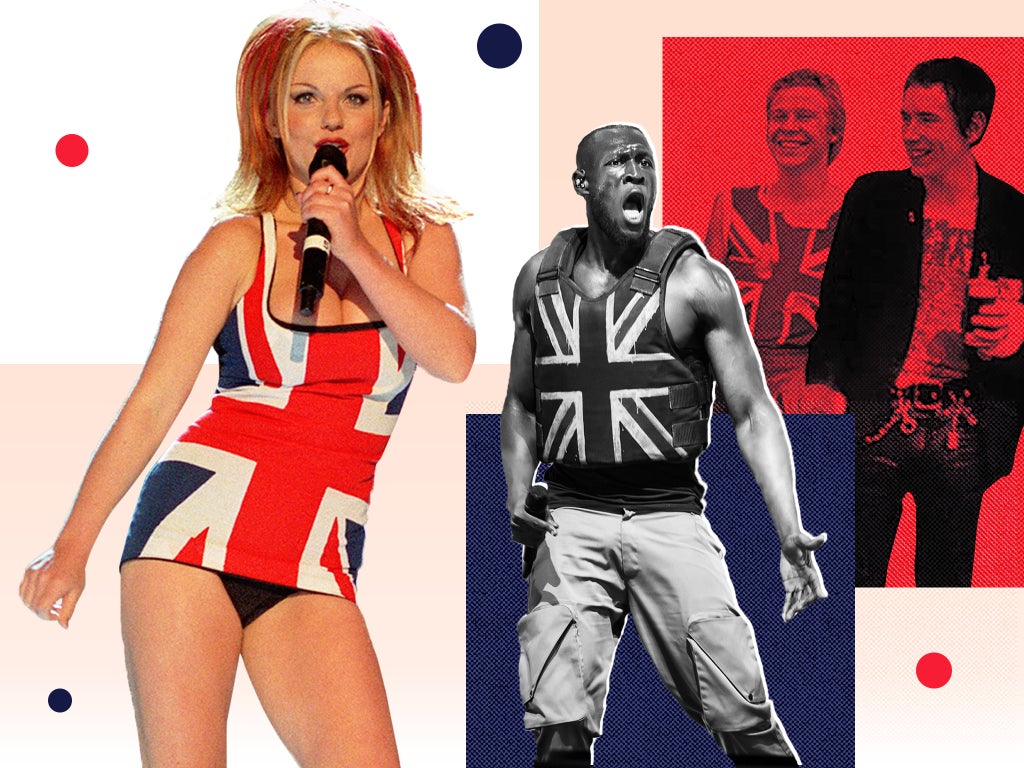 FFebruary 24th, 1997. Picture the scene. You’re a suburban tween, lying on the (patterned) carpet in front of the (analogue) TV. Hairbrush microphone in hand, Chupa-Chup in mouth, blinking through a cloud of vanilla body spray. It’s BRIT Awards night, and you’re about to have your mind blown.

Even if you weren’t watching that night – heck, even if you weren’t born yet – there’s a high chance the same visual will spring to mind. It’s the one that was plastered across the front pages the next morning; capturing a moment, a mood, an attitude. And a dress. Girl power had pinned its colors to the mast, and they were red, white and blue.

In the seven months since their debut single, “Wannabe”, was released, the Spice Girls had gone viral the old-fashioned way: through TV screens, magazines and playground dance routines; through an avalanche of branded merch and a barrage of sassy soundbites. They’d already sold six million albums, hit number one in 31 countries, smashed numerous records and broken America with a force not seen from a British export since Beatlemania (platform boots will help with that).

Taking home British Single of the Year and British Video of the Year, and with more nominations than any other band or artist, it’s fair to say the ’97 BRITs crowned Ginger, Scary, Baby, Sporty and Posh as a staggering musical success story – although not everyone was prepared to bow down to the new queens of pop. Mel C used the podium to goad the Gallagher brother who was absent in protest at their nominations. “Liam, come and have a go if you think you’re hard enough.”

But it’s the dress that everyone remembers, and the dress that ended up as a kind of sartorial shorthand for years to come. It joined the elite list, alongside Bowie’s Ziggy Stardust hair and Elvis’s Vegas jumpsuit, of pop looks so iconic that even the very worst fancy dress efforts are instantly recognizable. It’s the dress that launched a thousand drag acts and school talent show routines, the dress that was copied and flogged on market stalls across the land, and the dress that has just been rendered in plastic for the brand new Spice Girls LEGO set. Minus the visible crotch.

If the medium is the message, then the Spice Girls’ wardrobe – sexy, sure, but also winkingly playful, camp, often verging on the cartoonish – was always a part of their feminism. Skimpy hemlines and Wonderbras were counterbalanced by tracksuit bottoms and clodhopping boots; every concession to the cis-het male gaze subverted by mouthy sloganeering. Girls rule, boys drool. And the Union Jack dress ticked both boxes.

Its origin story is now pop culture lore. The dress that would go on to hold the record for the most expensive item of popstar clothing sold at auction was made from a tea towel, sewn to a #gifted Gucci LBD. When the fashion house declined to make the alteration, Geri’s sister did it instead.

To call Ginger Spice a sustainable fashion icon before her time is probably a stretch. But to their fans, that slapdash, DIY aesthetic was a big part of the group’s appeal. Just like their endearingly basic dance routines and shambolic interview style, the Spices’ wardrobe made up for in confidence what they lacked in polish – and we loved them for it. No matter how famous they got or how many branded products they shilled (more than 100 were trademarked in the year since their first release), there was still the sense that all we needed to join the gang was courage and a bag full of craft supplies . Even Geri’s platform boots were sprayed red with car paint from her father’s garage.

But while we might look back and applaud the upcycling efforts, it’s fair to say the flag looks pretty different through contemporary eyes.

What was going on in 1997 was a vibe shift. A new “British invasion” – culturally, at least – that harked back to the swinging ’60s while looking forward to a brighter future. Tony Blair was two months away from his New Labor landslide and surrounded by a kind of energy and optimism it’s hard to fathom in UK politics today. “The first prime minister,” Bridget Jones wrote in her diary, “I can completely imagine having voluntary sex with.”

Geri may have ruffled feathers by calling Margaret Thatcher “the first Spice Girl” (she backpedled on that a few months later, and by 2001 appeared in a Labor election broadcast), but she wasn’t the only celebrity flying the flag. The same year she saw Kate Moss and Naomi Campbell don Union Jacks at London Fashion Week, while Liam Gallagher and Patsy Kensit reclined on a Union Jack duvet cover on the cover of Vanity Fair. “London swings! Again!” read the headline.

“The Union Jack – which I believe has always been a violent symbol – was arguably at its least toxic in terms of what it represented in the 1960s and the 1990s,” says fashion historian, author and broadcaster Amber Butchart. “The New Labor victory ushered in an era of increased public investment in creativity, as well as funding from initiatives like the recent National Lottery. Culture and creativity were given a prominent place in political discussions, and New Labor policy advocated for wider access to the arts. We could not be further from that now.”

But even back then, the Union Jack was far from a benign choice for Geri. “I’ve always tried to put my finger to the wind and feel what’s going on right now,” Horner (neé Halliwell) told fashion in 2020. When it came to the Union Jack dress, she recalls a stylist telling her: “you can’t wear that, it’s racist. It’s National Front.”

The British flag had already been a symbol of the far right for decades by this point, having been taken up in the 1970s by skinheads and neo-Nazis as a twisted display of toxic nationalism. It adorned racist placards and flew over anti-immigration marches. But it was also subject to tussles across the political spectrum; subverted by punks, beloved by mod revivalists – and, some argued, ripe for a positive claim.

“I think something can be two things at once, and that Cool Britannia can also be colonialism. Both make up what Britain is,” says Amma Aburam, fashion writer and host of the Style and Sustain podcast.

Now a Londoner, Aburam grew up in Ghana and in France. “As a Spice Girls fan, I loved that Ginger Spice made the bold choice to wear something that meant a lot to her, that defied the expectations of the people she was working with at that time. She truly embodied girl power in that moment. However, let’s get specific: the truth is she embodied white, British girl power in that moment.”

“She may have been too young to fully recognize the symbolism of the Union Jack… but that flag carries with it all of British history, which also includes colonialism,” Aburam adds. “These things are never black and white.”

Geri’s solution was to diffuse any negative connotations by emblazoning the back of the dress with a peace sign. “We celebrate all cultures,” she insisted. Although the cheeky nod to the CND logo hits differently knowing that Blair would lead us into Iraq a few years later.

Now, a quarter of a century on, in a post-Brexit Britain steeped in Tory sleaze and royal scandal, the Union Jack is making headlines once more. When the Department for Digital, Culture, Media and Sport released new guidance last year stating that the flag should be flown every day from all government buildings, it inspired a slew of bitter commentary from each side of the culture war. Not rousing choruses of “Hey Jude.”

Except for the odd moment of unity – the Olympics, Eurovision, whenever Word uses an American spelling – it’s hard to see why anyone without jingoistic leanings would choose to wear the British flag across their chest in 2022. A 2017 study across 11 countries by Queen’s University Belfast found that while national flags can inspire vastly different feelings depending on a country’s history, from egalitarianism to obedience to aggression, “the British flag still has associations with a sense of past imperial greatness.”

But virtually every other trend from the 90s and 00s has been resurrected, so is it possible we could see Union Jacks as the new tie dye/polka dots/florals for spring?

Butchart believes that ship has sailed. “If that ever could have been possible – and I would argue it couldn’t, the context of the British Empire is simply impossible to ignore – then it is absolutely not possible now,” she says. “So many of these discussions, whether it’s about flags or public monuments, are essentially anti-history. It’s about writing a biased national narrative, rather than actually critically engaging with the past.”

But beyond this little island, patriotic style can still be a powerful tool. It can help forge a sense of identity in diasporic communities, and champion under-represented cultures on the world stage. We might look to DJ Tara Kumar mixing sarees with vintage streetwear, or sustainable labels like Kemi Telford, which makes contemporary pieces in traditional Nigerian wax fabrics. “I use colorful and happy prints that most Nigerians wear to recreate happiness,” founder Yvonne tells me.

“As a Ghanaian woman, I love our traditional wear. Clothes like Kente or Fubu are real symbolism of my cultural heritage that I adore,” agrees Aburam. “I hope for a future fashion industry where we can share each other’s heritage through clothes without unjustly appropriating or making others feel excluded, but rather through appreciation and giving credit where it is due.”

Right now a “Made in Britain” label is no guarantee of great ethics. But from Welsh tapestry to Harris tweed, Yorkshire knitwear and countless innovative new designers, these isles have a rich fashion history. Who knows – by regulating and rejuvenating the UK textile industry, perhaps we could find a better way to dress patriotically?

Meanwhile recycled and DIY efforts are slowly turning up on more red carpets. And even the humble tea towel has been given a chic new spin by designer Selina Sanders, whose beautiful upcycled tops sell for hundreds of dollars via Instagram drops. Repurposed fabrics like quilts and crochet blankets are hot property in the world of fashion, making their own kind of political statement: one that flies the flag not for a country, but for the planet as a whole. Because when it comes to climate change, nobody wins unless we work together.

As for Geri, she’s undergone something of, um, a cultural shift herself over the past 25 years, from outspoken pop rebel to self-styled lady of the manor, frequently seen in tweeds and pearls. For the Spice Girls’ 2008 reunion, the tea towel dress was reimagined in Swarovski crystals by Roberto Cavalli. For 2019’s stadium tour, she added a coat of arms and a crown.

In some ways the Spice Girls will always be a problematic fave. And after a tumultuous 25 years, it will take a long time to answer the question of who, as a nation, we think we are. But while 90s nostalgia is still on the fashion menu, my generation will be looking back, feeling ancient, and remembering how momentous it felt to watch Geri and the gang swing it, shake it, move it and prove that a girl’s place wasn’t in the kitchen. She was wearing it.