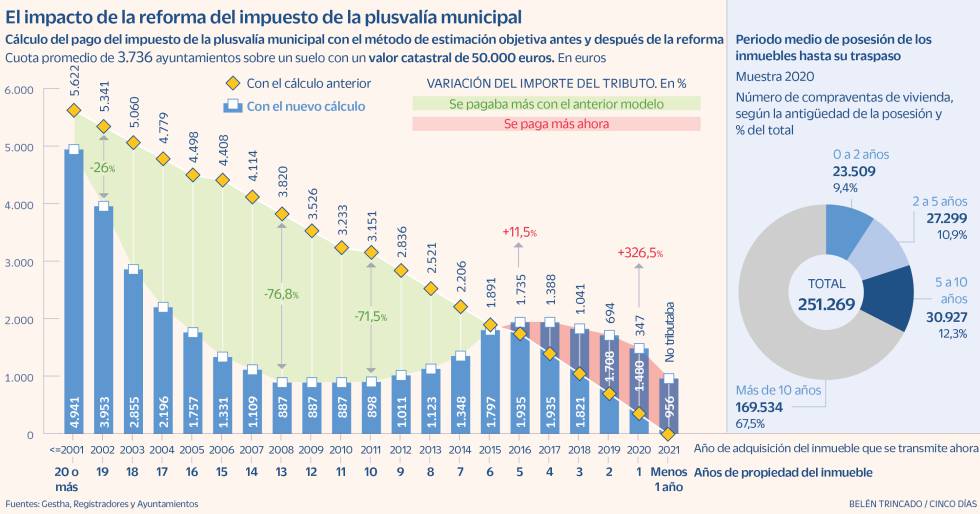 The reform of the so-called municipal capital gains tax approved by the Government to circumvent the nullity of its calculation model, decreed by the Constitutional Court, represents an authentic revolution in tribute, which begins to strongly penalize the gains obtained from the transfer of real estate short-term in order to discourage speculative operations. Although the total collection of the tribute promises to decrease, and the tax on the sale of land purchased at least six years ago becomes cheaper by up to 77%, the taxation for the capital gain obtained from the sale of an apartment bought in the last two years arrives to skyrocket 325% compared to the old calculation method.

This is derived at least from the simulations handled by the association of technicians of the Ministry of Finance (Gestha), to which this newspaper has had access, comparing the effects of the objective estimation method of the Tax on the Increase in Value of Land in Urban Nature (IIVTNU), as it is officially called, before and after the reform.

Until now, the tax rate was estimated by applying a maximum rate of 30% to a taxable base that was the result of multiplying the cadastral value of the land by the number of years that had elapsed since its acquisition and a coefficient that varies according to said term. After being declared unconstitutional, the Government revised the formula by reissuing the calculation as the multiplication of the cadastral value of the land by a series of coefficients that vary depending on the years the property has been owned (from 0.08% to 0, 45%) to adapt to the behavior of the housing market in said period and which will be updated every year.

The standard also introduces an alternative method of estimating the tax base based on applying the rate to the real capital gain, obtained as the difference between the sale price and the acquisition price. Although this new model is generally cheaper for the taxpayer than the old one and the old one, only the effects of the reform of the traditional method already show significant variations.

Thus, the Ministry of Finance technicians have focused their simulations on the effect of modifying the objective calculation method applied by the 3,736 municipalities that collect this optional tax (46% of the total). The starting example is that of an urban property on land with a cadastral value of 50,000 euros. The result is that the fees fluctuate strongly depending on the time elapsed from the initial acquisition of the property to its sale, or receipt as an inheritance or donation.

To begin with, the new model taxes for the first time the capital gains obtained with the transfer of the land in less than a year, which in the example cited would yield a fee of 956 euros, which would have previously been paid free of charge. From there, the capital gain reform implies tax surcharges compared to the previous system of between 201 and 1,130 euros when the transfer is sealed in a period of less than five years from the purchase. The lien reaches four times the old in the event that the property is transferred in less than two years, when it goes from 347 to 1,480 euros for the example of the land of 50,000 euros. It so happens that those who buy a property in 2020 will pay the first figure if they sold it in September, for example, and the second, 326.5% more, if they do so now. Such a jump is explained by the declared intention of the Treasury to penalize the most speculative operations.

For acquisitions more remote in time, from 16 years old, the new taxation tends to converge with the old one, although it is still somewhat more favorable for the taxpayer (with reductions from 681 to 2,741 euros, depending on the year of the purchase).

Although the percentage rate differences are more striking in the penalty applied to short-term operations, compared to the discounts obtained for the sales of properties bought more than six years ago, the overall result promises to show a decrease in income for the municipalities. This is so because, on average, the bulk of transactions, 67% of the total, are carried out with properties acquired more than 10 years ago. On the contrary, according to the operations of 2020, the transfers that occur in less than two years from the purchase are only 9.4%, with 10.9% those that are made after two to five years and 12 , 3% those that close between five and 10 years from the acquisition.