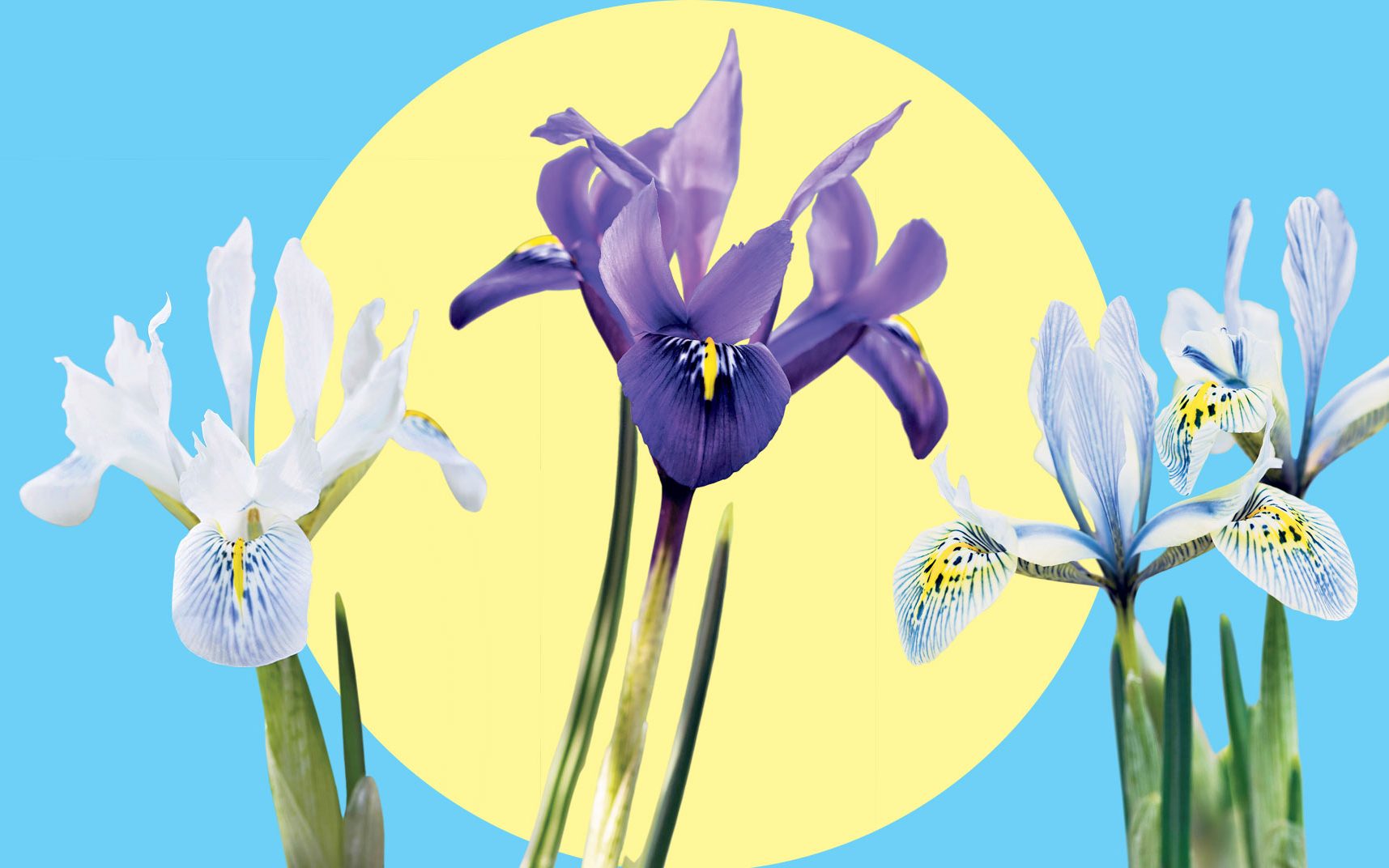 A RHS trial held at Hyde Hall 2018-2020 assessed 91 entries. The trial had to weather 2018’s Beast from the East and the ravages of Hyde Hall’s squirrels. Five irises on the trial were given the RHS Award of Garden Merit (AGM) for garden worthiness and, after a discussion, I. winogradowi was also awarded an AGM, although it wasn’t in the trial. A yellow-flowered species, found in moist alpine meadows of the Caucasus, I. winogradowi was recommended as the best reticulate iris for Scottish conditions. It grows well in gardens and bulks up as long as the bulbs don’t dry out in autumn. I’m planting it in that well-known gardening oxymoron – soil that is moist but well-drained!

‘George’ had its previous AGM rescinded, because all stocks appear to have a virus. That’s one to avoid.

There were three very similar grey-blues, with heavily marked flowers. These flowers can vary from year to year, and there had been a suspicion that these differences in color and shape were being caused by a virus. However, ‘Katherine Hodgkin’, ‘Frank Elder’ and ‘Sheila Ann Germaney’ were all found to be virus-free. The aberrations within the flowers are caused by mutations. ‘Katherine Hodgkin’ is the most vigorous grower, and nurseryman John Amand acquired six bulbs from the late Kath Dryden in the early 1980s and took them to Holland. There are now acres of them in production, from those six bulbs.

Modern thinking attributes all three of the grey-blues to crosses between I. histrioides and I. winogradowii. However EB Anderson, who raised and named ‘Katherine Hodgkin’, records (in Seven Gardens or Sixty Years of Gardening) that he used I. histrioides ‘Major’ and a Turkish yellow snow-melt miniature named I. danfordiae. The latter is notoriously difficult to grow in British gardens, because the bulbs fragment into tiny divisions, so it’s best replanted annually. The commercial form of I. danfordiae is triploid, so the yellow flowers bear little or no viable pollen, and this has hampered attempts to breed more yellow-flowered miniature irises.

A Canadian bulb enthusiast, Alan McMurtrie, discovered a fertile diploid form of I. danfordiae near Darbogaz in Turkey in 1985. His aim is to produce better yellows, but it’s a slow process. Each generation takes five years to flower. Any promising seedlings are then trialled in the Netherlands and, if suitable, there’s another 12-year wait because it’s not commercially viable to launch a new bulb unless there are 100,000 bulbs to sell.

There was great excitement when a selection of McMurtrie irises were exhibited at an RHS London show in March 2015, on Jacques Amand’s exhibit. This nursery sells the best range. However, the trials panel considered it too early to award AGMs to any of McMurtrie’s irises.

However, several are flourishing at RHS Hyde Hall in the dry county of Essex and they include ‘Mars Landing’ (a reddish brown marked in yellow) and ‘North Star’ (a pallid-yellow with a brighter yellow color wash). I have grown several in pots and the most enduring here is ‘Eyecatcher’, with pale flowers marked in blue and yellow. These always appear before Christmas (although I’d prefer them to grace spring rather than midwinter).

I have also grown McMurtrie’s ‘Scent Sation’ and ‘Spot On’ in pots. More are on their way, but their Canadian provenance makes me wonder if they will all flower precociously early in the warmer UK climate. If they do, they will still make great additions to the garden.

The best miniature irises to plant