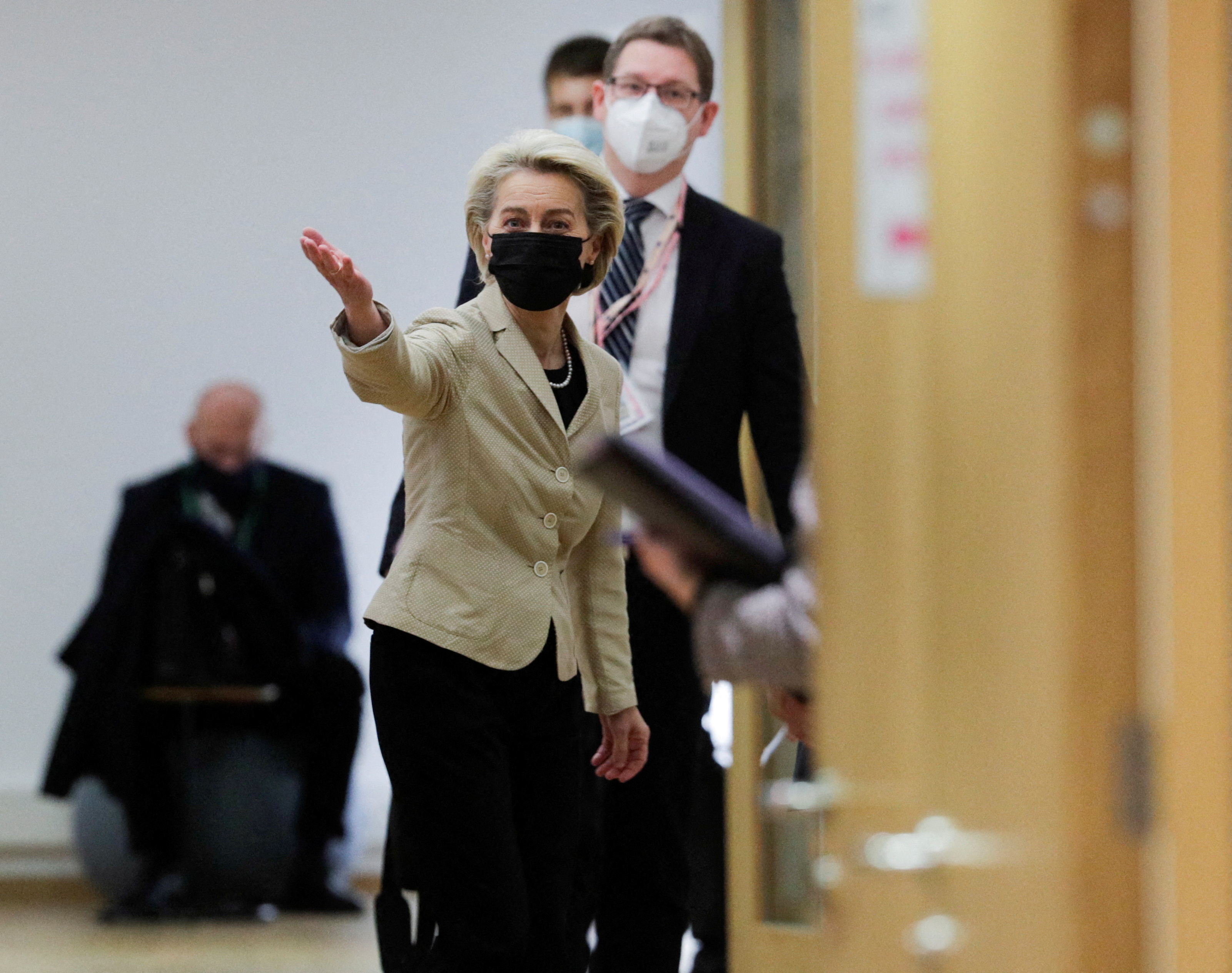 The last European summit of 2021, held this Thursday in Brussels, has been dominated by the three main issues on the EU agenda this year: the endless fight with the covid-19 virus, the vertiginous rise in electricity prices and the explosive geostrategic game with a Russian president willing to touch up the national borders of the Old Continent. The 27 have managed to agree a common position on the scourge of the pandemic and close ranks in the face of Vladimir Putin’s threats against Ukraine. But the energy crisis, with its tremendous impact on public opinion in several countries, causes deep fissures within the club, with Spain among the most angry voices against the apparent passivity of Brussels.

Pedro Sánchez has come to the community capital with the intention of making it clear that he does not see enough of the energy package adopted by the European Commission this week, which among other things proposes the creation of strategic gas reserves and the possibility that the Member States can to benefit from a voluntary scheme for the joint purchase of fuel aimed at these reserves – a measure that was born out of a Spanish proposal in September. Spain, according to sources from La Moncloa, has wanted to focus the energy discussion on whether the EU is doing what is necessary and quickly enough. And it has pushed to start, in the text of the Council’s conclusions, concrete commitments, such as the ability to react early to curb high volatilities in energy prices or open the door to a future remodeling of the pricing model that it may have. taking into account the greater presence of renewable energies. The Spanish Government has reached the summit with the endorsement of a position paper, prepared a few weeks ago, which is also supported by France, Italy, Slovenia and Romania, countries that account for 45% of the European population.

Other states believe that the debate is over and hide behind the recent report by the EU Agency for the Cooperation of Energy Regulators (ACER), commissioned by the Commission, which considered some of the Spanish proposals counterproductive. The bloc of countries reluctant to change (Germany, Austria, Denmark and Finland) defends the current electricity market and blames the price crisis on the “world economic recovery”. They are confident of a drop in prices starting in the spring, but that consensus is beginning to collide with an inflationary situation that is longer and more powerful than expected.

Opening the energy debate in Brussels has a price: you know where it begins, but never where it ends, because once the thunder box is opened, the different national sensibilities come out. Poland, for example, which claims to act against the speculation of the CO2 emissions trading regime and has been uniting around it a growing group of countries, among them Viktor Orbán’s Hungary; or France, which asks that investments in nuclear energy be recognized as green in the so-called taxonomy, a classification that the Commission will foreseeably approve next week and that will distinguish what is a green bond and what is not, with the aim of remotely directing finances towards the ecological transition undertaken by the EU. And to which several countries such as Germany and Austria resist.

Joint purchases, in any case, are seen favorably by La Moncloa. The regulation proposal is extensive and will still take months, if not years, to be adopted. “The details remain to be seen, but the melody sounds good,” say government sources.

The negotiation on energy prices started in Brussels around two in the afternoon, after a long debate on the covid, and has had to be abandoned on several occasions, to take steps to other matters of considerable weight, such as sanctions. to Russia, and then return to the same. Around eight o’clock in the afternoon, diplomatic sources acknowledged that things were going for a long time.

Somehow many of the debates at the summit led to the same place: Russia. From the migration that enters through Belarus, to gas (Russia is the main supplier of the EU, about 40%) passing, of course, through Ukraine.

The EU wanted to shield its position before Moscow with a red and clear line: the invasion of Ukraine would entail sanctions of unseen harshness. The Council’s conclusions are a warning to Vladimir Putin: “Any new military aggression against Ukraine will have enormous consequences.” The ultimate goal, once the war conflict has arrived, would be to isolate Russia economically. Brussels is still confident that Putin will agree to negotiate a de-escalation. But as the EU’s High Representative for Foreign Policy, Josep Borrell, has stated, “we hope for the best, but we prepare for the worst”.

This tense situation is the protagonist of a European Council in which the EU wants to underline two ideas: on the one hand, it invokes de-escalation and diplomatic channels to defuse the geopolitical time bomb at the Union’s gates; on the other, it threatens with a battery of sanctions and punitive measures that exhaust adjectives in diplomatic forums – “forceful”, “severe”, “serious”, “resounding” -. The European Commission has spent months preparing this package of options, but its contents are kept under lock and key.

See also  Sergi Bellver: The man who has no home and wrote his first novel in Vienna, Prague or Marrakech | The weekly country

In line with the conclusions, at the entrance of the Heads of State and Government to the European Council they followed this script. “We must once again emphasize the inviolability of the borders and that we will do everything together to ensure that this inviolability is maintained,” stressed the German Chancellor, Olaf Scholz, who has supported the decision of his Foreign Minister, Annalena Baerbock, to expel to various members of the Russian Embassy in Germany.

Precisely the new German president makes his debut at this summit and his every gesture is carefully scrutinized, as Brussels has become a hotbed of uncertainty eager to know the content of this package. Similar messages have been launched by the Finnish Prime Minister, Sanna Marin, and the Polish, Mateusz Morawiecki, who has indicated that it had to be clear that he was optimistic about the possibility of “reaching common conclusions that will announce a response if there is a military aggression against Ukraine”. The president of the Spanish Government, Pedro Sánchez, on the other hand, has hardly stopped on the matter. He has only mentioned that he was on the agenda for a day that he anticipates to be “very long.”

The leaders of the Twenty-seven have given the go-ahead for the COVID certificate to expire after nine months if a booster dose is not received, as proposed by the European Commission three weeks ago. The measure, which will now have to be drafted by the Community Executive through a delegated act – a technical decision that could come next week, according to government sources, although it would come into force next year – seeks to give a boost to the inoculation of the booster doses in the European population, as the infections of the new omicron variant progress.

This, translated into diplomatic language, means that the leaders have negotiated the inclusion of a phrase in the conclusions of the European Council that refers to how the epidemiological situation suffers a “deterioration” linked to the new variant, thus underlining “the importance of a coordinated approach on the validity of the EU Covid Digital vaccination certificate ”, and“ it is noted that the Commission will adopt a delegated act on this matter ”, the agreed text states, adding:“ The deployment of the vaccination of all and the deployment of booster doses are crucial and urgent ”.

See also  Millions of Brits dream of French lifestyle thanks to bakeries, landmarks – and cheese

The president of the European Commission, Ursula von der Leyen, explained during the meeting the current situation of the pandemic, where the panorama is very different according to European latitude: it is 82% of the vaccinated population in Denmark (and slightly more than 15 % with the third dose) to 26.2% of those immunized in Bulgaria (with rates close to zero in terms of booster doses), according to figures from the Community Executive. Spain is above 74% of vaccinated and 10% of citizens with the memory. But nine members have vaccinated with two doses below 60%, while the European average stands at 67.2%, according to data from the European Center for Disease Control and Prevention (ECDC).

With the arrival of winter just around the corner, fear grows in Europe about the danger that the new wave of contagions will slow down the economy again and impose a drag on an engine that was beginning to gain momentum, with the GDP of the Eurozone recovering the level prior to the pandemic. Fears are also growing that unilateral and uncoordinated movements within the EU will return, after several countries, such as Greece, Portugal and Italy, have introduced the requirement of a negative PCR for intra-community travelers, whether or not they are vaccinated.

The unilateral measures have been part of a heated debate that has spread throughout the morning, with several countries defending the need for these measures to avoid having to confine people to their homes, according to diplomatic sources. Spain, and other community partners, such as Belgium, have instead affected the risks of uncoordination, according to sources from La Moncloa.

But the reality is that neither the Commission nor the Council frowns upon some countries deciding to break unity and impose restrictive measures in extraordinary cases. The agreed conclusions leave sufficient margin for States to freely decide what to do on their borders, but asks them to guarantee that any restriction is based “on objective criteria” and that “it does not undermine the functioning of the single market or disproportionately impede the free circulation between member states ”.