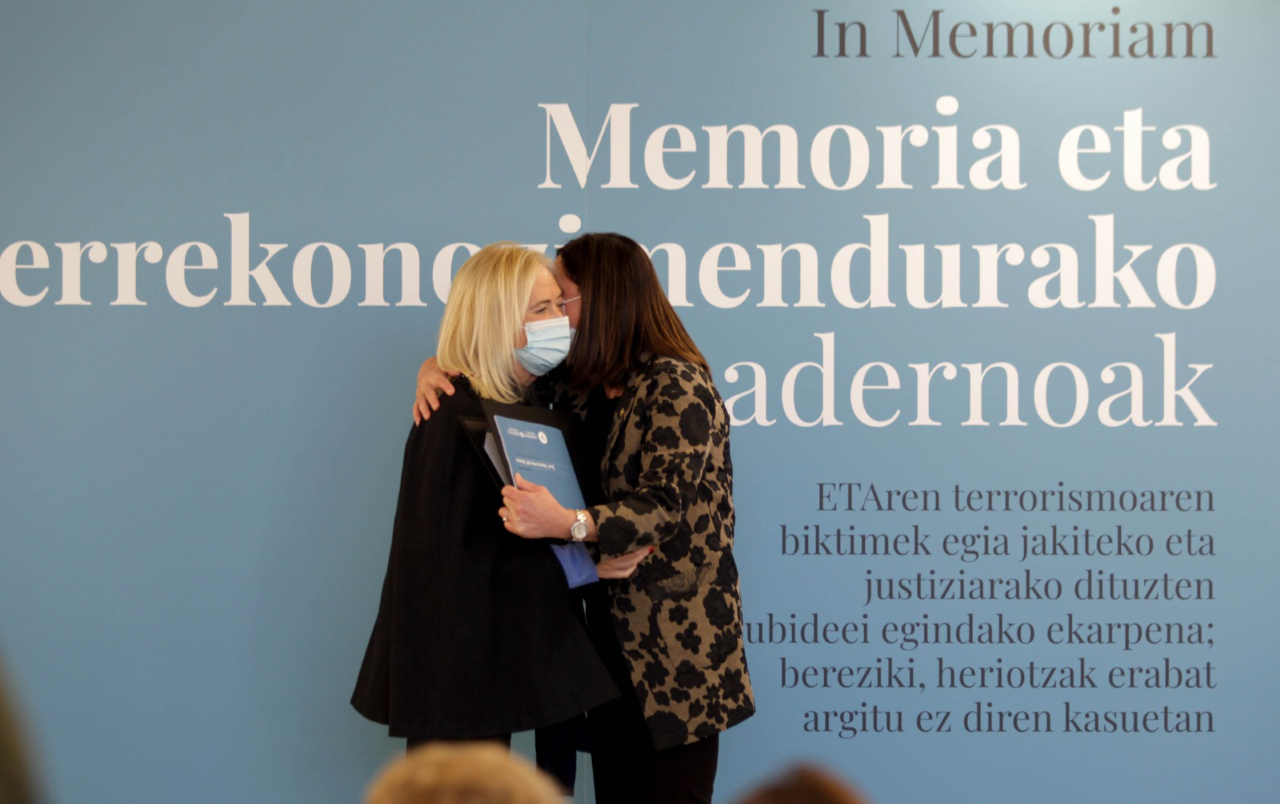 The Basque Government has staged this Friday its commitment “to the right to the truth” that assists the victims of ETA attacks that remain unclear. “We cannot give you back your life, but we can restore your dignity,” Beatriz Artolazabal, the Minister of Equality, Justice and Social Policies, has transmitted to the families of those killed by the terrorist gang between 1968 and 1979, whose crimes have yet to be solved. . Relatives of 86 murdered by ETA have received this Friday the notebooks of memory and recognition, which collect the information available on these murders and a document signed by the Lehendakari, Iñigo Urkullu, in which he “solemnly” expresses the institutional support of the Government to those close to you. This tribute follows the roadmap set by the Urkullu cabinet in favor of coexistence in the Basque Country.

The act took place just two weeks after the Basque Political Prisoners Collective (EPPK) resigned in a public statement to the public reception when they were released from jail. A statement in which they also slipped that they were not going to collaborate with the Justice to clarify the more than 300 murders without known authorship. Minister Artolazabal asked them a few days later to reconsider that decision not to help clarify them.

“You are not anonymous beings, concepts and entelequies that ETA wanted to erase from the face of this country. You are people of flesh and blood. You were unjustly murdered, ”Artolazabal proclaimed at the event attended by relatives of a score of the 86 victims, as well as the Deputy Minister for Human Rights, José Antonio Rodríguez Ranz, and the president of the Association of Victims of Terrorism (AVT) , María Teresa Araluce, among others. At the beginning of last November, a delegation from the Petitions Committee of the European Parliament went to Vitoria to study the circumstances in which the unresolved murders have taken place and draw up a report with its conclusions. “The unsolved murders of ETA are a pending issue for Spanish democracy,” said then the MEP of Ciudadanos Maite Pagazaurtundua.

Although the notebooks only incorporate the public data of each of the murders of the gang without known responsibility and not resolved by the courts, since the Basque Government does not have access to the judicial files, the Lehendakari has expressed the commitment of his Executive to the advancement and consolidation of the policies of recognition and reparation for the victims of terrorism. “It is about solemnizing an ethical and humane recognition” to the victims, he said in the morning in Parliament.

The memory notebooks have been prepared by the Government in collaboration with the AVT. Of the 86 people murdered whose family members have been awarded the notebooks – in reality they have been handed over to a representation made up of about twenty victims – 39 were from Bizkaia, 38 from Gipuzkoa and 9 from Álava. The Executive is already working on another hundred similar crimes. These documents, as highlighted by the Lehendakari, include “an express recognition of injustice and nonsense” of the violence suffered by the people to whom each of the notebooks refers. Each one of them collects in a dossier who the victims of ETA terrorism between 1968 and 1979 were, how they lived and how they died, as well as various graphic material provided by relatives with the help of AVT. And it has attached an official accreditation of the regional Executive in which the injustice and the senselessness of the suffering suffered by the victims is expressly recognized. The text signed by Urkullu concludes in this way: “Maintaining his memory helps to prevent something similar from happening again.”

The dossiers of the memory are, said the counselor Artolazabal, “a contribution to the right to the truth” of the victims in unresolved or incomplete clarification cases. “You deserve a truth with capital letters, without adjectives,” he told them. With this gesture, the Executive intends to “keep alive” the memory of these murdered, accompany their families and reaffirm its “firm commitment to the victims of terrorism.” Artolazabal added: “We want to remember you for what you were: waiters, justices of the peace, commercials, civil guards, national police, municipal police, taxi drivers, journalists …”.

The Basque Government commissioned a report on terrorist attacks that were not clarified, the results of which were known in 2014 and in which a total of 849 people were counted killed by the terrorist gang, of which 197 deaths (23.20%) were unresolved for being dismissed or filed by justice. The figure reaches 377 murders, according to the accounts of the Dignity and Justice association. The Office of the Prosecutor and the Association of Victims of Terrorism reduce it slightly to 314, because they discount those committed before the Amnesty Law between 1969 and 1976.

Artolazabal has remarked that these notebooks intend to “make the memory eternal” of the deceased. And he has offered “accompaniment, affection and closeness” to the families, because he has admitted that during these years they have not been able to convey “affection”: “We believe that it is a duty to recognize it like this”, concluded the counselor, who has also had words also of appreciation to the AVT for its involvement in this initiative.

Minutes before the act began, a minute of silence was observed in memory of all the victims and it was recalled that on December 17, Luis Santos Hernández and Argimiro García Estévez were assassinated by ETA in 1974; and Diego Fernández-Montes, in 1978. The ceremony had the testimonies of the families of Argimiro García Estévez, Epifanio Benito Vidal Vázquez and Jesús María Colomo Rodríguez, whose statements have been based on the “helplessness” they have suffered since they occurred. the murders of their loved ones.