The Basque Government asks for precaution to circulate through various ports of the CAV, especially Álava, in the face of the snow that falls on them this Wednesday afternoon. With the Winter Road Plan activated in the “Operational Phase”, given the forecast of snow at levels below 700 meters, accompanied by intense rainfall, around 6:00 p.m., cars need chains to circulate around Opaque and Orduña, which are closed for articulated vehicles and trucks, and, in addition, caution is requested in case of passing through the ports of Azazeta, Barrerilla, Port of Vitoria, Port of Salinas and Herrera (Álava) and Arrangizgana (Trabakua), in Bizkaia.

In addition, it should be remembered that the A-15 in its section of Gipuzkoa may suffer cuts if it starts to snow, as stated in the Winter Road Plan of the Provincial Council of Gipuzkoa. In the event of this circumstance, heavy vehicles must circulate on the NI or the Sakana highway and light vehicles may use the GI-2130 road from Berastegi to Tolosa. In any case, it is advisable to check the state of the roads if you are going to drive on them.

In addition, on the A-3302 in Vitoria towards Mendoza, the A-4301 in Vitoria towards Yurre and the A-4302 in Iruña de Oca towards Momario, traffic has remained stopped due to the presence of water on the road. The landslides are also causing some problems in various parts of the Basque geography, on the GI-631 in Zestoa towards Zumarraga or on the BI-2704 road in Barrika towards Plentzia.

On Navarra, The Government recommends to circulate with caution throughout the road network of the Autonomous Community, in the event of probable snowfalls above 500-600 meters. Precipitations that can be locally strong and persistent in the northern third of the Foral Community.

In addition, the passages to France both through Isaba and Ochagavía continue to be closed to traffic due to the presence of snow on the road.

The lowering of the snow level and the increase in rainfall, especially on the Cantabrian slope, will coincide with the last hours of the return operation from the festive bridge, so it is requested to circulate with caution throughout the road network.

Due to adverse weather conditions, the General Directorate of Traffic (DGT) asked people who were enjoying the bridge in towns in the northern half of the peninsula or who, being residents in the north, were in other destinations, and have to circulate by road, that they anticipate the return to their places of origin and do not wait for Wednesday to get on the road.

The Basque Government has activated the yellow warning for snow inside since midnight. The snow level was at 900 m in the early hours but it has been decreasing and throughout the afternoon it will be at 600-700 m. Occasionally it could be even lower, especially in eastern Álava and in areas with more intense rainfall. The expected snow depths are 10-30 cm at 1000 m and 2-15 cm at 600 m. The snow is not expected to set at lower elevations. However, storms with hail are not ruled out on the Cantabrian slope, which could complicate the situation on the roads. 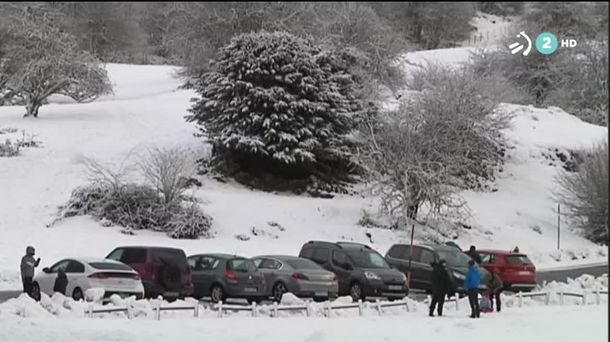