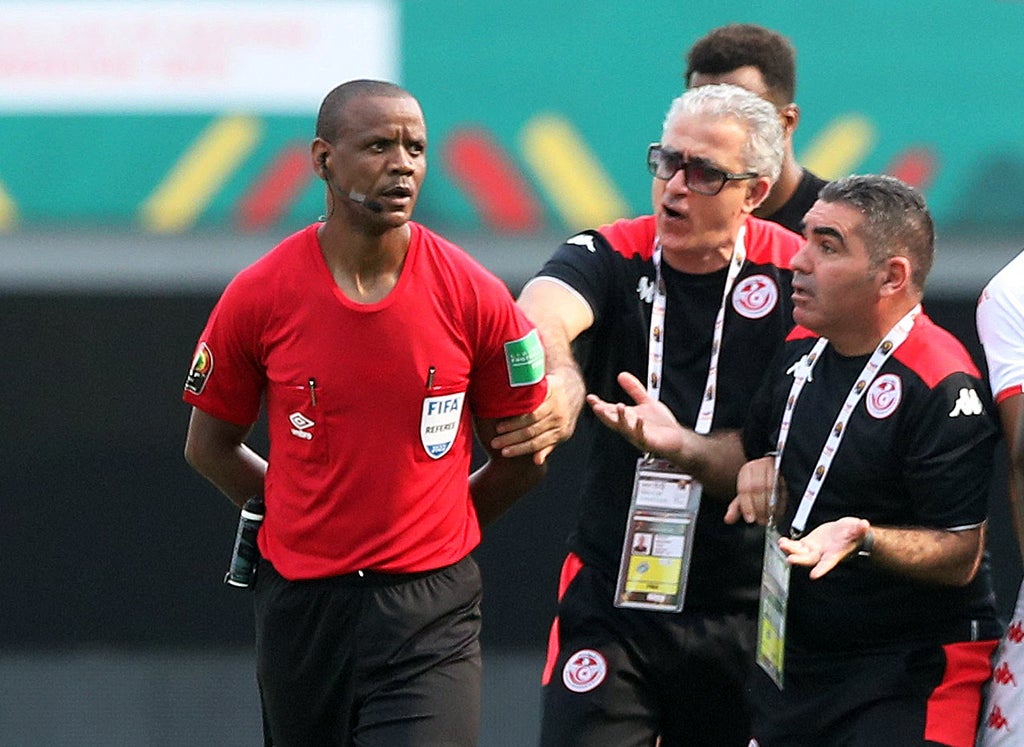 Referee Janny Sikazwe did not have a good game when he oversaw the chaotic Africa Cup of Nations match between Tunisia and Mali.

The Zambian awarded a debatable penalty to each team and raised eyebrows with an extremely harsh red card against Mali’s El Bilal Toure. He then mistakenly blew for full-time – twice – before the 90 minutes were up and allowed no injury time when several minutes were expected.

The episode was treated with amused derision and branded “farcical” by some pundits, but the circumstances were far from funny.

Mr Sikazwe says he was suffering from heatstroke and severe dehydration in the 34C heat in the coastal city of Limbe, Cameroon, causing him to lose track of time.

Heatstroke can cause physical and mental exhaustion, reduced alertness, an increased heart rate, and even sudden cardiac death.

Sikazwe told Zambian media: “I was lucky I didn’t go into a coma. It would have been a very different story.

“I think God told me to end the match. He saved me.”

Cameroon’s tropical conditions, which have seen some games played in temperatures over 30C and high humidity, have caused serious issues at the tournament.

Algerian players have also claimed Cameroon’s climate also influenced the outcome of their 0-0 draw against minnows Sierra Leone in their first match at the Africa Cup of Nations (Afcon).

Of course, heat exhaustion in football is nothing new – in 2019 there were matches played in Egypt at temperatures above 40C – but temperatures across the globe are rising and, despite contributing the least to climate change, African countries bear the greatest burden.

Evidence presented by the Intergovernmental Panel on Climate Change (IPCC) reveals that in recent decades, Africa’s temperatures have been rising and heatwaves increasing.

With the World Cup being hosted in the searing heat of Qatar later this year, what does climate-led warming mean for the future of the world’s most popular sport?

Sport medicine professionals are taking steps to tackle the growing issue, with the priority on prevention, meaning efforts to cool the athletes’ bodies and maintain a healthy core body temperature.

Dr Orr said: “This can be done with extra water breaks, cooling towels, and breaks in the shade. In cases where athletes do show signs of heat-related illnesses, they’ll most likely be pulled from the game for treatment, which is typically rest, cooling, rehydration, and massage for cramping.

“It’s unlikely any severe cases of heat-related illness will present themselves as the medical professionals will be watching the athletes closely and working to address any issues at the earliest stages of heat illness.”

Professor Aimé Bonny, a cardiologist and sports medicine expert at Douala University in Cameroon, says the heat problem is exacerbated by sudden changes in atmospheric conditions.

I have told The Independent: “Moving from one country in the middle of winter to another in the middle of a heatwave harms the body’s adaptation. The first days of competition are the most critical.

“Most of the players in the African Cup of Nations are professionals living in Europe, who are currently playing in zero degrees. Going from -5C to 35C is physiologically complicated.”

Algeria midfielder Haris Belkebla, who plays for Brest in France, told BBC Sport Africa Afcon was “very difficult with the heat, and especially for us who play in Europe”.

Sports medicine expert Dr Josué Bissou Mahop advises the Confederation of African Football, the governing body of African football, and is the permanent assistant physician of the national teams of Cameroon. I have helped set up a system where players are told to hydrate at any pause in play.

He said: “At the handrail, you see bottles of water lined up. At the slightest loss of the ball, the footballer is asked to come and hydrate.

“The doctor and his assistants give water to all the athletes who are instructed to eat and hydrate quickly at the slightest loss of the ball. They can even hydrate in the opposite camp.”

Nonetheless, Prof Bonny suggests Afcon should move to a time of the year less scorching than January and short training sessions repeated several times in one day should replace long training sessions.

But Afcon, which ends this weekend, will not be the only major tournament this year taking part in extreme heat.

The desert sands of Qatar

2022 World Cup host Qatar, a tiny Gulf state known for its scorching desert climate, says it has designed an energy-efficient cooling system that can make its open-air stadiums usable even in summer temperatures that soar well into the 40s.

Football’s next global showpiece tournament was moved to November and December to avoid Doha’s intense summer heat, but Qatar decided to stick with the chilled stadiums to have future venues that would be usable year-round.

Despite the chilled stadiums, Qatar has said its World Cup will have the smallest carbon footprint of any before it.

Nasser Al Khater, chief executive for FIFA World Cup Qatar 2022, said the chilling system requires about a fifth of the typical energy to cool spaces of the same size, such as airport terminals, because it continuously recycles air into small zones.

But Dr Orr says the sophisticated outdoor cooling technologies will not solve everything.

“There is always a risk of heat illness in hot temperatures, and I know there are a team of sport scientists and medical professionals developing a series of procedures for managing heat-related illness, should it occur,” she said.

“For athletes, I doubt the officials will allow any cases of heat illness to become severe, as that would present a reputational risk for the organisers.

“However, there is well-documented evidence that the heat in Qatar has negatively impacted the workers building the World Cup stadiums and the associated construction efforts, and tragically, some have died as a result.”

Further ahead, the 2026 World Cup will be expanded to 48 teams as opposed to 32 and matches will be played across the United States, Canada and Mexico.

Candidate cities include Miami, Atlanta, Orlando, Dallas, Houston, and others which are notoriously hot and humid in the summer.

“With global warming, Paris was 40 plus, the UK 35 plus, so even the Europeans need to look at this carefully,” says Saud Abdul-Ghani, a Qatar University mechanical engineering professor who led the chilled stadium design.