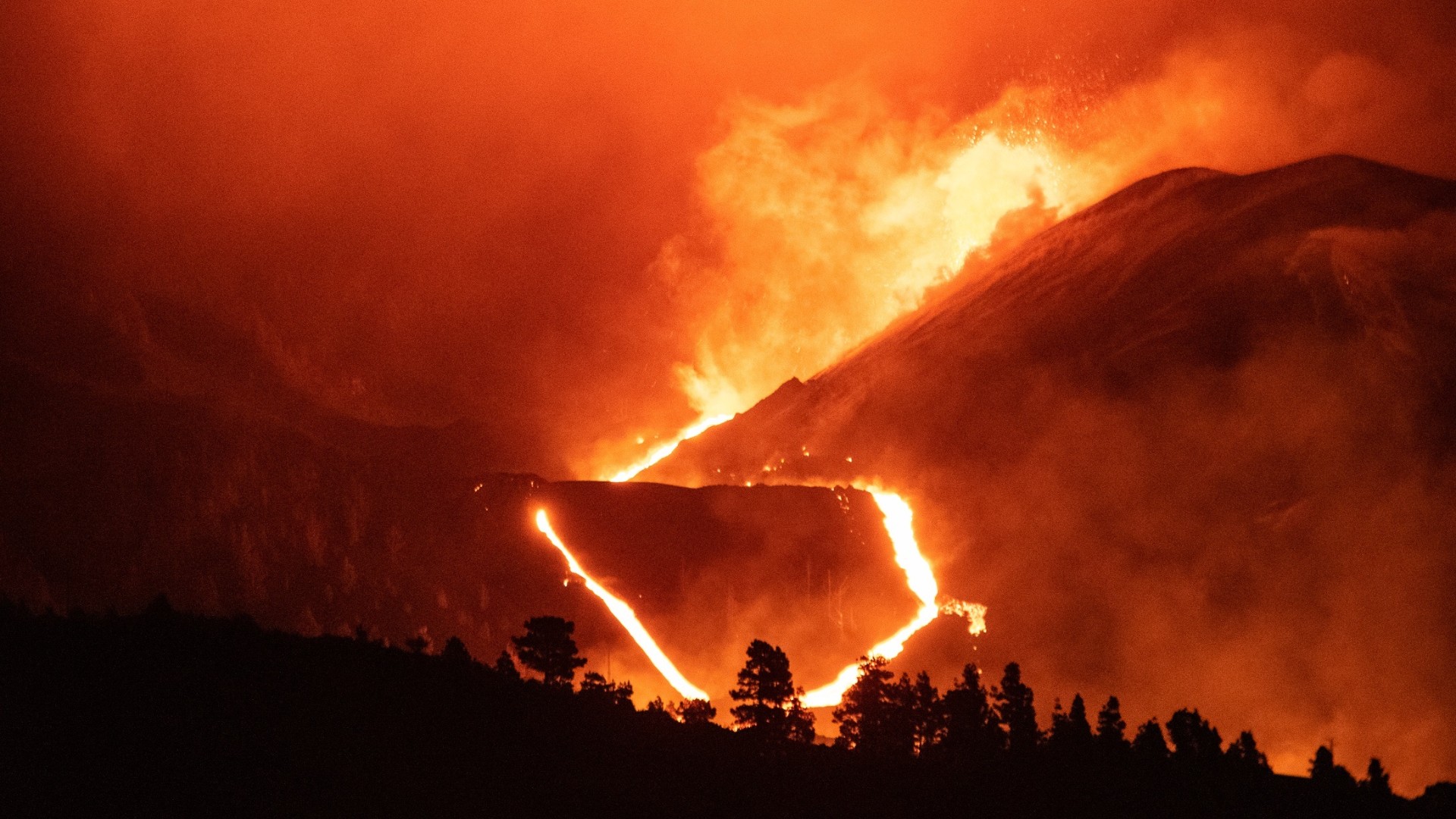 The morphology of the Cumbre Vieja volcano has completely changed this week. The appearance of new emission centers on the northwest flank has ended up forming a new secondary cone from which the magmatic material is emanating, which has stopped sprouting from the main crater.

The spokesperson for the scientific committee of the Canary Islands Volcanic Emergency Plan (Pevolca), María José Blanco, stressed that all emission centers of the volcano were inactive for a few moments around 11:00 last Monday. Blanco has also clarified that the main cone “visibly” does not appear to emit surface lava, but central flows have continued to be fed through lava tubes, and has added that “far from it” it can be ruled out that it will regain all the vigor that the secondary now shows.

It has been produced several landslides inside the crater that has formed in relation to the new eruptive fissure and the lavas are mainly occupying surface on previous flows. The technical director of Pevolca, Miguel Ángel Morcuende, explained that the new wash moves west-northwest direction attached to the previous one or riding on the pre-existing one, number eight, although it presents a overflow near Tajuya and towards La Laguna which is being monitored especially by the authorities.

“Evolution today of the secondary cone of the eruption of #LaPalma from 00:00 to 20:00
The process of continuous growth and destruction of this cone is observed. pic.twitter.com/PrVZT0JxOd“

During the last night he has traveled a mere 100 meters, standing one kilometer from the church of La Laguna. However, Morcuende believes that will soon slow down as it gains in viscosity, unless it receives “a huge push” in its rear area. According to the latest data updated by Pevolca, the area affected by runoff amounts to 1,134 hectares.

According to data from the Cadastre, throughout the eruption I know 1,548 buildings have been destroyed, of which 1,214 for residential use, 169 agricultural, 69 industrial, 37 for leisure and hospitality, 15 for public use and 16 for other uses, while the Copernicus system raises the figure to 2,860 buildings affected, of which 2,748 destroyed.

Seismicity at intermediate depths continues to increase in the last 24 hours, with more than 300 earthquakes this Tuesday, close to the record since the eruption began. In fact, at 10:54 (Canarian time) there was an earthquake of magnitude 4.2 mbLg at 13 kilometers depth, the highest at that range of all those recorded on the island since the beginning of the eruptive process.

“More than 300 earthquakes today in #LaPalma (already close to the daily record) most of them intermediate (between 10-15 km) but there is still deep seismicity with some of them quite large.
A new seismic zone is observed at 20-24 km depth but with very little seismicity pic.twitter.com/3iE5pDSxLf“

In addition, the tremor (the vibrations of the magma in the volcanic building) remains unstable, with several pulses in the last hours.

Regarding the direction of the plume, in the coming days, the winds will disperse the ash and gases in a southerly direction, which will be a favorable situation for aeronautical operations. There is the possibility of occasional rains in the midlands of the west slope and the arrival of Saharan dust is not ruled out, which would worsen the situation of suspended particles.

In the area restricted by the authorities, the data observed in the measurement of gases harmful to health prevented both on Sunday and Monday access from the south for irrigators and workers, due to the orientation of the volcanic plume. This Tuesday, access to the Jedey area has been allowed with caution, as the situation improves.

In this sense, Pevolca held a meeting this Monday at the Camilo León Sports Center in Los Llanos de Aridane to explain to the public how gas measurements are carried out in the exclusion and evacuation zones, the ash cleaning plan in the areas affected by the eruption of La Palma, as well as other doubts in the management of the emergency transferred by the affected neighbors.