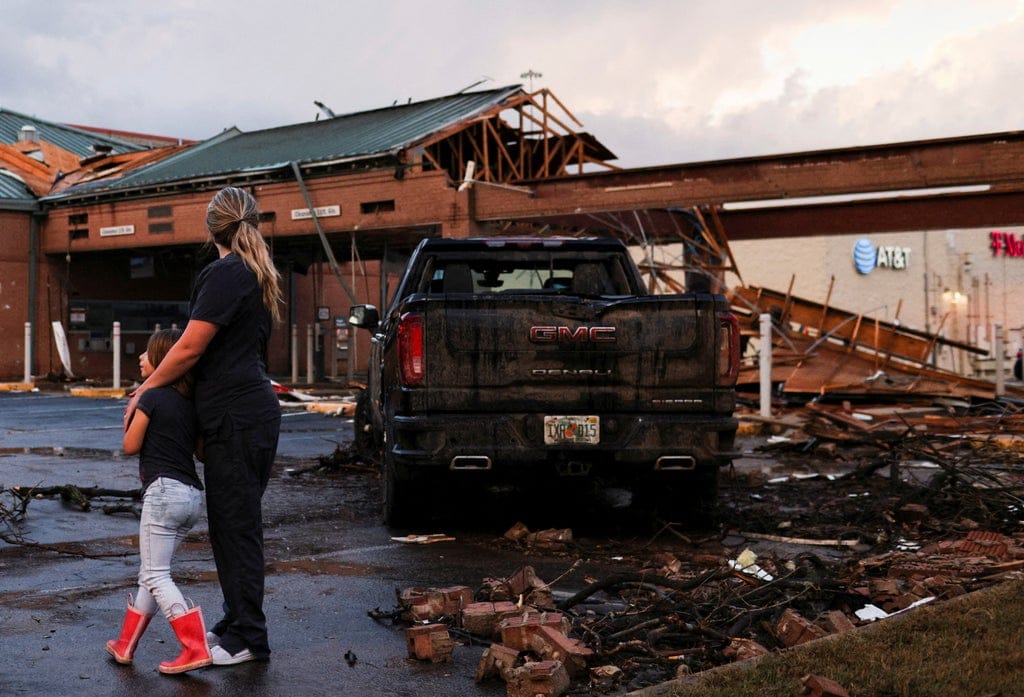 Texans flee for cover as tornado touches down in Round Rock

A storm system that passed through Texas, Louisiana, Mississippi and Alabama overnight has killed one person and wounded an unknown number.

Texas Governor Greg Abbott called the destruction “devastating”, and said it was a “miracle” that more people were not killed immediately.

Several videos and pictures captured on Monday night showed powerful tornadoes causing massive damage to RVs, houses and schools with one video showing a truck driver having near escape after getting tossed into air.

Another video also showed a tornado approaching a Walmart in Round Rock, not far from Austin, which forced customers to flee the oncoming twister.

At least one person was injured when they were dragged across the parking lot, according to footage.

About 22 million people were at risk from coming into the path of severe storms across Texas, Oklahoma and Louisiana, forecasters said, as the storm system moved northwest.

A woman who was driving her camper van when a tornado swept through Round Rock, Texas, has described her narrow escape before the vehicle was overturned by winds.

Liz Creason, who had been living in the camper van for several weeks, told AccuWeather correspondent Bill Wadell she began looking for shelter as soon as she saw severe weather warnings on Monday.

She ultimately stopped at a Walmart and fled inside, knowing she didn’t want to be in the truck when the tornado arrived.

Ms Creason was unharmed but her van was flipped by powerful winds.

“I’m just so thankful to be alive and that I had the foresight to have the stuff ready because if my jacket and shoes weren’t right there, I just kind of stumbled putting them on and that delayed me but if I had to go digging for a jacket or something and another second went by I don’t know what would have happened,” she told Mr Wadell.

ICYMI: Truck is tossed by tornado before calmly driving off

A video of a pickup truck being tossed by a tornado before continuing on its way has gone viral as viewers share their shock that the driver appeared uninjured.

The footage recorded by storm chaser Brian Emfinger shows a twister cutting across a Texas highway on Monday, where it encountered the red truck.

Swirling winds knock the vehicle on its side before it lands upright and continues driving as if nothing happened.

The video has been viewed more than 2.1 million times in less than 10 hours.

Austin-area residents who had tornadoes rip through their neighborhoods on Monday evening are now beginning to see the full extent of the damage.

Texas Governor Greg Abbott had urged those affected to wait until morning to begin surveying the wreckage.

“Do not endanger yourself by trying to rush in and try to save something now,” he said at a news conference on Monday night.

“When you have a tornado rip through a community you are going to have downed power lines, and those are going to be deadly dangerous.”

See also  Coronavirus: The administrative odyssey to get disability due to covid: "I should be at my house"

A tornado watch is now in effect in Harris County, which includes Houston.

Residents were warned at around 7am Tuesday that severe thunderstorms could spawn twisters in the highly-populated area.

A special marine warning was also issued along the coast.

An employee for Williamson County, Texas, where at least two tornadoes were reported, has been hailed as a hero for protecting her family as their home was destroyed.

County Judge Bill Gravell shared the story of the unnamed employee at a news conference alongside Texas Governor Greg Abbott on Monday night.

“From the story that was conveyed to me, she literally laid her body over her nieces to protect them, and they all went to the hospital and got checked out,” he said, according to the Austin American-Statesman. “All of them are alive and well.”

Active tornado watch in parts of Texas and Louisiana

A tornado watch is in effect for parts of southeastern Texas and Louisiana until 2pm local time on Tuesday, the National Weather Service said.

It comes as several other states brace for heavy rains that could bring flash flooding.

The National Weather Service in Memphis has issued a warning for flooding into Tuesday evening for western Tennessee and eastern Arkansas into northern Mississippi.

The warning states that two to four inches of rain will likely lead to the “flooding of rivers, creeks, streams, and other low-lying and flood-prone locations. Flooding may occur in poor drainage and urban areas.“

“You should monitor later forecasts and be alert for possible Flood Warnings,” the warning adds. “Those living in areas prone to flooding should be prepared to take action should flooding develop.”

The Austin metro area was under a flood alerting warning on Tuesday morning following tornadoes and strong winds overnight.

The National Weather Service said flash flooding was possible south and east of Austin, with low lying and urban areas most at risk.

People were advised to remain alert and to “move to higher ground if you hear of flood warnings”.

Warnings still in place for southern US

The National Weather Service (NWS) has continued to issue warnings of further storm winds and tornadoes on Tuesday morning, with an area stretching from coastal and southeast Texas into much of western and northern Louisiana still at risk.

In an update on Tuesday, the NWS storm prediction center said “damaging winds” and “isolated” tornadoes were still possible, and that the situation could change.

As are parts of the lower Mississippi Valley at risk of severe thunderstorms, hail, strong winds and isolated tornadoes into Tuesday.

Customers of a Walmart in Round Rock, a suburb of Austin, Texas, were forced to flee oncoming tornadoes on Monday as storms approached the city.

One video seen on social media showed the tornadoes approaching the Round Rock Walmart parking lot, with people shouting “run, run, run, run.” Debris could also be seen flying through the air.

Another customer meanwhile said she was “dragged across the Walmart parking lot” by storms winds, and shared images of her injuries on Twitter.

Texans flee for cover as tornado touches down in Round Rock

Texas locals were forced to find cover as a “volatile” tornado ripped through the state on Monday.Twisters touched down in the towns of Jacksboro, Luling and Round Rock, while also hitting Oklahoma, damaging multiple homes and buildings, including a school and an animal shelter. Footage shared on social media shows a number of people standing at the door of a Walmart as the tornado touches down close to the car park. Those watching are then forced to dive inside as debris kicked up by the twister fly around in front of them. Click here to sign up to our newsletters.