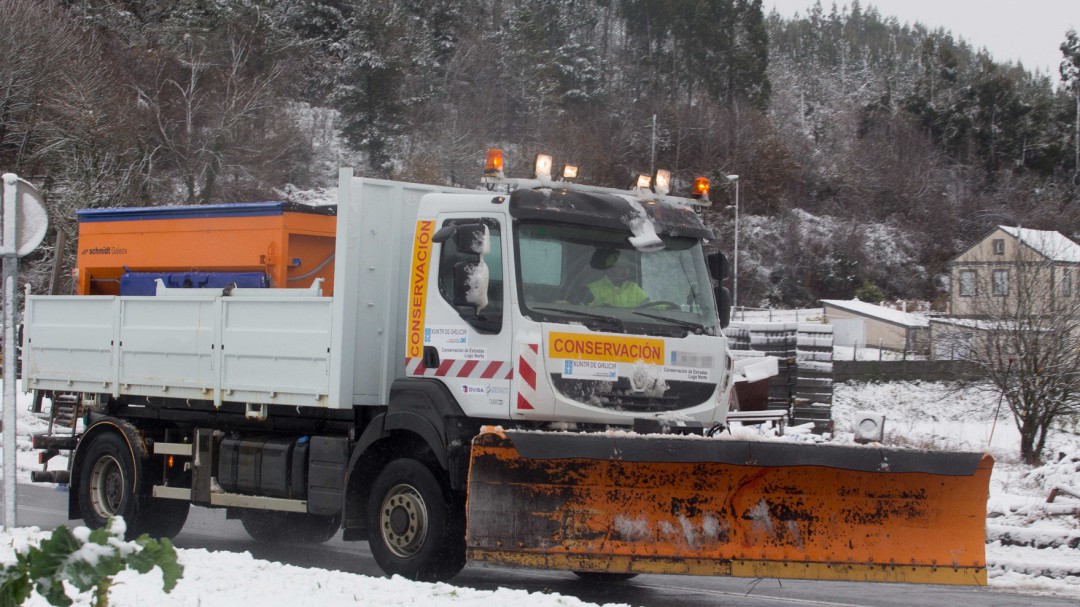 The storm ‘Barra’ has unleashed the alert to 12 communities on its way through the Iberian Peninsula. Of this dozen, nine are at the orange level due to snowfall, rough seas, wind and rain that are feared can trigger avalanches in mountain areas and thaws.

The communities declared this Thursday of important risk (orange alert) according to the State Meteorological Agency (Aemet) are the following: Aragon, Asturias, Balearic Islands, Cantabria, Castilla y León, Catalonia, Galicia, Navarra and the Basque Country. For their part, Madrid, the Valencian Community and the Canary archipelago have been declared in yellow alert (risk).

Consequently, a total of 97.2 kilometers of roads have been declared impassable due to the situation of the roads due to snow, according to the General Directorate of Traffic (DGT).

In order to face the foreseeable consequences of the present storm, the Military Emergency Unit (UME) has deployed 2,900 troops for the current campaign of winter storms, which will have means very similar to those provided on previous occasions, reinforcing aspects determined fruit of the experiences acquired at the beginning of 2021 with the storm Filomena.

This has been explained during the visit of the Defense Minister, Margarita Robles, to the UME headquarters by the unit’s chief of staff, Pedro Aneiros, and its chief lieutenant general, Luis Manuel Martínez Meijide.

Heavy snowfalls and intense frosts in the Pyrenees

The skies are covered in a large part of the peninsula, with heavy rains on the Cantabrian slope and significant snowfalls especially in the Pyrenees area. More moderate rains are also expected in the Central System, southern Iberian and coastal areas of Catalonia, and showers with probability of storms in the Balearic Islands. Increasing cloudiness is expected in the rest of the peninsula, without ruling out some weak precipitation in mountainous areas of the southeast interior.

As for temperatures, the maximums are increasing in the northwest half of the peninsula and decreasing in the extreme northeast. The minimums increase in Galicia and Asturias and tend to fall in the Mediterranean area. In addition, weak frosts can occur in mountain areas, more intense in the Pyrenees.

See also  Inés Hernand: “What has happened with the BenidormFest is a kind of mass hysteria” | TV

Check the predictions in your Community

Asturias: The skies are covered with fogs in high areas and widespread rainfall, which can be locally strong in the eastern half. The snow level rising from 1,000-1,200 meters in the early morning to more than 2,000 at the end of the day. Temperatures gradually increasing with minimums at the beginning and maximums at the end of the day. Weak frosts in high areas of the mountain range. Winds from the west are expected, strong with very strong gusts on the coast and in high areas.

Aragon: Cloudy or overcast skies, with persistent rainfall in the northern third and more intense during the second half of the day. The snow level rising from 500-700 meters to 1,200-1,400 from noon and up to 1,800 at the end of the day in the Pyrenees and north of Cinco Villas and rising from 900-1000 to more than 1,400-1,600 during the morning and above 2,000 at the end of the day in the Iberian system. Minimum temperatures remain unchanged; the maximums are on the rise in the Pyrenees divide and without changes or in slight decrease in the rest. Neladas are planned in the Pyrenees. And the wind will be from a weak to moderate west component, with strong or very strong gusts at high elevations and exposed areas of the Pyrenees and Iberian System.

Cantabria: The skies are covered with widespread and persistent rainfall. The snow level is around 800-1,000 meters, ascending rapidly throughout the morning above 1,600. Rising temperatures, which will be light in the lows. Weak frosts can occur in the mountain range. Winds are expected from the west and northwest, with strong intervals on the coast.

Castile and Leon: Cloudy or overcast skies in the north, east third and Central system, with persistent rains in the extreme north. The snow level ranges from 800 to 1,000 in the east and 1,000 to 1,200 in the west, rising to 1,800 meters in the morning. Minimum temperatures are slightly rising in the northwest and unchanged in the rest, and maximum temperatures are increasing, locally notable in the northwest. Weak frosts can occur in the northern, eastern and central third. Winds from the west are expected, with very strong gusts in mountain areas.

Castilla la Mancha: Cloudy skies in the northeast, with probable rainfall in mountain areas and the snow level around 700-1,000 meters gradually rising during the day to more than 2,000 meters at the end. The minimum temperatures remain unchanged in the northern half and a slight decrease in the rest, and the maximum ones with little change. West component wind, with some strong gusts at high altitudes of the Central system and in the Sierra de Alcaraz.

Catalonia: Cloudy skies with persistent rainfall in the Pyrenees, more intense during the second half of the day. The snow level rising from 500-700 meters to 1,600-1,800 at the end of the day. Temperatures remain unchanged or dropping. Frosts are expected in the Pyrenees. Winds from the north and northwest in the Ampurdán, with a western component in the rest, more intense in the southern half and with strong or very strong gusts in Tarragona and south of Barcelona and in high altitudes of the Pyrenees.

Valencian Community: The sky will be cloudy with minimum temperatures slightly decreasing and maximum temperatures without significant changes. The wind will come from the moderate west, with strong or very strong gusts in the interior in the afternoon.

Estremadura: Cloudy intervals, without ruling out weak rainfall in the Central System. The snow level above 1,000 meters and rising to 2,000 in Gredos, where there will also be cloudy skies or covered with weak rainfall. The minimum temperatures remain unchanged and the maximum ones on the rise. Westerly winds are expected.

Galicia: The skies are covered, with mists and fog banks in high areas and generalized rains, which can be locally strong in the northern third. The snow level is rapidly rising from 1,200 meters at the beginning, to reach more than 1,800 meters. Temperatures are gradually increasing with lows at the beginning and highs at the end of the day. A weak frost is also expected in the high elevations of the Ourense mountain. Winds are expected from the west and northwest, with strong intervals on the north coast.

The Rioja: The skies are cloudy or covered with frequent precipitations. The snow level from 600 to 800 meters, rising in the morning to 1,400-1,800. The minimum temperatures remain unchanged or on a slight rise and the maximum ones on the rise. There may be weak frosts and thaw in the Iberian. Winds from the west are expected, with strong gusts in the mountains.

Madrid: Cloudy or overcast skies opening clear in the afternoon in the south and center of the community. Weak and isolated rains and scattered showers in the mountains, tending to subside in the afternoon. The snow level around 900-1,000 meters at the beginning, gradually rising to more than 2,000 meters at the end of the day. Temperatures will remain unchanged. Weak frosts in mountain areas. The wind from the southeast and plague, and from the northwest with very strong gusts in the mountains.

Navarra: The skies are covered with widespread precipitation, persistent in the northern half and locally strong in the northwest and the Pyrenees. The snow level around 500 meters, rising rapidly throughout the morning above 1,500. Minimum temperatures will show little change and maximum temperatures are on the rise. There may be light winds with a predominance of the western component, increasing in the afternoon mainly in the Ebro and the western third. Very strong gusts are expected on the Cantabrian slope.

Basque Country: The skies are covered with widespread precipitation that could be locally strong in the northern half. The snow level around 400-600 meters, rising rapidly throughout the morning above 1,500. Minimum temperatures remain unchanged and maximum temperatures rise at the end of the day. Westerly winds are expected with strong intervals along the coast.