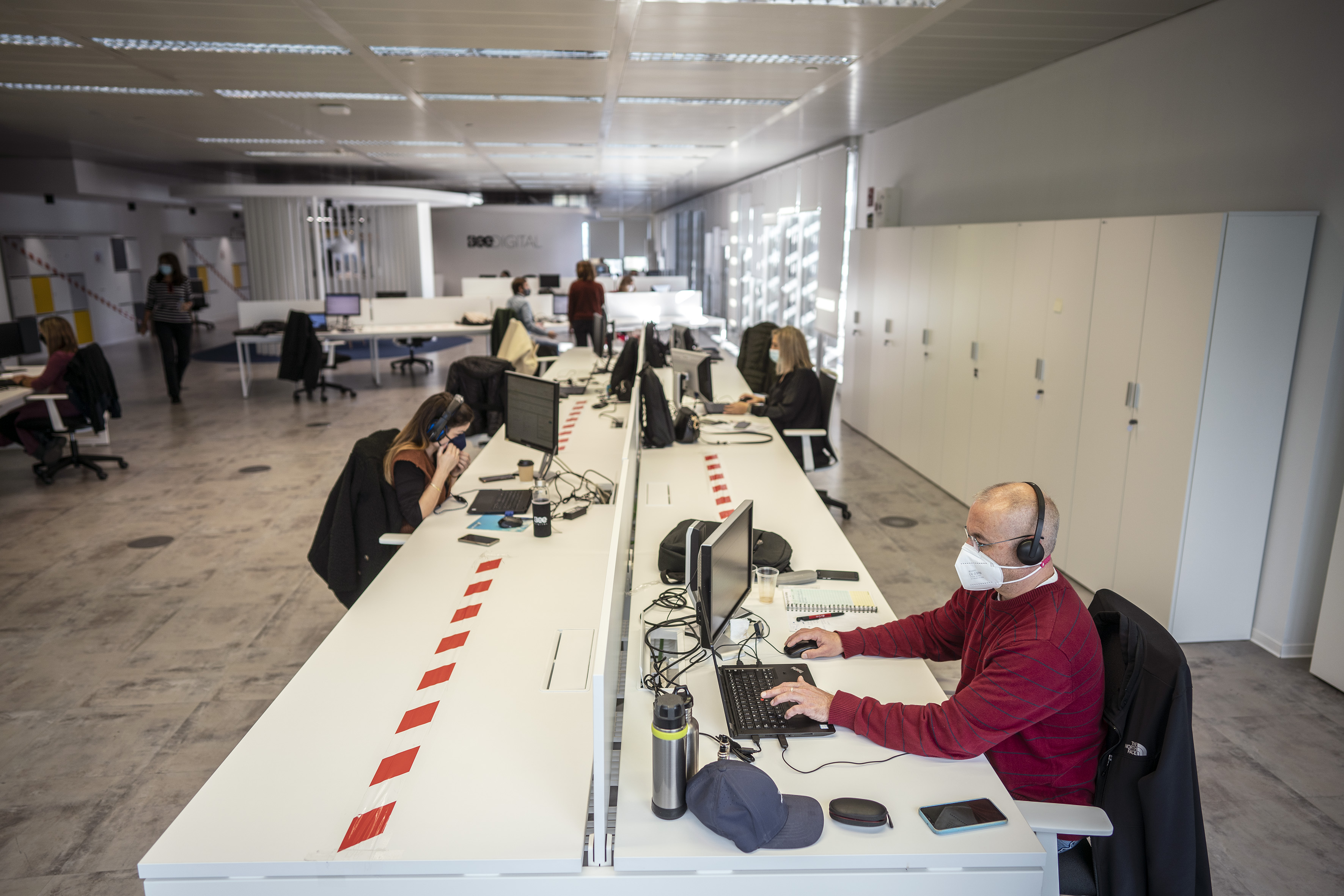 The rapid advance of the new variant of the coronavirus is forcing companies to slow down the return to the office. Telecommunications operators, among them Telefónica, have once again been among the first to implement the possibility of teleworking 100% in the face of the increase in infections, as they already did at the beginning of the pandemic. Other companies, such as BBVA, Banco Santander and Mapfre, are reinforcing the option of working remotely for more time this Christmas in the hope that the situation will normalize. Steps are also being taken in the Public Administrations: the Tax Agency, for example, has established teleworking, except for face-to-face services, at least until January 10 and the Generalitat of Catalonia has set this modality as a “priority” among its employees .

More and more voices from the world of work and health recommend delaying the return to the office. In the central and northern countries of the EU, and in the United Kingdom, they have been recommending for weeks reducing the contact hours before the advance of omicron, which everything indicates is a less aggressive variant than the previous ones, but it is contagious very quickly. This same Tuesday, Portugal announced that it establishes compulsory teleworking between December 25 and January 9. In the Netherlands, until January 14.

Although in Spain there has not been any official directive in this regard from the Government, in recent days large companies and some sectors of Administration are reinforcing teleworking. “What large companies do has a driving effect, but for most small and medium-sized companies to take action, a clear message from the authorities is usually needed,” says José Varela, head of digitization at UGT.

The telecos They are among the first to implement full teleworking. Telefónica de España has opened fire, which, in the middle of negotiating its plan to leave, called an urgent meeting last Tuesday, and agreed with the unions to grant the possibility of teleworking to the entire workforce until 7 January. On that date the decision will be reviewed. Until now, the regime was two days of regulated telework plus an additional flexible one, established in the operator’s collective agreement.

The other three major operators have not been slow to follow suit. Vodafone began full voluntary teleworking last Tuesday and will extend it until January 14 as a precautionary measure. The firm will also close its offices on both December 31 and January 9 and will continue to assess the situation of the pandemic. In addition, the operator offers the possibility of working for four weeks a year from anywhere in Spain (regardless of the pandemic).

Orange has also granted voluntary telework until the same date to its employees since this Wednesday. In the French operator, all office and corporate headquarters employees who do not carry out activities and functions that require physical presence will be able to telework. MásMóvil has been offering all its employees the possibility of teleworking since last week with the same deadline as Telefónica, at the expense of the evolution of the pandemic. Until now, the three operators had a teleworking scheme of three days working from home and two in the office.

Closing the office to telecommute at the beginning of the pandemic in 2020, almost overnight, was very stressful for many companies (it was a little less hard for the technology sector, more used to working remotely). Now, with the advance of the sixth wave, the experience of those months makes the return to telework in principle faster and more bearable. “We have learned to be flexible, to adapt to the conditions; now we are more prepared ”, explains Mireia Las Heras, IESE professor. The expert believes that it is impossible today to set a definitive return date to the office, as some companies have been trying for months, because the pandemic does not allow it. “After the holidays, we will see what happens with the schools and how the infections are going, because the trend is up,” he warns.

In banking, work from home for corporate headquarters staff is being expanded as of this week (offices open to the public are considered an essential service and employees have to go to their jobs). Santander has recommended to their teams to organize themselves to be able to telework, and the guideline is being widely followed, according to sources from the entity. Until now, between 20% and 30% of the workforce was already telecommuting. Around Christmas, according to the evolution of the pandemic, the entity considers doing COVID tests on employees.

At BBVA, they have recovered the voluntary criterion regarding face-to-face work for employees of central services. Until now, 60% was worked in person and 40% of the time remotely. Since December 16, it was recommended to carry out the work day continuously to minimize the use of the dining rooms.

Also in Mapfre they have introduced some modifications, which came into force this Wednesday. On a voluntary basis, the option of working remotely is given, “with the exception of those who occupy management-level positions, as long as the service allows it,” explains the company. People who come to the office can leave at lunchtime and continue in the afternoon remotely to avoid the dining room. Before the spike in infections, 90% of the workforce was in person but with rotations, and 10% continued remotely.

They have not taken any additional measures at Repsol at the moment. Company sources indicate that after the gradual return to the offices as of May 2020, the oil company has maintained a hybrid model that allows teleworking up to three days a week, so that the capacity never exceeds 50%. In all cases, in addition, the working day has been kept until 3:00 p.m. in the office and in the afternoon remotely. The company estimates that close to 70% of the workforce that can telecommute (services at gas stations and refineries, which require employees to be present, are of course excluded) are already doing so in one way or another. Of the 7,000 Repsol employees who can work from home, 2,000 were already there before the pandemic. At Cepsa, as reported by CC OO on social networks last Friday, until January 10 priority is given to teleworking.

At Google, not only in Spain but throughout the world, it has been decided to postpone the return to the offices, which was scheduled for January, until we see how the pandemic evolves. Now you can go to the facilities on a voluntary basis.

One of the most repeated phrases of the pandemic was that teleworking had come to stay, but statistics have shown in recent months that, once contagions were controlled, companies returned to prioritize going back to the office. The number of people who telework regularly (more than half the week) has fallen from 16% in the middle of the pandemic to 8% in the third quarter of the year, according to official data. Juan Varela, from UGT, explains that this work modality has not caught on because face-to-faceism is still valued in Spain. So far this year, clauses with telework have only been introduced in 4% of the agreements and the so-called digital disconnection clause has only been included in 20 agreements.

The new law, which came into force in the summer and establishes conditions for those who telecommute more than 30% of the time and associated costs, does not apply when the workforce is sent home due to the pandemic. “When infections rise, companies allow teleworking, but in many cases when the situation returns to normal it is preferred that the staff return to the office,” he explains. For her part, Mireia Las Heras, from IESE, thinks that it is a pity that the remote work modality is no longer applied: “We should take advantage of the experience, take advantage of what we have learned, but we have learned little in light of the traffic jams. morning ”.