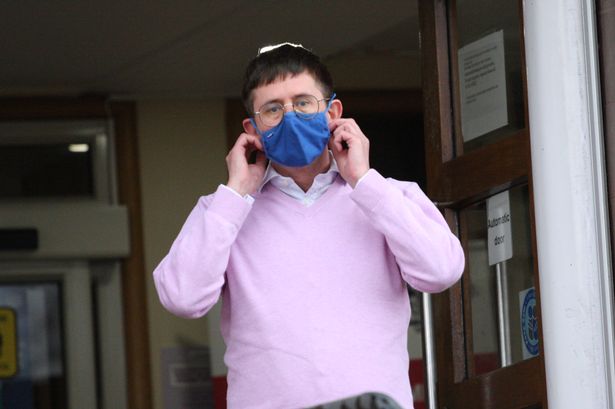 A high-paid computer executive raging at having to travel second class during the Covid pandemic hit a female driver and brought a late-night train to a halt by applying the emergency brake.

Leigh Anderson – who “normally travels first class” – became angry after being told that no first class tickets were on sale for a 10.45pm Scotrail service from Glasgow to Edinburgh last June because of the health emergency.

Anderson, 40, described by his own lawyer as “a pain in the backside”, boarded anyway, but before the train had even reached Croy, the driver, Lorraine Rodger, became aware of him “shouting and being generally obstructive”.

“The witness Rodger explained to him that the First Class section had been designated a ‘safe working zone’ due to Covid-19 regulations.

“He took umbrage and was annoyed that members of staff were allowed in the First Class section but he was not.”

The court heard today that when the train reached Croy Station, Rodger, 53, had told Anderson: “Any more carry on and you’ll be off at the next stop.”

When the train departed Croy, however, she noticed him get up and walk towards the rear of the train.

Miss Sneddon said: “At this point she felt the train come to a stop and knew that this had been caused by the emergency handle having been pulled.”

See also  After a mastectomy I felt both gratitude and pain.

The emergency brake was reset by the driver, and the train continued, but five minutes later the passenger communication alarm was pulled, sounding an alarm in the driver’s cab.

This was also overruled, but the alarm was then activated a further five times, and other passengers told the guard that it was “the same man who had been trying to get into First Class” who had been doing it.

Anderson then “became angrier”, shouting at the driver: “Why can’t I sit in First Class?”, and videoing her.

Sneddon said: “At this point she made a phone call to Scotrail control, and she was struck to the right side of her face by the accused.”

Other members of staff then went to her aid, and when the train reached Falkirk High station, Anderson was instructed by the driver to leave the train, police attended, and Anderson was arrested.

Solicitor-advocate Stephen Biggam, defending, said Anderson, who had never been in trouble with the law before, had been drinking.

He said: “He had been out with friends in Glasgow. Usually he travels First Class and it was news to him that First Class was off-limits.

“He became frustrated that he couldn’t get into First Class and took it as something against him.

“This was wholly childish. He became a real nuisance and pain in the backside to the people on the train that night.”

Sheriff Derek Livingston sentenced Anderson to a 108-day restriction of liberty order, requiring him to wear an electronic ankle tag and subjecting him to a 7pm to 7am curfew, and ordered him to pay £750 compensation to Ms Rodger.

He told him: “I’m prepared not to impose imprisonment, bearing in mind you are a first offender, but your behavior was appalling.”

Leaving court, Anderson refused to comment to a reporter.