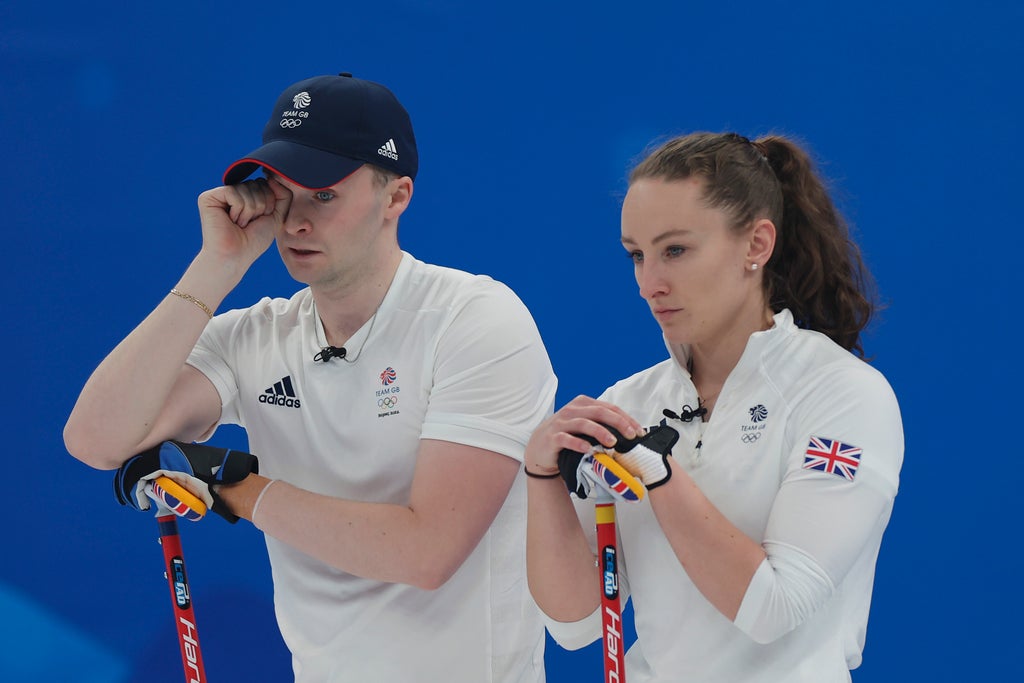 Curlers Bruce Mouat and Jennifer Dodds have gripped the nation but the Olympic spotlight was a bad place to be when they bombed out of their bronze medal match with Sweden.

“It’s nice to be on the TV so much back home but to be 9-1 down in a game like that isn’t exactly a fun situation to be in,” said Mouat. “It’s pretty raw.”

A sloppy second half proved Britain’s undoing in their 6-5 semi-final loss to Norway, but this time it was a horrific start that saw them 7-1 down after three ends.

Shipping four in the second was the sucker punch and the world champions and one of the pre-Games gold medal favorites emerged from a topsy-turvy tournament with nothing.

“We’re obviously very gutted,” said Mouat. “We’ve put in a lot of effort in the last two months to get to this point. We’re gutted to leave this tournament without a medal because we felt we were in the form to win one.”

Britain opened the scoring in the first end but Mouat misfired on a raise and Dodds failed to promote another stone with the hammer, squandered opportunities that set the tone.

The Swedes blew the game apart in the second end, when Oskar Eriksson played a wonderful takeout and Almida de Val dislodged two stones to score a fantastic four.

Things didn’t improve in the third, Dodds missing a double takeout on the final stone as Sweden stole three and took an unlikely seven-point lead.

In the opening game of the round robin, De Val missed a regulation takeout with the last stone of the match that allowed Britain to escape with a 9-5 victory.

But she was in irresistible form when medals were on the line and Eriksson, a member of Niklas Edin’s men’s rink who will rival Mouat’s for gold, was at his consistent best.

The halfway mark didn’t herald a shift in momentum and Sweden’s dominance was summed up when they stole one on Britain’s powerplay, that normally helps teams score heavily.

Dodds has found the going particularly tough against Sweden – her two lowest shot percentages of the tournament both came against De Val and Eriksson. She shot 61 per cent in the opener and 56 per cent in the bronze medal match.

The pairs shook hands with two ends to spare as Sweden sealed a ninth Olympic curling medal and Team GB fell short of their fifth.

The challenge for Mouat is to raise his game and his spirits to skip his men’s team on a gold medal charge, expectations befitting their performances in recent years.

“As a men’s team we have trained unbelievably hard for this moment,” he said.

“I don’t want to let my team down by feeling sorry for myself for one event that hasn’t gone right for us. Both of us are going to turn it round and we’re both going to play amazing next week.”

Dodds will make her debut in the women’s competition under Eve Muirhead, joined by Vicky Wright and Hailey Duff.

“The plan is now to go and be strong with our teams,” said Dodds.

“We’ve got two more medals to go for. They’ll be stepping on the ice for the first time at the Olympics and I just want to be there in the team and do the best I can for them. I’m sure they’ll want to do the same for me.”

Coach David Murdoch could offer a salutary tale having narrowly missed out on the podium on his first two Olympic appearances, coming fourth in 2006 and fifth in 2010. He went on to claim silver at Sochi in 2014.

“Some of the learnings that they’ll have from this week will really stand them in good stead,” said Murdoch.

“Now they’ve got another chance – both of them – and that’s so important.”