Marisa Fotieo, from Chicago, US, was flying to Iceland when she tested positive for Covid in the plane’s bathroom – she then spent the next four hours isolating in there to protect other passengers from the virus Teacher quarantines in bathroom on plane after Covid result

A teacher was forced to stay in a plane toilet after finding out she had coronavirus on the flight.

Marisa Fotieo, from Chicago, US, was flying to Iceland when she took a rapid Covid test in a toilet and discovered she had the virus.

She informed a flight attendant who then told her there were not enough empty seats for her to isolate on the plane.

Marisa then offered to stay in the bathroom for the rest of the flight to protect other passengers, NBC News reports.

Marisa filmed a video of herself inside the bathroom and shared it on Tik Tok, where it has received more than four million views.

The tourist is now quarantining in Iceland for 10 days, while her father and brother, who were also on the plane, continued on to Switzerland after testing negative for Covid.

Speaking about her experience on the Iceland Air flight, she said: “It was a crazy experience.

“I just took my rapid test and I brought it into the bathroom, and within what felt like two seconds there were two lines (indicating a positive test).

“There was 150 people on the flight, and my biggest fear was giving it to them.”

Marisa quarantined for 10 days after her plane landed in Iceland
(

It comes after Brits ended up stuck on a British Airways flight for more than five hours after the pilot received a positive Covid test earlier this month.

The flight, which was heading to Barbados, was delayed after the pilot received the news while in the cockpit.

Among the passengers was Darcy Bourne, 20, a professional hockey player who plays for England.

She had got on the flight at 9am from London, but almost two hours later, the flight still had not taken off.

The passengers were informed that they could not leave as the pilot had tested positive for the virus.

Ms Bourne, who is from Surrey, spoke about the delay in a series of three TikTok videos.

In the first video, she said: “Pilot just got a text saying he tested positive so we’re all stuck on the plane.”

In the video, the pilot can be heard saying: “What we’re currently doing is looking for another pilot to take my place and that process is ongoing, but it’s not going to happen quickly and at the moment we have got people in the process of trying to find someone.”

In the second video, taken in the airport’s departure lounge, Darcy says: “Update: they kicked us all off five hours later and gave us all £4 food vouchers.”

See also  What is Risk? And Can You Handle It? 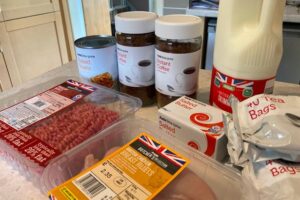