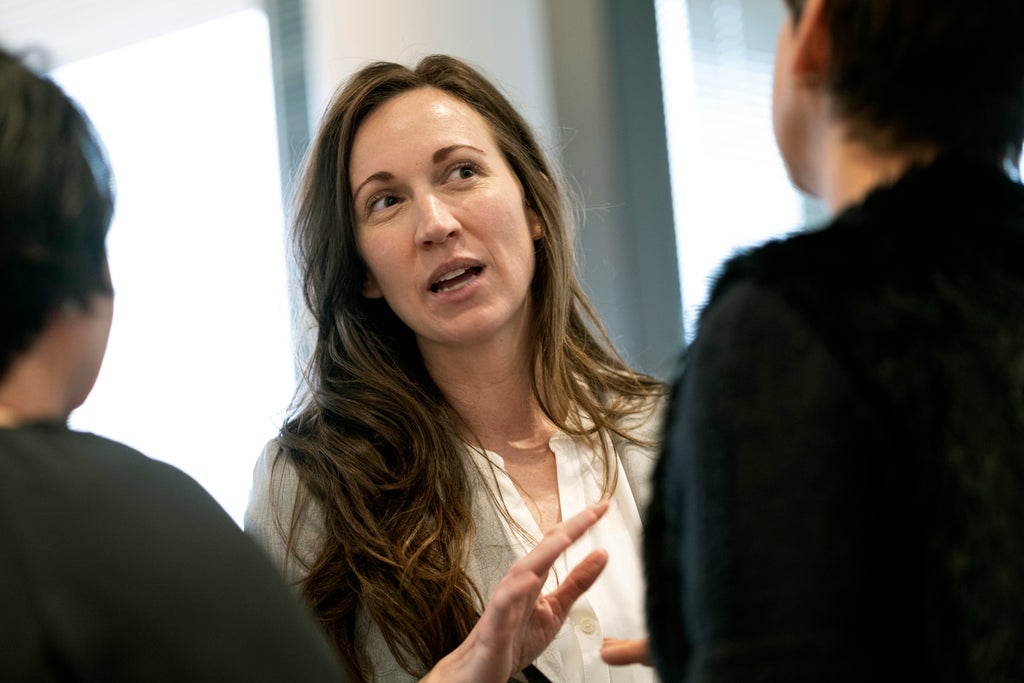 In her pitch to voters, Jennifer Strahan introduces herself as a mother, a Christian and a conservative. She usually skips over the fellow Republican she hopes to topple later this spring: Rep. Marjorie Taylor Greene.

That’s because virtually everyone in this northwest Georgia congressional district already has an opinion about Greene, whose extreme rhetoric has left her stripped of committee assignments in Washington and her personal Twitter account permanently banned.

“You don’t always have to go around and tell people what she has done or said,” Strahan, the 35-year-old founder of a suburban Atlanta health care advisory firm, said in an interview. “That’s known.”

In her first term in Congress, Greene has emerged as one of the most prominent voices of the GOP’s far-right fringe, touting racist and antisemitic tropes, engaging in conspiracy theories about the coronavirus and vaccines and embracing former President Donald Trump s lie that the 2020 election was stolen. As she seeks reelection promising more of the same, Strahan is among a small group of challengers during Georgia’s May 24 primary who argue they can deliver Republican values ​​without the sideshow.

“I think people in this district are mostly tired of her crap,” Charles Lutin, 69, a retired physician and Air Force flight surgeon who is another Republican trying to unseat Greene, said in an interview. “It’s not anything like 95% are tired of her. But I think it’s a good strong majority.”

The race is unfolding in one of the nation’s most significant political battlegrounds. In 2020, President Joe Biden was the first Democrat to carry Georgia since 1992. The state is now represented by two Democrats in the Senate The fall campaign includes closely watched races for Senate and governor where Republicans are hoping to make up for lost ground.

But in some corners of Greene’s territory, there’s a sense of exhaustion from the nation’s overheated politics.

David Harvey, an 85-year-old retiree in Rome, Georgia, voted for Trump in 2016, but he-said the former president so divided the party that it led many Georgia conservatives to stay home rather than keep voting Republican. He said he wouldn’t vote for Greene, who believes “rode Trump’s coattails” to notoriety for all the wrong reasons.

“You don’t want to be a national figure for having been stripped of your committee assignments,” Harvey said.

Greene declined to comment for this story. Her district of Ella, which stretches from the Atlanta exurbs to the outskirts of Chattanooga, Tennessee, is firmly Republican. And a massive fundraising advantage will help Greene fend off her opponents from her.

Her campaign raised nearly $7.5 million through the end of last year, including a $250 donation from Fox News Channel host Tucker Carlson. That’s compared to the less than $120,000 Strahan and Lutin reported combining to raise as of Dec. 31.

Greene’s strength can be found along the country roads pushing into the Appalachian foothills where her red, white and blue campaign signs are abundant. They urge supporters to “flood the polls” and “Save America from Communism.” Bumper stickers proclaim “Trump: He will be back.”

The Republicans seeking to defeat Greene may benefit from new congressional maps approved by the GOP-controlled state Legislature that shift the district ever closer to the Atlanta region.

It already includes booming exurbs in Paulding County, such as Hiram, an eleven-quiet railroad town about 35 miles from the city that is now a thriving bedroom community. But it now picks up a slice of Cobb County, a core part of the metropolitan area and a onetime GOP stronghold that shifted steadily to the left during the Trump era.

The changes mean that Greene may not be able to rely solely on the Trump-aligned base in the rural swaths of her district, and will have to compete for at least some moderate voters who may be less amenable to her antagonistic politics.

See also  Travel 2022: Full steam ahead on The Aberdonian

“Republicans nationwide, as well as Republicans in that district in Georgia, do understand and do want to look to the future, and what is best for the nation,” said Bobbie Kilberg, a well-known national GOP donor who helped organize a recent fundraiser for Strahan in Washington. “And Marjorie is not that person.”

Tom Pounds, who resigned last year as Republican Party chairman in sparsely populated Dade County for many reasons, including Greene and the GOP’s divisiveness statewide, said the new maps “did not do (Greene) any favors.”

But “she will be very difficult to defeat based on the far-right, rural area support she has,” Pounds said.

Ahead of the primary, Greene’s GOP opponents are honoring their appeals to voters.

Strahan is portraying herself as the conservative alternative to Greene without the drama. She promises to defend Trump’s policies and beat back the “radical left.” She says she felt compelled to run for Congress because of her 6-year-old son and “a lot of very progressive policies” across the US that could “potentially take away many of his freedoms if we don’t stand up.”

But, she said, she’s not interested in being a “celebrity.”

Lutin, whose yard signs feature his name alongside a stethoscope, is more moderate. He calls himself “anti-Trumpist” and promotes less government spending. But he also advocates for higher taxes on the rich and embraces bipartisanship.

Lutin is Jewish and objects to what he calls Greene’s “hate and blatant antisemitism,” including her comparison of House mask rules — which Greene has been fined repeatedly for violating — to the persecution of Jews in Nazi Germany. But Lutin also said some district GOP officials have bristled at the idea that Greene is facing any primary opposition — especially in its rural, northern areas.

For her part, Greene has been campaigning in the district recently, sometimes drawing standing ovations when she mentions sponsoring a proposal to impeach Biden. But she is also tending to her national brand of her, appearing recently in Cincinnati with JD Vance, the “Hillbilly Elegy” author turned outspoken Trump supporter who is running for a Senate seat from Ohio.

“Every attack. Every lie. Every smear strengthens my base of support at home and across the country, ”Greene tweeted last year, before her personal account of her was permanently suspended.

Distaste with Greene has also fueled donations for Democrats, with Army veteran Marcus Flowers raising $4.6-plus million by the end of last year. Three other Democrats vying to face Greene in November’s general election collectively took in nearly $2 million.

That includes Holly McCormack, a 37-year-old small business owner and conservative, rural “dirt road Democrat” from Ringgold, near the Tennessee line, who was recently turned away from a Greene town hall in her hometown.

McCormack said her campaign identified 12,000 likely Democratic voters who had moved into the district but not registered. Still, she knows she’ll have to attract Republicans to have a chance, and she has tried to boost her bipartisan appeal — including having dinner with the Harley-Davidson Club in rural Walker County, “so they can see I do n ‘t have horns.”