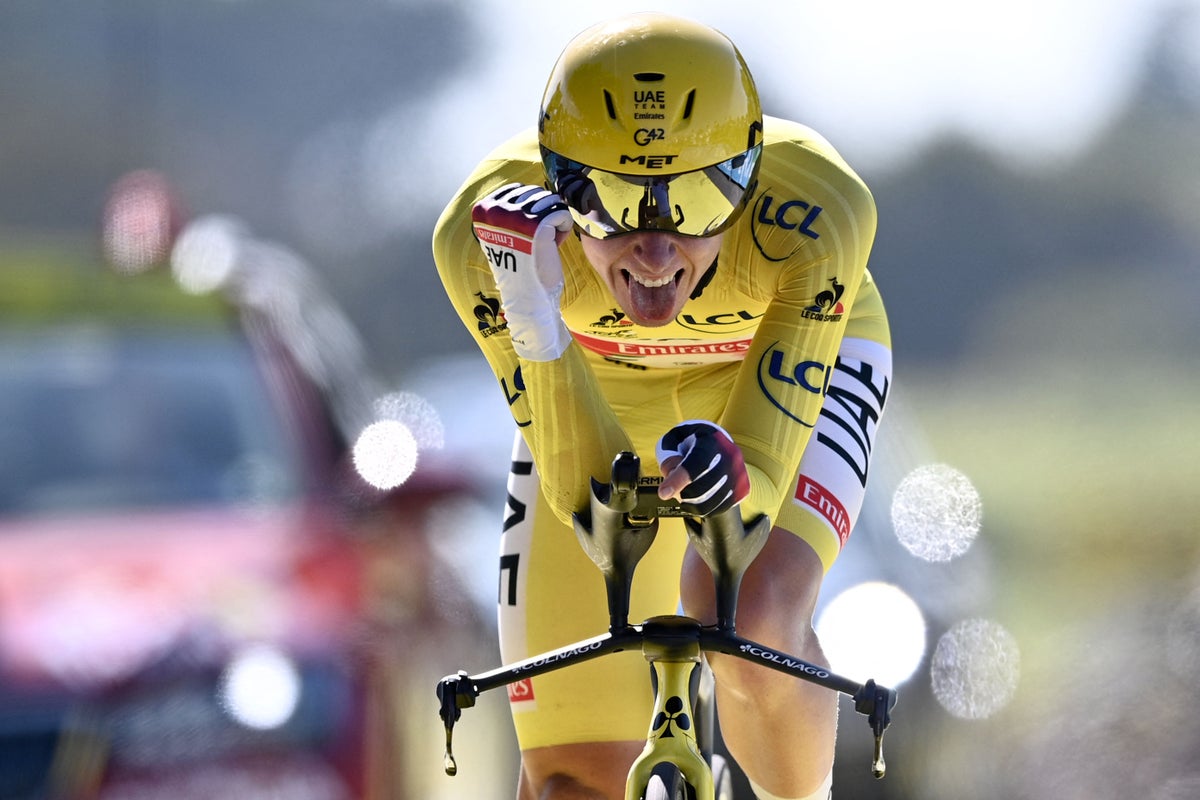 In Monaco, Tadej Pogacar blends into the city. He walks invisibly through the streets and potters freely around his local supermarket. Even in his favorite bike shop, the double Tour de France champion queues among the Muggles without being disturbed. “I like to go inside and see what’s new, and of course I don’t mind if there’s customers in front of me, it’s normal,” he says.

By all measures the double Tour de France champion should be one of the most recognizable athletes on the planet, a bonafide global superstar unable to walk through a hotel lobby without dark glasses and an entourage, but somehow he has not yet transcended the sport. One suspects if he was from cycling’s European heartlands or the US with a name that rolled off the tongue, his profile might be a little different. His “TP” brand with an eagle motif and a “never give up” tagline is yet to take off quite like Roger Federer or Tiger Woods.

But understated and low-key is how Pogacar approaches life and cycling, just riding for the joy of it, an ethos which has brought rich rewards so far. After winning back-to-back Tours de France, an historic third next month would set him firmly on course to be one of cycling’s all-time greats, and what makes it all possible is just how little he is driven by his own sporting legacy . “For me that’s not something that I would enjoy after [my career] too much and brag about it. I work hard to win a lot of races, but for me the priority is just to be a good friend to my friends and have good relations with the people I want in my life.”

Pogacar is sitting in a lodge in the Italian Alps where he’s been preparing for the Tour, which begins on Friday. He likes it here because he can drive over the border and be home in a few hours – Monaco might be his place of residence these days but it is clear that “home” to Pogacar still means Slovenia. “For me honestly the hardest part of racing is being away from your home so much. It’s our passion and we live a good life so I will not complain, but if you don’t enjoy it anymore, the cycling life, if everything starts to bother you then it’s better if you just find something else that makes you happy.”

Among his 10 victories this season have been many different ways to win, from the gradual grinding of opponents into the dirt to late solo bursts and even what he describes as a “stupid, dangerous move” to win the prestigious Strade Bianche with an attack over treacherous gravel 50km from home. Of the final three stages of the Tour of Slovenia this month, the only one he didn’t win was decided over a game of rock, paper, scissors with his teammate approaching the finish line (Pogacar chose paper to Rafal Majka’s rock and so finished second).

His attacking style is part of a trend at the top of the sport embodied by entertaining riders like Mathieu van der Poel and Wout van Aert, rallying against the image of elite cycling as methodical and formulaic. “I think cycling is getting more adventurous than it was before,” he insists. “Now all the younger riders, we race more on an instinct and to get it over as soon as possible. I would say not to wait the last moment because you never know what can happen, so I think that’s why everyone now tries to seal the deal before before the last days.”

In road racing this is a delicate balance: push too soon and your body gives out, wait too long and you miss your chance. Every possible factor feeds into a rider’s calculations – distance remaining, energy in the tank, rivals’ styles and strengths, course pinch-points, weather – but it comes down to an innate sense of timing, and the best riders can feel it. What follows can be a game of bluff as they assess their surroundings as well as their rivals, and judge when to turn the screw.

“I always look around, check everybody how they pedal, if they climb the same as the day before,” Pogacar says. “You know best when you go for it, then you see what damage you can do.”

Yet for all his winning, he is ready to lose. “Statistically, if you look at it, one day you need to lose. So maybe it’s this year, maybe next year, you never know. There needs to be a time when you lose, it cannot always be win … I’m pretty lucky with my results until now but there will be a moment when I will have a shit year or some tough stages or something like that, and I need to be prepared. It’s part of success and failure.”

Ironically Slovenia is the one place where he cannot go undetected, given his national fame is up there with Luka Doncic and Melania Trump and everybody knows his face. “Sometimes it’s a bit annoying but I’ve got used to it,” he says. Family is everything, and each summer his proud brother and sisters haul a campervan across Europe to see him ride through the French Alps. “They are not the kind of fans who jump on the road but I notice them, and even if I don’t see them, just the thought they are there is comforting and motivating.”

As a child he and his brother would unicycle around town and people would stop and stare, until the day their unicycles were stolen. He was obsessed with the Tour de France, watching it on TV before going out on his bike pretending to be his hero Alberto Contador. There is a famous story of Pogacar’s first race, when influential national coach Andrej Hauptman looked on at a tiny kid lagging behind the rest and suggested he shouldn’t be racing against bigger riders. Oh no, Haptman was told, that little boy is winning and he’s already lapped everyone.

Pogacar hasn’t stopped beating the bigger boys ever since. He has achieved an astonishing amount for someone so young – at 23 his closest rival Primoz Roglic had barely raced, Chris Froome was only just turning professional and the great Eddy Merckx was still yet to win the first of his five Tours. Merckx has tipped Pogacar to break his many records of him and even dubbed him “the new Cannibal”, a reference to his own racing nickname of him.

This prodigious performance from youth earns Pogacar some legitimacy in a sport with such a checkered past. Even so, he still gets constant doping questions, which often focus on the integrity of his controversial team principal Mauro Gianetti. “I completely understand all the questions because so many bad things have happened,” Pogacar says. “In cycling no one trusts anybody, which I completely understand, but it’s quite annoying if someone just keeps saying something, it annoys you and bothers you and it’s not a nice thing to say.”

It is just about that only thing that riles him, and oddly it might be this level-headedness which makes him an intimidating presence on the start line. Pogacar has always preferred to be the unassuming challenger going under the radar in racing and in life, but he comes into this Tour de France chasing history, and with a target on his back from him. The strength of rival teams like Ineos and particularly Jumbo-Visma will test him, and perhaps even stop him from winning No 3 and joining a select band of legendary riders to have completed the three-peat, but they cannot diminish the fun of racing.

What would winning three in a row mean to him? “If I don’t win I will not stress myself about it,” he replies. That is exactly why he’s favorite to do it.