Skip to content
Home News T-MEC: North America seeks to rearm itself in the face of China’s trade boom 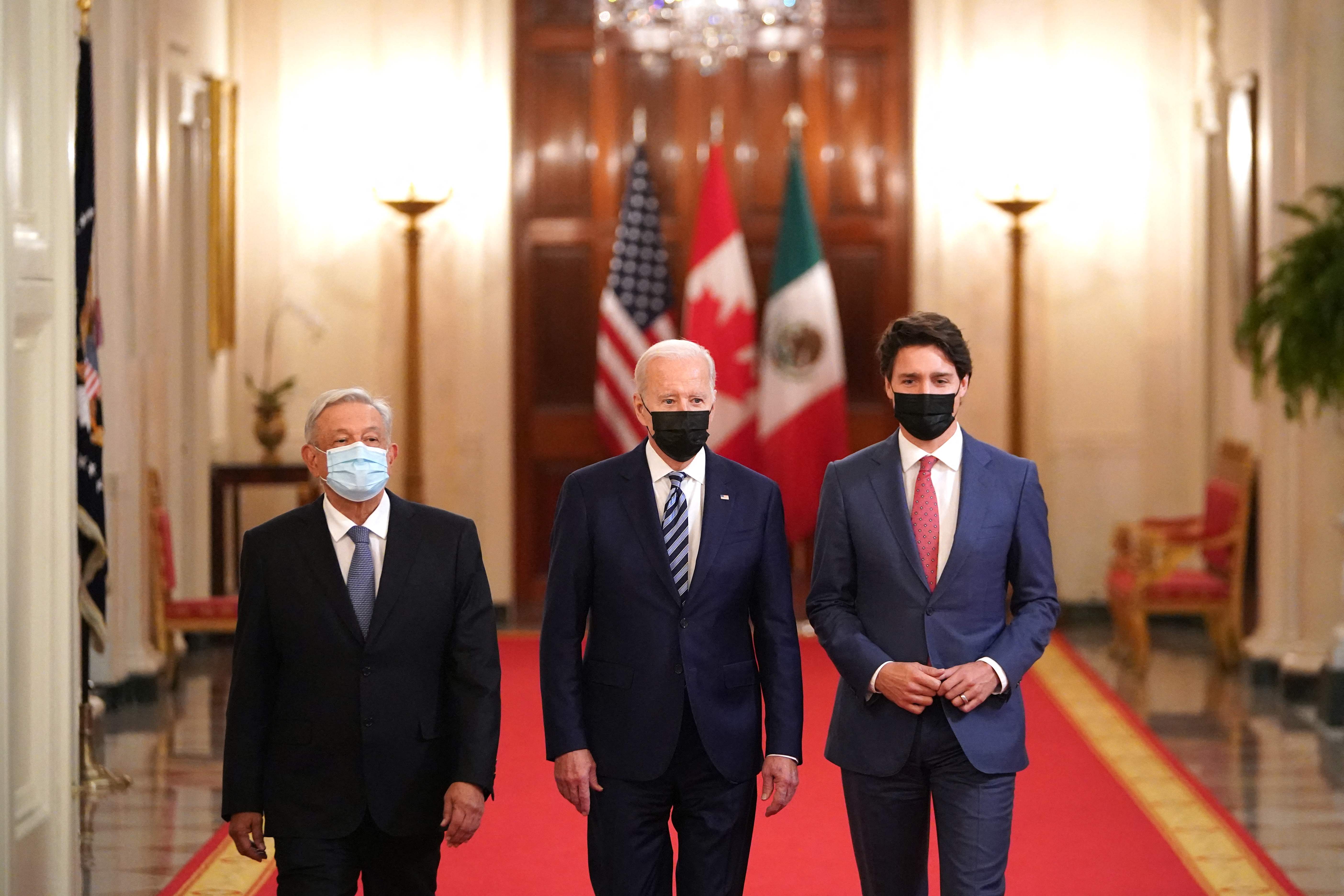 It was a summit of North American leaders with an agenda eminently focused on the challenges of the region, but China, its commercial boom and its dominance of the markets have led to an in-depth reflection in the trilateral meeting between the United States, Mexico and Canada . The quote, known colloquially as the Three Friends, This Thursday was the framework to propose a strengthening of the alliance against the Asian power. The Mexican president has taken charge of this, at the beginning of a meeting that has lasted for two hours at the White House. Andrés Manuel López Obrador, usually very cautious in his comments on the plans of other governments, has issued a clear warning on this occasion in the face of Beijing’s economic expansion and the threat it poses to North America if its leaders sit idly by.

The new trade agreement, in force since July 2020, known as T-MEC, is in López Obrador’s opinion, “the best instrument to face the competition derived from the growth of other regions of the world, in particular the productive expansion and China Trade ”. The politician has shelled some data to defend his proposal before the American Joe Biden and the Canadian Justin Trudeau, and has referred to the problem of shortages that has put the North American economy in check on the eve of the Christmas shopping season. “Let’s not forget that while Canada, the United States and Mexico represent 13% of the world market, China dominates 14.4% and this gap dates back just 30 years, since in 1990 China’s share of 1.7% and of North America of 16% ”, has said.

But the alarm bell has to do with the future. The panorama that López Obrador has drawn from the projections of his Government attributes to China, if there is no change in trend, “the dominance of 42% of the world market” within three decades. “We would keep 12%, which in addition to being an unacceptable disproportion in the economic field would keep alive the temptation to bet on solving that disparity with the use of force, which would put us all in danger,” he said. In this context, he emphasized, “the best” is to promote regional integration. “Strengthen commercially in North America and throughout the continent,” he specified.

There are several premises that make it possible, according to the Mexican president. “We have a young and creative workforce, with technological development and a great wealth of natural resources. The distance between our countries allows us to save on transport and there is sufficient demand in our markets. Per capita consumption in America is $ 18,100 per year, while in Asia it is $ 4,400. However, nowadays a consumer in our region has to be put on a waiting list to buy an appliance and a car ·, he lamented. “Why can’t we produce what we consume in North America? Of course, it is a matter of definition and regional economic strategy ”, he continued.

López Obrador has also taken advantage of the defense of a plan to curb dependence on China to promote his vision on migration. In his opinion, North America must “stop rejecting migrants, when to grow you need a workforce that is not sufficiently available in the United States and Canada.” “Why not study the demand for labor and open the migratory flow in an orderly fashion?” Beyond the different criteria for this phenomenon, the summit has represented an opportunity to re-promote the alliance that during the term of Donald Trump was torpedoed by the former president in the name of his contempt for foreign policy. This North American summit, which began in 2005 with the ambition of being annual, had not been held for five years.

The Mexican Foreign Minister, Marcelo Ebrard, has summed it up like this at the Mexican Embassy in Washington: “An idea of ​​a common vision of North America is reinstated in economic terms, of technological development, of joint design, of acting in common agreement in the face of different types of circumstances and difficulties ”. And China is precisely one of those fronts. A very clear signal had already been sent in the morning by Joe Biden during his bilateral meeting with Justin Trudeau, stating that he is “considering” partially boycotting the Beijing Winter Olympics to be held next February. And when asked about the rise of autocratic systems like the Chinese, the US president has defended democratic values. He has done it before his face to face with López Obrador. “I am sure that we are both committed so that democracy really helps our peoples. Democracy in the last 20 years has been reduced, they are less [las democracias]”, has manifested.

The problem of shortages is one of the most worrisome in this fall of discontent in the United States, a country until not so long ago synonymous with the land of plenty, which now faces empty shelves in supermarkets and delays in the delivery of orders during the most consumerist time of the year. A shopping feast that starts on Halloween, October 31, registers another peak on Thanksgiving, the fourth Thursday of November, this year, the next day 25, continues during Black Friday and lasts for the rest of the Christmas campaign . Reasons for this perfect storm include the disruption of the supply chain from Asia, due in part to the delta variant of the coronavirus, poor infrastructure in a country that is more obsolete than it appears, and the strong return of the American consumers to the shopping arena after the pandemic halt and lockdown. All this, together with the inflation data known last Friday, the highest in the last thirty years, has plunged the acceptance levels of Joe Biden, which barely exceeded 40% just one year after winning the elections. 2020 presidential elections.