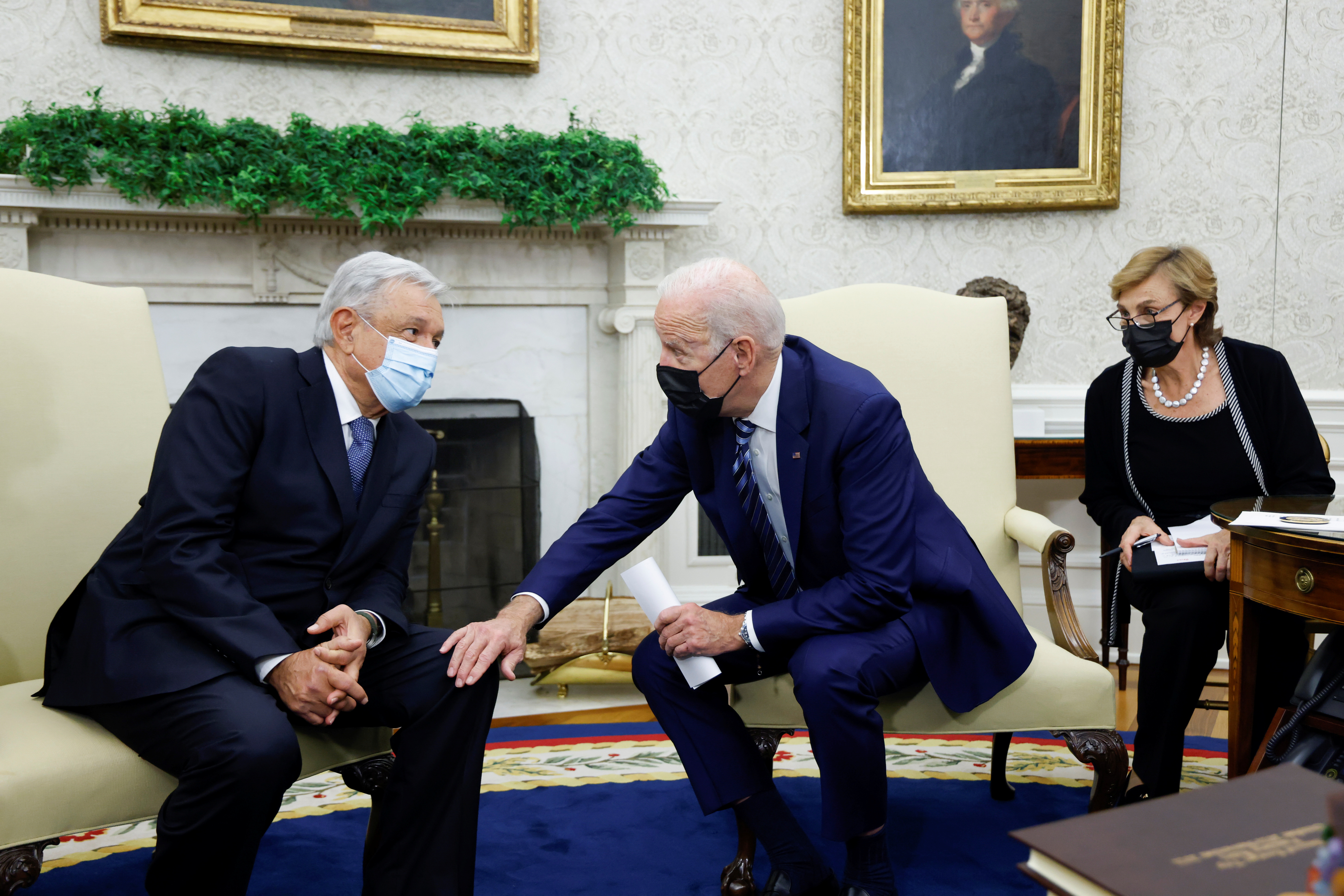 Mexican President Andrés Manuel López Obrador asked Joe Biden in Washington on Thursday to promote immigration reform in the United States, which will allow the regularization of 11 million undocumented Mexicans. “We are going to propose, with great respect, that we celebrate that you have sent the initiative to Congress to regulate immigrants and that I hope the legislators support it, because it is fair (…). There is no better initiative than that in the immigration field. We are going to be observing this process, ”the Mexican president announced to Vice President Kamala Harris minutes before meeting with Biden. Already during his bilateral meeting with the Democrat, he stressed that it is an initiative that “benefits millions of Mexican migrants who live and work honestly in the United States.” “It is an initiative to do justice,” emphasized López Obrador, abounding in the idea repeated this week that he believes that the time has come for the Mexican community (made up of 38 million people) to pressure senators and congressmen to the the way the four million Cuban-Americans do it, with undoubted success.

López Obrador, who at the beginning of June met with Harris during the vice president’s visit to Mexico and had done so virtually with Biden at the end of February, is in the United States to attend together with the Prime Minister of Canada, Justin Trudeau, to the North American Leaders Summit (CLAN), known colloquially as the Three Friends, convened by President Biden. It is the first time in five years that this meeting has been held, created in 2005 on an annual basis, and that Donald Trump systematically torpedoed.

With this gesture, and after his recent trips to Europe and the climate change summit in Glasgow, Biden continues in his efforts to rebuild the web of international relations that Trump left reduced to rubble. It also aims to send a message of regional unity in the face of the trade challenges posed by China and, to a lesser extent, Europe. The special relationship between the three countries has become more relevant in light of the global shortage crisis.

The day has started for López Obrador with a face-to-face meeting with the Canadian prime minister, in which they have discussed deepening economic and security integration between the two countries. The fight against inequality, one of the central axes of the Mexican president’s political project, and commercial cooperation have marked that first meeting, which has continued with bilateral meetings with the US vice president and with Biden. The program culminated with the meeting between the three friends. The topics on the agenda were the management of the exit from the pandemic, climate change, the situation in Cuba, the shortage crisis, electricity reforms, defense and, most pressing of all, immigration.

On that trilateral, White House officials who spoke on Wednesday on condition of anonymity, were sure on Wednesday that agreements would be reached on the exchange of vaccines with the poorest countries in Latin America and the Caribbean. They also took for granted a pact to reduce methane emissions in the oil and gas industries by up to 75% by 2030.

In the morning, Biden met Trudeau. Asked by the press about the possible diplomatic boycott of the Beijing Winter Olympics, which is scheduled to take place in February 2022, Biden said it was “something that is being considered.”

“We are peoples, sister nations that are very close, we belong to North America and we have many things in common and, most importantly, a very good relationship of cooperation and friendship,” later emphasized López Obrador, who, while waiting for the Canadian leader at the Mexican Cultural Institute in Washington, has appeared on the balcony to greet a group of compatriots. But it has been his counterpart who has placed special emphasis on other issues that, he said, unite the agendas of Mexico and Canada. “Indigenous peoples, women’s leadership and the fact that we are great allies,” said Trudeau.

The two rulers have precisely agreed to deepen their support for young people, women and indigenous communities of both countries under the umbrella of the T-MEC treaty, which regulates trade relations between Mexico, the United States and Canada and which is also one of the big themes of this summit. “The Mexican president and the Canadian prime minister emphasized that prosperity must be the result of actions that guarantee the equality, security and development of both peoples and the region as a whole,” reported the Ministry of Foreign Relations.

Based on these coincidences, López Obrador proposed to continue working “closely”, including deepening the dialogue between the governments and communities of Mexico and Canada “in order to share experiences and successful perspectives.” The fight against inequality through more just wealth redistribution measures has marked another central coincidence between the two leaders, according to the Mexican government. The president reiterated his commitment to “a global system that guarantees equity and inclusion, in accordance with the World Plan for Fraternity and Well-being that he submitted to the United Nations Security Council for consideration” last week. The main objective is to support around 750 million people living in poverty in the world.