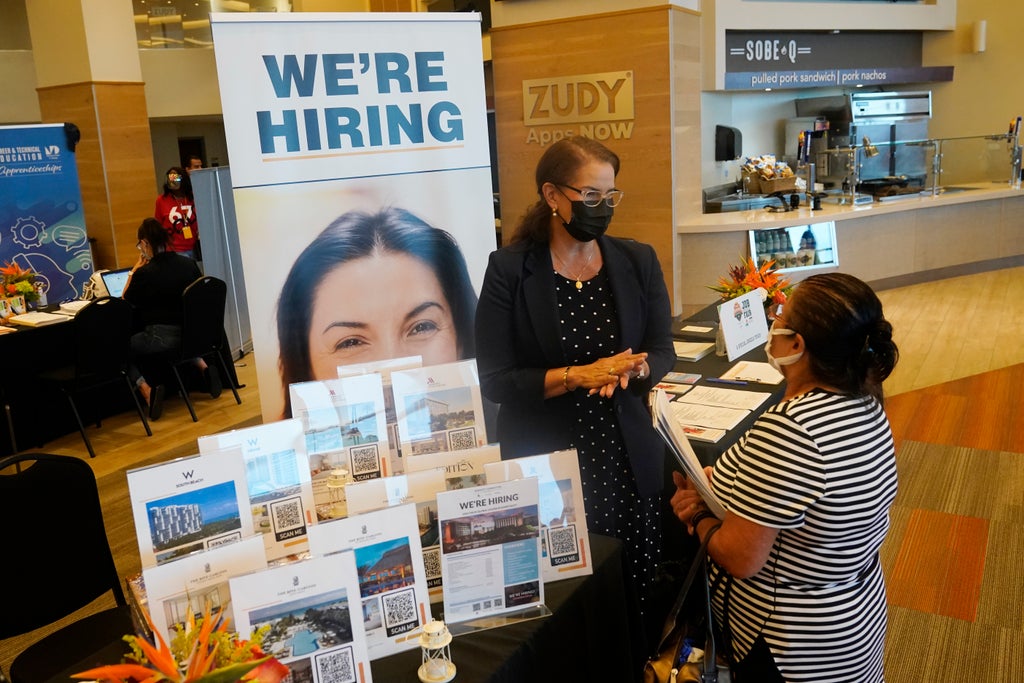 Last month’s huge wave of omicron infections is thought to have weakened hiring in January, though the pullback is considered all but sure to provide a temporary one.

Economists have forecast that the Labor Department will report Friday that employers added just 170,000 jobs last month, according to data provider FactSet. They expect the unemployment rate to remain unchanged at 3.9%.

If the forecast is accurate, January would mark the lowest monthly job gain in about a year. Some economists fear that the government’s report will show that the economy actually lost jobs last month, mostly because omicron infections forced so many workers to call in sick and stay home. In some cases, the government will count those absent workers as having lost jobs.

The COVID-19 surge also likely caused many workers to suspend their job searches, exacerbating a labor shortage that has kept many people on the sidelines of the workforce and led employers to raise pay to try to draw them back in. And with so many employees out sick, some companies likely suspended their hiring, even as employers overall have millions of jobs they want to fill.

Reported omicron infections peaked at above 800,000 a day during the second week of January — precisely the period when the government measured employment for the month. A dismal jobs figure would be a stark reminder that nearly two years after it began, the pandemic retains a tight grip on the economy.

Still, most economists expect a relatively quick rebound in hiring as soon as this month. Nationally, reported omicron infections are tumbling. And the overall outlook for the job market remains bright, with many businesses still desperate to hire: The number of job openings in late December reached nearly 11 million, just below a record set in July. The pace of layoffs and the unemployment rate are both near pre-pandemic lows.

Last month, a survey by the Census Bureau found that nearly 8.8 million people didn’t work in early January because they were either sick with COVID-19 or had to care for someone who was. That was more than triple the corresponding number in early December. A majority of those workers likely benefited from employer-paid sick leave, and their staying home would not have affected the job count.

But about one-fifth of workers — particularly lower-paid service employees, who are most likely to contract the virus — have no paid leave. If they missed a full pay period for sickness, their jobs would be counted as lost for the month, even though they were still employed. That would shrink the government’s job count for January.

The Labor Department uses a different method to calculate the monthly unemployment rate. With this method, even workers who were home sick during the last month would be counted as employed if they have a job to return to.

The differences in the ways the numbers are calculated account for why even economists who expect a job loss for January also expect the unemployment rate to stay at 3.9% or perhaps even decline slightly.

Any hiring slowdown or job loss would come after the US gained more jobs last year, adjusted for the size of the workforce, than in any year since 1978. The unemployment rate fell by nearly 3 percentage points — from 6.7% to 3.9% — the sharpest yearly decline on records. Much of that improvement represented a rebound from record job losses in 2020, driven by the pandemic.

But the economy’s strong growth and hiring last year were accompanied by the highest inflation rate in four decades, spurred by brisk consumer spending on furniture, electronics, appliances and other goods. Snarled supply chains limited the availability of many items, forcing up prices. High inflation has wiped out many Americans’ pay gains.

Omicron infections are likely slowing the economy in the January-March quarter, particularly compared with the rapid expansion that occurred in the final three months of 2021, when it grew at a robust 6.9% annual rate. Some analysts have forecast that growth will weaken to an annual rate as low as 1% in the first three months of this year.

One reason for the slowdown: Americans cut their spending in January as the spread of the coronavirus discouraged some people from eating out, traveling and going to movies and other entertainment venues.

Yet as omicron fades, there are signs that consumers are ready to spend again. Auto sales jumped in January after several months of declines. Carmakers have been able to slowly ramp up production. And Americans’ incomes rose at a solid pace last month, providing fuel for future spending.