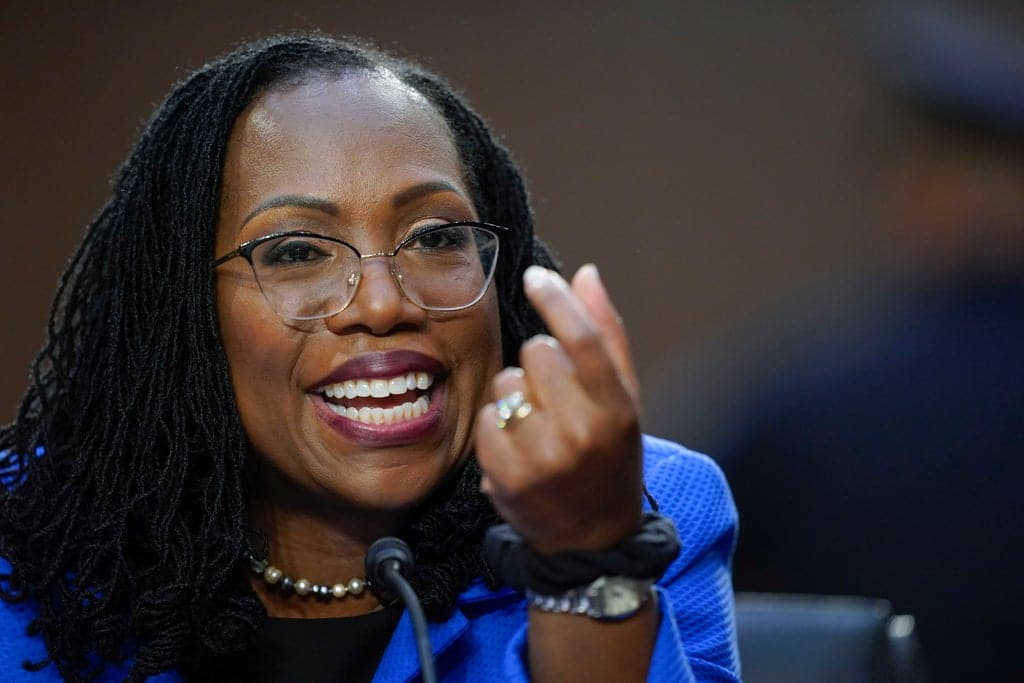 Empathy is not a quality many Republican senators want to see in the next Supreme Court justice.

Traditionally considered an admirable attribute, the ability to empathize with another’s plight has become a touchstone for GOP opposition to Judge Ketanji Brown Jackson.

The first Black woman nominated to become a justice, Jackson brings a lifetime of experience never seen before on the high court, which has been filled almost exclusively by white men for most of its 233-year history.

Perhaps nothing more dramatically captured Jackson’s landmark moment than the image of the 51-year-old Black judge, tears streaming down her cheek, as the only Black member of the Senate Judiciary Committee spoke of the “joy” her nomination brings to him and so many others.

But on the other side of the Senate, Republicans lining up to oppose the historic nomination are warning that Jackson carries too much empathy to the job.

Jackson, Republicans have argued, shows compassion for criminal defendants she represents as a lawyer, and they have questioned whether that compassion extends to victims. They say she sentences criminals — in particular, child pornography defendants — too leniently as a judge, despite fact checks of her record that show she’s largely in line with protocol in most cases. They worry Jackson’s empathy for her will cloud her judgment on the high court.

“It seems as though you’re a very kind person, and that there’s at least a level of empathy that enters into your treatment of a defendant that some could view as maybe beyond what some of us would be comfortable with,” said Sen. Thom Tillis, R.N.C.

Sen. Tom Cotton, R-Ark., said he was looking for a justice “who will make decisions based on the law, not based on personal experiences or preferences, not on empathy.”

It’s not the first time the concept of empathy has been wielded as a disqualifying weapon against a nominee for the high court. Nor is it the only time the empathy standard was applied to the women tapped for the bench, rather than the much longer list of men.

More than a decade ago, Republicans lodged similar arguments against another trailblazing minority woman nominated by a Democrat to the Supreme Court — Sonia Sotomayor, the first Latina justice, a Puerto Rican-American who grew up in the Bronx.

Barack Obama popularized the idea of ​​making empathy among the core criteria he was looking for when the newly elected president was seeking a nominee to replace the retiring Justice David Souter, himself among the more empathetic thinkers on the court.

At the time, Obama said he would seek “someone who understands that justice isn’t about some abstract legal theory or footnote in a case book. It is also about how our laws affect the daily realities of people’s lives.”

“I view that quality of empathy, of understanding and identifying with people’s hopes and struggles, as an essential ingredient for arriving at just decisions and outcomes,” Obama said.

It was May 2009, and Obama’s young White House was just taking shape. Soon the qualities the first Black president sought for a Supreme Court justice became what’s now referred to as the “empathy standard.”

In nominating the Yale-educated Sotomayor, Obama said her mastery of the law and ability to render impartial justice were not enough. “We need something more,” he said.

For this, Obama drew from the former Supreme Court Justice Oliver Wendell Holmes, who he quoted as saying, “The life of the law has not been logic; it has been experience.”

What started as lofty goals and a nod to history, the “empathy standard” swiftly transformed into conservative legal catchphrase for liberal judges.

Months later at Sotomayor’s confirmation hearing, the top Republican on the Senate Judiciary Committee, the conservative Sen. Jeff Sessions of Alabama, warned of the slippery slope of confirming justices based on the empathy standard.

“I am afraid our system will only be further corrupted, I have to say, as a result of President Obama’s views that, in tough cases, the critical ingredient for a judge is the ‘depth and breadth of one’s empathy,’” said Sessions , who would go on to become former President Donald Trump’s first attorney general.

“I fear that this ’empathy standard’ is another step down the road to a liberal activist,” he said.

This past week, Jackson testified at her Senate Judiciary Committee hearing, fielding more than 20 hours of questions from senators about her views, her record and approach to the law.

The mother of two told senators she doesn’t hold to a particular judicial philosophy but rather a method for scrutinizing cases, striving to keep a neutral approach and “stay in my lane” as a judge rather than veering into policy making.

Democratic Sen. Dianne Feinstein of California said she has “a real sense of empathy.”

The American Bar Association’s standing committee on the federal judiciary gave its highest rating, “well qualified.” The Fraternal Order of Police, the large law enforcement group, said she has “earned this.”

Since its founding in 1789, the Supreme Court has had just two Black justices — the late Thurgood Marshall, the storied civil rights leader, confirmed in 1967, and Clarence Thomas, who joined in 1991.

Inside the Senate committee room was a tense if sometimes celebratory atmosphere, with civil rights leaders in attendance marking the milestone.

At one point, after Jackson had wiped away her tears, the youngest senator, Jon Ossoff, D-Ga., told Jackson there are “millions and millions of people who are watching and cheering you on right at this very moment.”

Around the world, he said, people are “seeing what is possible in America.”

Jackson has worked in public and private practice, and has been confirmed by the Senate three times before — as a federal judge, on the US sentencing commission and in her current job on the appellate court.

In the 50-50 Senate, it is no longer necessary to muster broad support for Supreme Court nominees, after a Trump-era rules change that allows for confirmation with 51 votes.

Democrats have the slim majority with Vice President Kamala Harris able to break a tie, and are on track to confirm Biden’s pick by time senators leave for a scheduled spring recess April 8, even if all Republicans are opposed.

Senate Republican leader Mitch McConnell announced after the hearings he would oppose Jackson’s nomination, setting the tone for the other GOP senators to follow.

McConnell had laid out his concerns days earlier: “If any judicial nominee really does have special empathy for some parties over others, that’s not an asset. It’s a problem.”