Manchester City returned to the top of the Premier League table after a brief hiatus with a 2-0 victory at Burnley.

Liverpool’s 2-0 win at home to Watford in the day’s early kick off had seen the Merseysiders move two points clear of City for a few hours, but our result at Turf Moor sees us move a point clear ahead of next week’s showdown between the two sides at the Etihad.

City got off to a flyer and were ahead after five minutes when Kevin De Bruyne volleyed home from inside the area after Raheem Sterling’s cushioned pass.

It was a brilliant finish and a beautifully constructed move – a signal of City’s intent on what felt like a significant day in the race for the Premier League title.

Our second was equally as impressive and Sterling was again the architect. The England forward played a one-two with De Bruyne, raced clear down the right past Charlie Taylor and delivered the perfect cross to find Ilkay Gundogan, who finished first time with aplomb.

Gundogan is now the most prolific German in Premier League history, with 34 goals in the competition.

City were playing with a swagger, enjoying long periods of keep-ball. It was slick, one- and two-touch passing. Burnley were struggling to cope.

The second half saw a similar pattern of play, with City in cruise control and, at times, almost toying with their opponents.

Substitute Gabriel Jesus hit the post and then put the rebound wide late on as City went in search of a third, before the Brazilian miscued moments later with a powerful low drive.

City’s dominance could perhaps be summed up by Ederson’s confident take and sidewinder cross-field pass in the closing stages.

23 – Man City are the only side yet to drop a single point from a winning position in the Premier League this season, winning all 23 games in which they’ve led. No side has ever gone through an entire Premier League campaign without dropping points when ahead before. Pacesetters. pic.twitter.com/TBSWhcSgyt

This was a superb display from City, who completely controlled proceedings at Turf Moor.

The home side set up with a 4-5-1 formation in a bid to frustrate us. But such was the speed and quality of our passing, we completely outplayed Burnley in one of the most one-sided performances we’ve produced all season, particularly in the first 45 minutes.

And it wasn’t just our ability to keep the ball that impressed – the quality of our goals were also exceptional.

When City are as ruthless as this in the final third, there’s little the opposition can do to stop us. 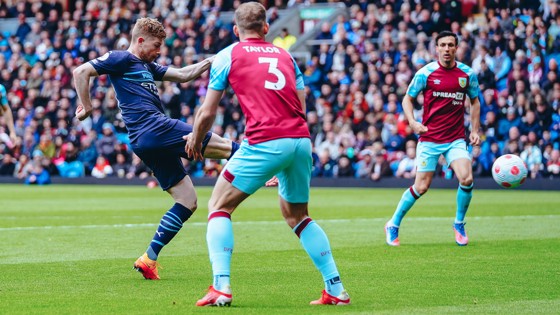 Liverpool’s win in the early kick off saw them leapfrog us, meaning failure to win this game would have meant City ending the day off top spot for the first time since December 3..

Make no mistake, it was a pressure situation, but City handled it expertly.

Our players looked cool and calm throughout, and the result was never in doubt.

Two assists and a constant threat, Raheem Sterling was outstanding in this one.

Playing predominantly on the right, he was a constant attacking threat.

Charlie Taylor will be glad to see the back of him.

This was the City defender’s 100th Premier League appearance and our victory takes the total number of points he has collected in that period to 254 – more than any other player has managed in their first 100 games in the competition.

It was also a significant day for Kevin De Bruyne, too, as he made his 200th Premier League appearance.

And Ilkay Gundogan scored his 34th Premier League goal, meaning he is now the highest scoring German player in the competition’s history.

“We came here to win the game and we did it. You never know what’s going to happen after an international break. The pitch was difficult because the grass was so high but we adapted.

“The goal after five minutes was important but we still had to play 85 more. In the 2nd half they pushed more, they went 4-4-2 and they were more aggressive. It was made more complicated by the fact we couldn’t score the third goal.

The win means City go back to the top of the Premier League table after a brief period in second.

Liverpool’s win at home to Watford in today’s early kick off – their 10th consecutive league success – had seen Jurgen Klopp’s side move ahead of us in what is proving to be a tense title race.

It was an unusual feeling for City to have come from behind having led the Premier League table since early December, but it’s job done.

In short, a hugely significant period of football awaits.

On Tuesday, we host Atletico in the first leg of our UEFA Champions League quarter-final tie. That game kicks off at 20:00 (UK)

And then on Sunday 10 April, we welcome Liverpool to the Etihad for what many are calling a title decider. That one gets going at 16:30 (UK).

We will have full coverage of both matches on the official Man City app.

Manchester City returned to the top of the Premier League table after a brief hiatus with a 2-0 victory at Burnley. Watch more.

‘We must live with the pressure’ says Guardiola

Pep Guardiola says his players must feel the pressure in order to focus on the Premier League title. Read more.

Enjoy the full 90 minutes of City’s return to Premier League action away at Burnley on CITY+ Watch more.