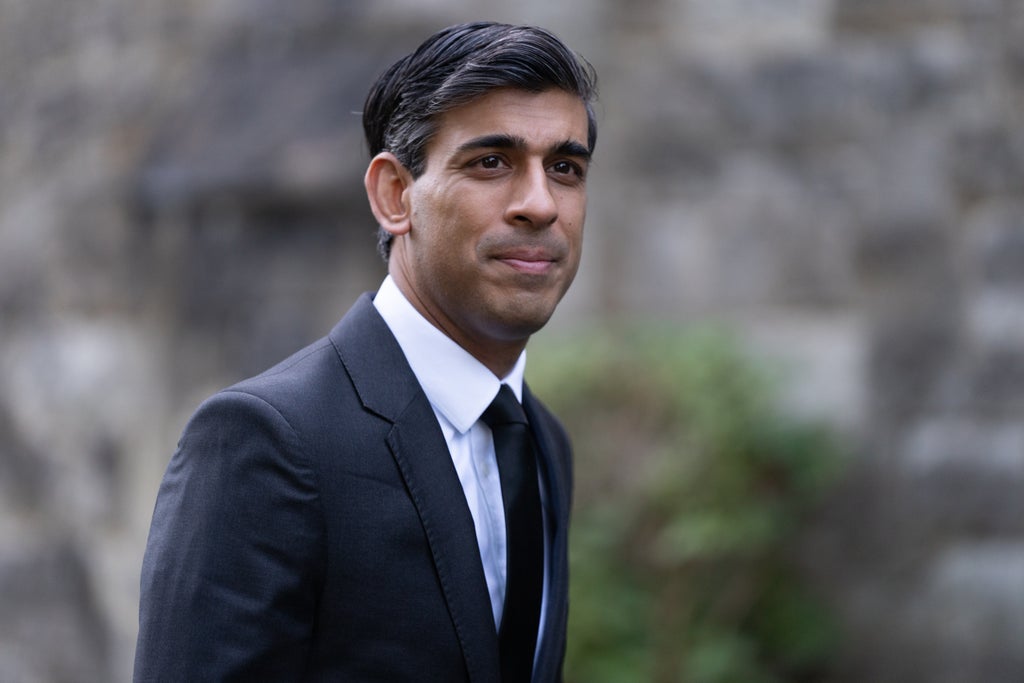 Rishi Sunak met with dozens of financial firms and banking industry lobby groups before seeking a “bonfire” of regulations for the City of London, analysis has shown.

The chancellor, who is reported to be putting the finishing touches to his Tory leadership campaign, is set to relax regulations and tear up rules, including some measures aimed at preventing future financial crises.

The government said on Monday that it wanted to “repeal a significant volume” of EU law relating to financial services as one of its key “Benefits of Brexit”. The Treasury said it would reform regulation to promote “international competitiveness” and overhaul stock market rules to win more business from financial hubs like New York.

Mr Sunak has also said that he wants the City watchdog to act as a cheerleader for the industry it is meant to regulate.

Last week, Treasury sources briefed the chancellor wanted to push a host of relaxations including reducing the buffer of capital that insurers must hold to protect them from collapse.

Experts said it was “extremely concerning” that Mr Sunak appeared to have consulted almost exclusively with financial sector interests to discuss post-Brexit regulation of the industry.

The chancellor, a former investment banker and hedge fund manager, is thought to be keen to keep the City onside amid speculation that partygate may soon end Boris Johnson’s reign as prime minister.

Analysis by The Independent of new transparency data shows that Mr Sunak met with dozens of banks, insurers and financial services lobby groups in the weeks after he first indicated his ambition to “streamline” rules for the City in July last year.

Almost 80 per cent of the businesses who met with the chancellor between July and September (the latest figures available) were from the financial services sector, an industry that represents just 8 per cent of the UK economy.

The proportion is higher than his predecessor, Sajid Javid (60 per cent), and substantially higher than the previous chancellor Philip Hammond (48 per cent).

Of 74 organizations that secured an audience with Mr Sunak, 57 were banks, insurers, fund managers, financial technology firms or lobbying groups of those sectors. The chancellor did not meet any non-governmental organisations, think tanks or independent experts focused on financial services regulation.

Earlier meeting logs show that the chancellor met with five businesses after his Budget in March to discuss the announcement’s implications. All of those companies were banks: Morgan Stanley, Barclays, JP Morgan, Citigroup and Mr Sunak’s former employer, Goldman Sachs.

Sue Hawley, of Spotlight on Corruption, said the findings were “incredibly concerning”.

“It cuts straight to the heart of how unfair and unequal lobbying is in this country,” she said.

“These proposals to tear up EU regulations in one go are going to have long-term consequences for the UK as a society, as well as an economy. The government must work to protect the public good and not just make new rules that favor wealthy financial companies.”

Ms Hawley pointed out that the government’s own review of lobbying on financial issues, the Boardman report, called for much more ‘equal access’ to decision-makers to ensure decision-making isn’t captured by particular private interest groups.

Steve Goodrich, head of research at Transparency International UK, said: “Lobbying is a legitimate part of the democratic process, yet when ministers choose to only engage industry groups they are only hearing half the story – and one told by those with vested interests at play.

“Inclusive policy-making involves engaging a range of voices in genuine discussion, not just those who you think will support your views.”

As the UK gears up for financial sanctions against Russia over Vladimir Putin’s military aggression in Ukraine, the City of London is under intensifying scrutiny of its role as a hub for laundering dirty money.

Treasury minister Lord Agnew sensationally resigned in anger at the government’s failure to tackle fraud and crack down on a torrent of illicit cash flowing through London’s banks.

Lord Agnew decried the Treasury’s decision to drop the proposed Economic Crime Bill – which would have toughened rules on the City – from the next Queen’s Speech. Instead of a crackdown, the speech is now expected to include a further wave of deregulation. The prime minister later backtracked, insisting the Economic Crime Bill had not been axed.

While the Treasury would be expected to meet with an industry it oversees regulation of, its close relationship with the financial services industry has drawn criticism.

Since 2008, the City has had its own dedicated minister, a position now held by John Glen, who is widely seen as friendly to the sector’s interests.

According to the financial services-focused newspaper City AM, “Glen has become a well-recognized figure around the Square Mile, and has become well-liked by City grandees.”

A number of recent chancellors have also had strong links to the banking industry. Mr Sunak worked at Goldman Sachs and investment fund TCI, which made huge profits during the financial crisis.

His predecessor as chancellor, Sajid Javid, was in charge of a team at Deutsche Bank until 2009 selling financial products known as collateralised debt obligations (CDOs) which became infamous for worsening the severity of the crash.

Six months after stepping down as chancellor in February 2020, Mr Javid took a part-time job at the investment bank where he had started his career, JP Morgan. Mr Javid was paid £150,000 for between 80 and 96 hours a year while he was still working as an MP.

George Osborne, chancellor between 2010 and 2016, took lucrative roles at BlackRock and boutique investment bank Robey Warhaw after leaving the Treasury.

A Treasury spokesperson said: “We are delivering on our roadmap for keeping the City at the top table now we have left the EU by making it more open, more competitive, more technologically advanced, and more sustainable.”