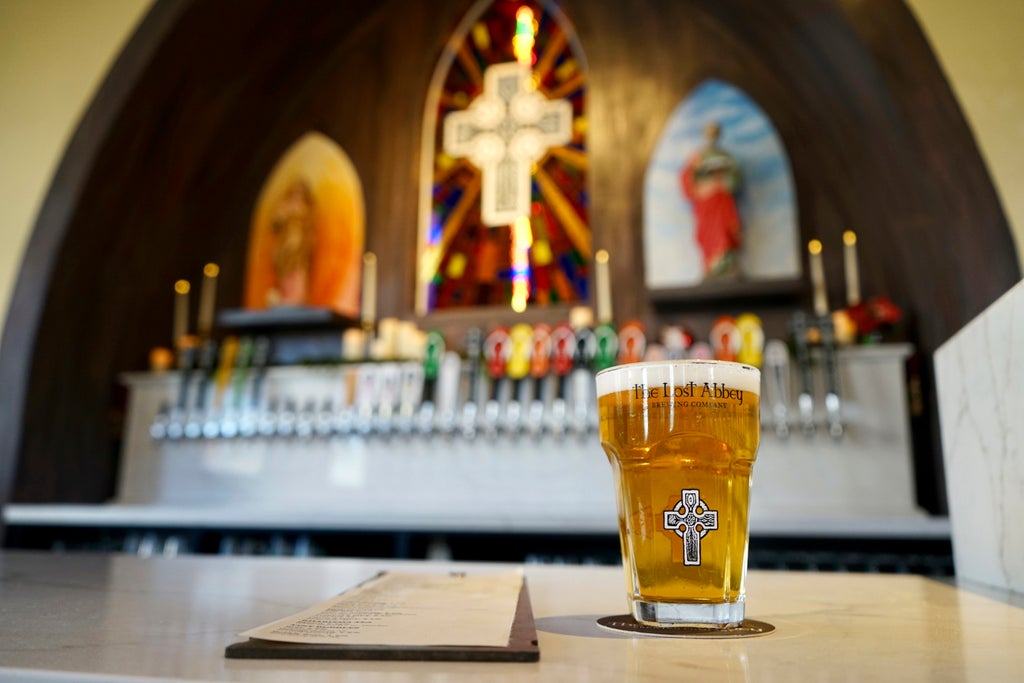 Bruce Lindsay never expected to own a church. But when his mother died shortly before the pandemic, he wanted to use his inheritance from him to do something extraordinary.

“My mother, if she were alive today, I think I would have a great chuckle at what I’ve purchased,” said Lindsay. “I found myself surrounded by a church when it was the last place on earth I wanted to go to as a kid.”

In August, after purchasing a 900-square-foot-Methodist church built in 1876, Lindsay and his business partner, Anna Cronin, opened Dirt Church Brewing Co. in East Haven, Vermont It’s one of at least eight church breweries that have opened in the US since 2020.

This content is written and produced by Religion News Service and distributed by The Associated Press. RNS and AP partner on some religion news content. RNS is solely responsible for this story.

Today, the US has roughly 30 breweries based in once-vacant churches. Though some church breweries have faced pushback for offering suds in a once sacred space, the move has precedent. Monks have been brewing beer in monasteries for centuries, offering it to visitors and often imbibing it themselves at a time when it was safer to drink beer than water.

Dirt Church Brewing Co. originally intended to open a brewery inside the church, but Cronin and Lindsay found it lacked running water, a septic tank and heat. Rather than tearing open the building to add the required services, they built the taproom next door, where the town’s former meetinghouse once stood. The church, now used as an art gallery and event space, remains integral to the brewery’s identity.

The name “dirt church” is both a nod to the 19th-century building as well as lingo used by the cycling community that Lindsay and Cronin belong to. “It’s kind of our little cheeky nickname for the Sunday morning long ride that was usually on mountain bikes or gravel bikes,” said Cronin. “Instead of going to ‘church-church,’ we would say, ‘Hey, are you going to dirt church?’”

Today, the brewery hosts “dirt church” for its patrons once a month via Sunday bike rides, runs or hikes — followed by a few celebratory beers at the taproom, of course.

Across the country in San Diego, The Lost Abbey brewing company opened a new location in December inside the shell of a Mexican Presbyterian church built in 1906. The brewery added pews, chandeliers, tapestries and even stained-glass windows to accentuate its slightly irreverent brand .

“This building fell into massive disrepair and probably would have been demolished were it not for the developers that saved it,” said Tomme Arthur, co-founder of The Lost Abbey. This is the brewery’s first location in a former house of worship.

The Lost Abbey was founded in 2006 to offer beers inspired by Belgian monastic brewing traditions, as well as some “nondenominational” beers brewed in no particular style. Per the company’s slogan, it offers brews to “sinners and saints alike” — a motto it’s embraced wholeheartedly.

The new location, appropriately dubbed “The Church,” is split into two sides, one for sinners and one for saints. The sections are marked by corresponding décor: A St. Peter statue presides over the saints area, and Mary Magdalene — who is often misidentified as a prostitute — occupies the sinners side.

The Lost Abbey’s beers play off of similar tropes, with “saintly” names such as “10 Commandments” or “Gift of the Magi” juxtaposed with names like “Judgment Day” or “Serpent’s Stout.” The next addition will be a beer featuring Baby Moses, a wink at the popular “Mandalorian” character Baby Yoda.

“We’ve always taken our beers more seriously than a lot of other things,” said Arthur, who grew up attending Catholic school. “What’s great is that every time that we need some sort of inspiration, we’re able to open up the Bible.”

The Ministry of Brewing, located in what was once St. Michael the Archangel Church in Baltimore, makes it a point to avoid religious themes in its marketing.

“All of our names of our beers are typically Baltimore references or something about the neighborhood,” said Jon Holley, the brewery’s general manager. “As far as religious terms, imagery, things like that, we already know that being in a church is a sensitive thing for a lot of people, so we’re not trying to touch that at all.”

The church was built in 1857 and was home to a German Catholic congregation and, later, a Spanish-speaking congregation before closing due to the cost of upkeep. In 2018, the Ministry of Brewing began a full renovation to preserve and restore many of the original elements of the building, which is on the National Register of Historic Places.

The church reopened to the public as a brewery in January 2020, featuring a dazzling interior with soaring columns and a mural-painted barrel ceiling. The brewery also hosts events, fundraisers and even local delegate debates.

Though Holley said he “half expected” pushback for residing in a historic church, the brewery has received overwhelming support. Most often, he said, patrons can be found enjoying the brewery’s bestselling hazy pale ale called “Wispy,” a reference to wispy stained glass.

Like the other two breweries, Dirt Church Brewing Co. in Vermont is intentional about its beer names. Its flagship beer? It’s named “Rejoice,” after Lindsay’s mother, Joyce.

“It’s our most popular beer,” Lindsay said. “Without my mother’s help, none of this would exist today.”