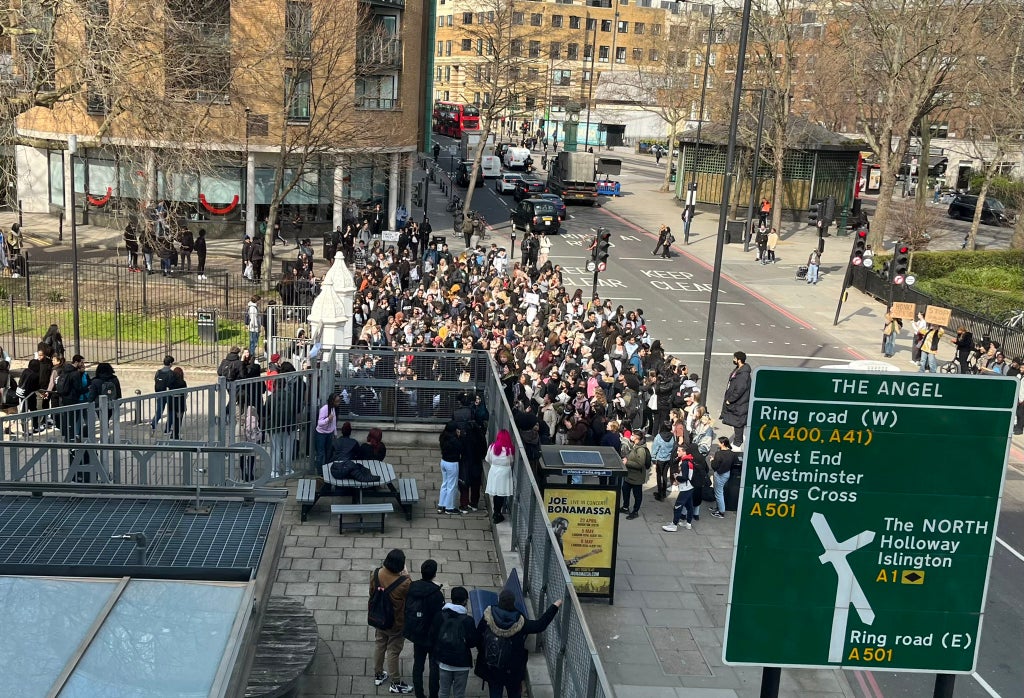 Hundreds of students at a college in London staged a walk-out over “intrusive” security checks taking place on campus.

Up to 200 pupils at City and Islington College in north London walked out on Monday over checks the college says it introduced due to rising knife crime rates and violence in the capital.

Pictures and videos of the protest have since circulated on social media, featuring large crowds of students chanting “stop the search”.

Hazel, 16, a student at the college described the security checks as “extremely intrusive” and in disregard of pupil privacy. She said: “It makes me feel uncomfortable knowing I have personal things in my bag and it’s very immoral for the school to suspect that all pupils hold weapons in their bags. It’s not okay for them to feel like they can just go through our belongings.”

“There has always been knife crime in London,” she added, “so it’s silly to bring searches in now and unless it’s a compulsory law to everyone, I don’t think the college should just decide they feel like executing them from time to time. time.”

Another student, 16-year-old Tomas, said: “The college doesn’t feel like a place to learn, we are presented and treated as criminals. I’m scared for myself and especially my Black friends as this can lead up to a Child Q situation, which is why I disagree with the stop and search.”

In March, it emerged that a Black teenager from Hackney, east London, dubbed ‘Child Q’, was strip-searched by Metropolitan Police officers in school, while on her period, after a false accusation of drug possession.

Tomas added: “I am disgusted that they don’t take proper action when children are really in danger and instead, put innocent students in fear when there isn’t an actual reason behind it. I am disgusted that they used knife crime as an excuse, especially in a place like Islington. I am from Haringey and a lot of teens, like myself, have suffered from knife-crime and it’s super weird how they used it as an excuse.”

Kim, 16, also shared similar views as her classmates. She said: “Students haven’t done anything to provoke this new policy, so these administrators and such are just making us, who are mostly Bame, feel inferior and invaded.

“It frustrates me, all it’s done is disturb my learning by causing me to be late to classes. Nobody should have to queue and have their belongings searched. It’s a college, not a secure prison, we’re supposed to feel safe,” she added.

A teacher at the college, who wishes to remain anonymous, shared their concerns about the searches.

They said: “I’ve worked at the college for many years and we’ve never had a knife-related incident. People have felt very safe here, and whilst there’s been trouble on the streets outside of the campus, we’ve never had an issue within the college. As a consequence of a knife-related incident at another college, our students are now subject to checks and feel like their privacy is being intruded. The college no longer feels like their home.”

“When the checks were announced, staff implored them with management for them to not be carried out and even protested at the gates, but they went ahead anyway,” they said. “Now, students have made their voices clear but the managers are not listening, so I imagine there will be continued protests until the management listens.”

“The vast majority, if not all of the students, are opposed to the checks, so why should they continue?”

In response to the protest, the college released a statement on Twitter saying the allegations of ‘stop and search’ style checks are false and that most students are in favor of increased security.

Kurt Hintz, the college’s chief executive, said: “The checks have been introduced because, tragically, knife crime is again on the rise in London, and there have been incidents resulting in injury or death of young people, including students of our colleges in London.

“As one of London’s largest sixth form colleges,” he continued, “our duty is not only to educate and inspire our students, but to do whatever we can to keep them safe with they are in our care.”

Regarding the security checks, the college said they are sporadic, random and non-invasive for students and aim to act as a deterrent for any pupil thinking of carrying a weapon on campus.

Mr Hintz added: “We’ve surveyed students in February and of the 987 who responded, 623 (63 per cent) said that random security checks for knives at the entrance to the college made them feel safer.

“We are very sorry that some students have had a negative experience of being randomly selected and checked… It has never been our intention to make anyone feel victimized, which is why the checks are completely random.

“Unfortunately, the grim reality is that young people in London are now far more exposed to violence, and the threat of violence in their everyday lives… this is why we are carrying out the additional security checks.”