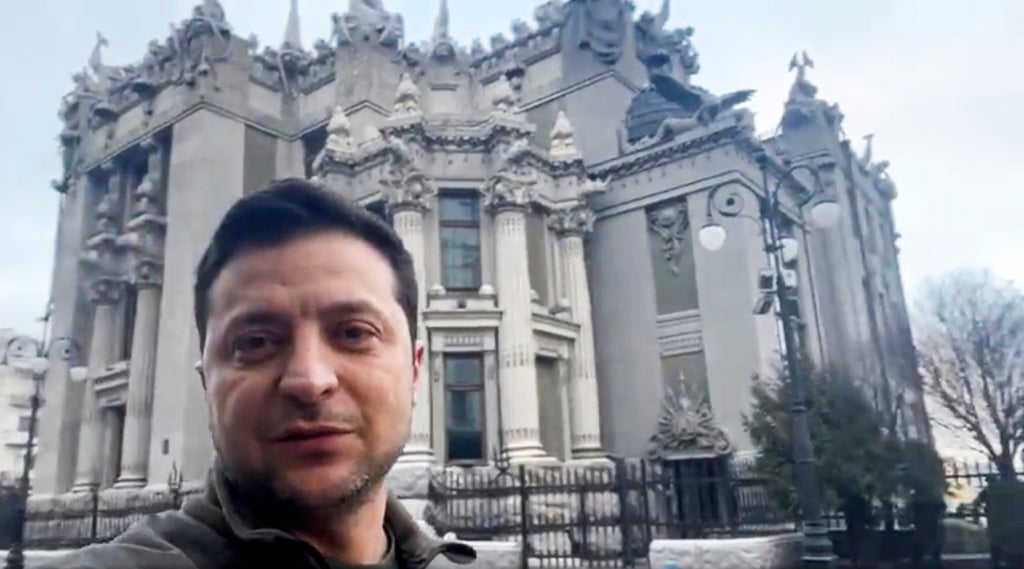 Russian troops stormed toward Ukraine’s capital Saturday, and street fighting broke out as city officials urged residents to take shelter. The country’s president refused an American offer to evacuate, insisting that he would stay. “The fight is here,” he said.

As dawn broke in Kyiv, it was not immediately clear how far the soldiers had advanced. Ukrainian officials reported some success in fending off assaults, but fighting persisted near the capital. Skirmishes reported on the edge of the city suggested that small Russian units were probing Ukrainian defenses to clear a path for the main forces.

The swift movement of the troops after less than three days of fighting further imperiled a country clinging to independence in the face of a broad Russian assault, which threatened to topple Ukraine’s democratic government and scramble the post-Cold War world order.

Ukrainian President Volodymyr Zelenskyy offered renewed assurance Saturday that the country’s military would stand up to the Russian invasion. In a video recorded on a downtown Kyiv street, he said he had not left the city and that claims the Ukrainian military would put down arms were false.

“We aren’t going to lay down weapons. We will protect the country,” the Ukrainian president said. “Our weapon is our truth, and our truth is that it’s our land, our country, our children. And we will defend all of that.”

US officials believe Russian President Vladimir Putin is determined to overthrow Ukraine’s government and replace it with a regime of his own. The invasion represented Putin’s boldest effort yet to redraw the map of Europe and revive Moscow’s Cold War-era influence. It triggered new international efforts to end the invasion, including direct sanctions on Putin.

The Kremlin accepted Kyiv’s offer to hold talks, but it appeared to be an effort to squeeze concessions out of the embattled Zelenskyy instead of a gesture toward a diplomatic solution.

Zelenskyy was urged early Saturday to evacuate Kyiv at the behest of the US government but turned down the offer, according to a senior American intelligence official with direct knowledge of the conversation. The official quoted the president as saying that “the fight is here” and that he needed anti-tank ammunition but “not a ride.”

The official spoke on condition of anonymity because he was not authorized to speak to the media.

Saturday’s street clashes followed two days of massive air and missile strikes that Russian officials said targeted Ukrainian military facilities as their ground troops moved in from the north, east and south. The assault pummeled bridges, schools and apartment buildings, and resulted in hundreds of casualties.

“We’re all scared and worried. We don’t know what to do then, what’s going to happen in a few days,” said Lucy Vashaka, 20, a worker at a small Kyiv hotel.

But Zelenskyy adviser Mykhailo Podolyak said Ukrainian forces controlled the situation when the small Russian units tried to infiltrate Kyiv. City officials in Kyiv urged residents to seek shelter, to stay away from windows and to take precautions to avoid flying debris or bullets.

It was unclear in the fog of war how much of the Ukraine was still under Ukrainian control and how much Russian forces have seized. UN officials said millions of residents could flee Ukraine for neighboring countries in the West.

A second Russian military transport plane was shot down near Bila Tserkva, 50 miles (85 kilometers) south of Kyiv, according to two American officials with direct knowledge of conditions on the ground in Ukraine.

The Russian military did not comment on either plane.

The United States and other global powers moved to freeze the assets of Putin and his foreign minister Friday as part of tougher sanctions on Russia as the invasion reverberated through the world’s economy and energy supplies.

Sports leagues also sought to punish Russia, and even the popular Eurovision song contest banned Russian acts from the event’s May finals in Italy.

Through it all, Russia remained unbowed, vetoing a UN Security Council resolution demanding that it stop attacking Ukraine and withdraw troops immediately. The veto was expected, but the US and its supporters argued that the effort would highlight Moscow’s international isolation.

The 11-1 vote, with China, India and the United Arab Emirates abstaining, showed significant opposition to Russia’s invasion of its smaller, militarily weaker neighbor.

NATO, meanwhile, decided to send parts of the alliance’s response force to help protect member nations in the east for the first time. NATO did not say how many troops would be deployed but added that it would involve land, sea and air power.

It was unclear how many people overall had died in the largest ground war in Europe since World War II.

Ukrainian officials reported at least 137 deaths on their side from the first full day of fighting and claimed hundreds on the Russian one. Russian authorities released no casualty figures.

UN officials reported 25 civilian deaths, mostly from shelling and airstrikes, and said that 100,000 people were believed to have left their homes. They estimate that up to 4 million could flee if the fighting escalates.

Late Friday, US President Joe Biden signed a memo authorizing up to $350 million in additional security assistance to Ukraine, bringing the total security aid approved for Ukraine to $1 billion over the past year. It was not clear how quickly the aid would flow.

The assault was anticipated for weeks by the US and Western allies and denied to be in the works just as long by Putin. He argued that the West left him with no other choice by refusing to negotiate Russia’s security demands.

Putin has not disclosed his ultimate plans for Ukraine. Foreign Minister Sergey Lavrov gave a hint, saying, “We want to allow the Ukrainian people to determine their own fate.” Putin spokesman Dmitry Peskov said Russia recognizes Zelenskyy as the president, but would not say how long the Russian military operation could last.

Zelenskyy’s whereabouts were kept secret after he told European leaders in a call Thursday that he was Russia’s No. 1 target — and that they might not see him again alive. His office of him later released a video of him standing with senior aides outside the presidential office and saying that he and other government officials would stay in the capital.

Zelenskyy offered Friday to negotiate on a key Putin demand: that Ukraine declare itself neutral and abandon its ambition of joining NATO. The Kremlin said Kyiv initially agreed to have talks in Minsk, then said it would prefer Warsaw and later halted communications.