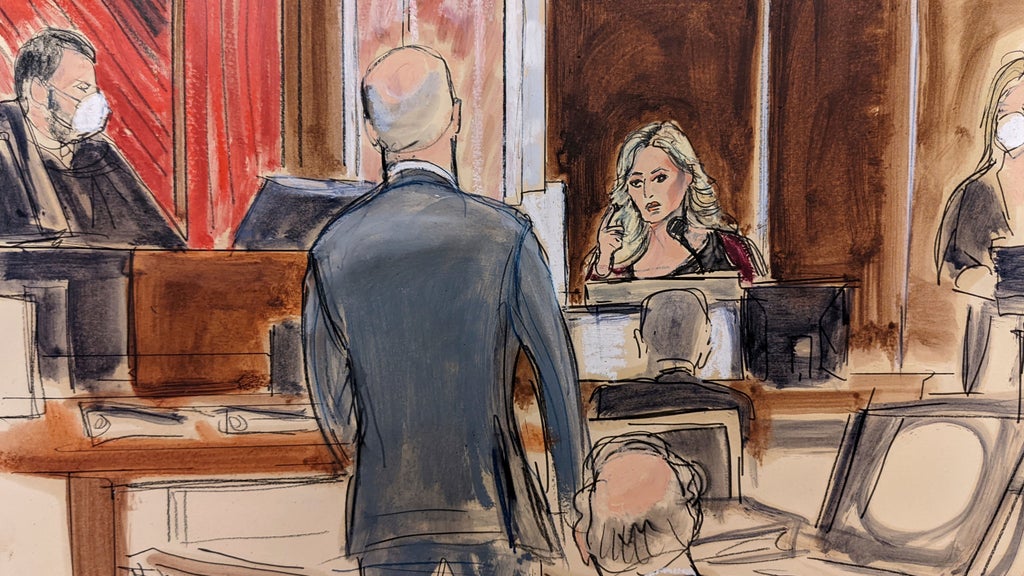 Stormy Daniels came face-to-face with her disgraced former lawyer Michael Avenatti for the first time in three years as she told a court how he lied to her “every day for five months” about pocketing nearly $300,000 from her book deal to prop up his failing law firm.

“He stole from me and lied to me,” Ms Daniels said during an opening except under questioning from the prosecution.

Mr Avenatti is on trial in Manhattan for wire fraud and aggravated identity theft charges over claims he stole from an $800,000 advance paid to Ms Daniels for her 2018 book Full Disclosure.

Ms Daniels said her former attorney strung her along for months while claiming to be chasing her publisher St Martin’s Press for the book advance.

Ms Daniels, real name Stephanie Clifford, began giving evidence on day three of the trial, after Mr Avenatti dramatically fired his legal team on the opening day over a disagreement on how to question witnesses.

Ms Daniels, 42, said she was introduced to Mr Avenatti in February 2018 as she was looking to break out of a non-disclosure agreement with former president Donald Trump.

Ms Daniels has maintained the pair had a sexual tryst with the former president in 2006, which he has denied.

She and Mr. Avenatti met at the Waldorf-Astoria in Beverly Hills in February 2018, and signed an attorney client fee contract over lunch the next day.

Ms Daniels said she paid Mr Avenatti an initial fee of $100 and agreed that he would set up a crowdfunded defense fund to raise money for the case.

The contract stated that Mr Avenatti was entitled to a “reasonable percentage” of her future earnings, but Ms Daniels said they never agreed that he would receive any money from a book deal.

Under the terms of the contract she received an initial payment of $250,000, and was to be paid a further amount of $175,000 upon delivery of the manuscript, another $175,000 within six months and $200,000 after six months, provided she completed media publicity obligations.

When she received the first wire payment after pulling into a gas station in Los Angeles, she said she screamed so loudly that she frightened her security detail.

“Got the wire. I can’t feel my face,” she texted Mr Avenatti.

He replied: “Congratulations. We make a good team. Enjoy.”

Ms Daniels recalled: “He told me that he would never take a penny from me from the book. He told me I had earned it.”

Ms Daniels began working with a ghost writer and delivered the book to her publishers in July.

Assistant US Attorney Robert Sobelman showed the jury the stream of text messages the pair exchanged between July and September in which Ms Daniels asks for an update on the payment.

Prosecutors allege Mr Avenatti had already taken the money and spent it on his own personal and business expenses, including exploring a run for president.

She initially suspected her literary agent Luke Janklow had taken the payment, and texted Mr Avenatti that she hoped he “choked” on the money he made from her.

Mr Avenatti had begun negotiating with the publishers about an audio version of the book, and suggested billions actor Maggie Siff could read it.

“Pretty annoying that they are all over us for something THEY need but still have not paid me despite final version being submitted a while ago,” she wrote back.

On 5 September, Mr Avenatti told her the publisher had mailed a cashier’s check for $148,750 to his office.

Ms Daniels said she was “confused and extremely irritated” why the check hadn’t been sent to her.

In a separate message Ms Daniels seemed frustrated that Mr Avenatti would be going on The Jimmy Kimmel Show with her after he had “talked mad s***” about the late night comedian to her.

She appeared alone on the show on 3 October to promote the book, and later asked Mr Avenatti if he had seen the show.

Prosecutors say Mr Avenatti had by this stage told Ms Daniels’ publisher and literary agent not to speak to her, and had received the third downpayment for the book.

Growing increasingly frustrated with her publisher, she told Mr Avenatti she couldn’t work out “why they are being dicks”. The book had made the New York Times bestsellers list, and her contract wasn’t dependent on book sales anyway, only that she made a certain number of publicity and media appearances.

In November 2018, she learned on social media that Mr Avenatti had set up a second crowd-funded legal defense fund without telling her.

His checks were bouncing, and his security team – dubbed the dragons – were not being paid.

At the time she was living with her ex-husband and needed the money to put a downpayment on a new home in Florida.

She told Mr Avenatti in a text: “I’m trapped in this house with my ex until I get paid. Each day is one step closer to one of us going to jail.”

By February, her third payment from the publisher was four months late, and the final one was almost due.

She says Mr Avenatti asked if she would accept a lump sum payment for less than the amount she had been promised in the contract.

“Hell no!” was her response from her. “Because we had an agreement and I felt like they had been jerking me around for so long, I had zero patience left.”

On February 14, the Los Angeles Times reported that Mr Avenatti’s firm Eagen Avenatti was accused by a former partner of hiding millions of dollars from the court that oversaw its bankruptcy.

Ms Daniels said she was swamped by reporters asking her about the news, and was sent a statement to give to the press that it was a “big nothing burger”.

She replied that he needed to “find my f***ing money”.

Several days later she was shown bank statements confirming that the payments had already been made into an account controlled by Mr Avenatti.

She said she was “beyond furious”.

“He lied to me almost every day for five months. I felt very betrayed and stupid.”

When she told Mr Avenatti she had retained new counsel and he was not to contact her again, he tried to fire her and suggested putting out a statement to the media suggesting they had parted amicably.

Mr Sobelman produced an August 2018 contract between Ms Daniels and her literary agent with her signature on it.

As Ms Daniels spoke from behind the perspex screen she would smile and glance at the jury, but became visibly angered when speaking about Mr Avenatti.

Mr Avenatti avoided looking at Ms Daniels and sat with his face down writing, regularly objecting to the government’s line of questioning.

Mr Avenatti had about five minutes to begin his cross-examination of Ms Daniels when Judge Jesse Furman announced the jury could be excused for the day. He will continue on Friday.