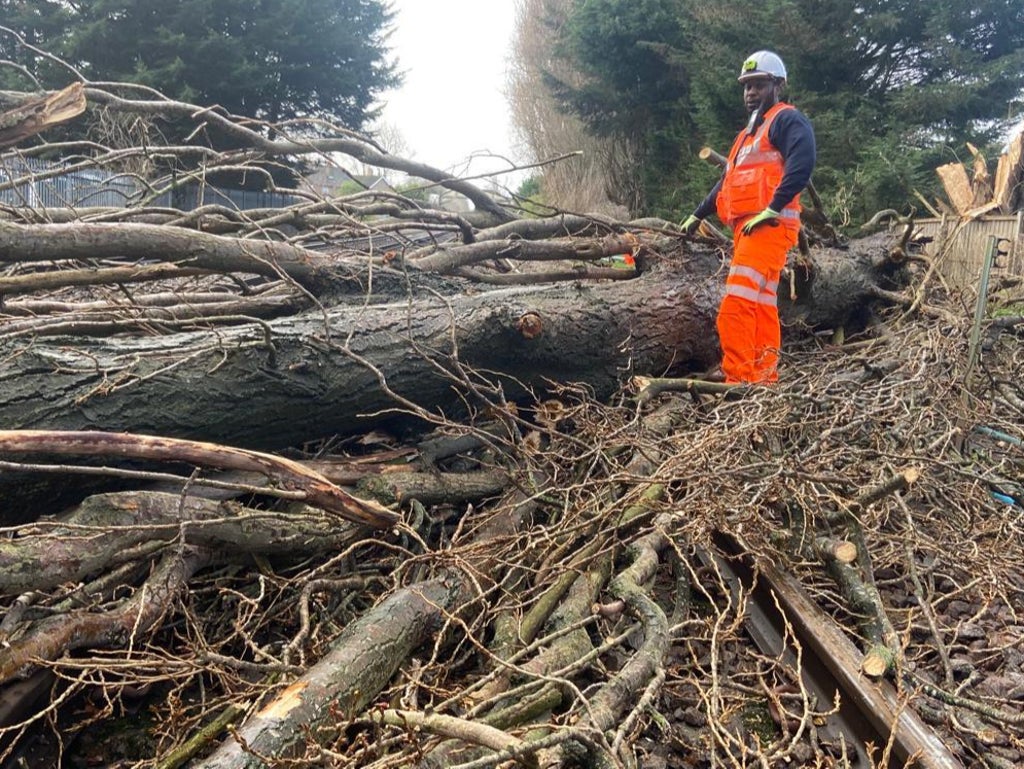 Travel disruption is set to continue this weekend amid the clean-up of severe damage caused by deadly Storm Eunice.

National Rail said that routes ‘across most of Great Britain’ will still be affected on Saturday and a number of train services will not be operating for the second day running.

Southern, Thameslink, and Great Northern networks have reissued “do not travel” notices, as some routes are not expected to reopen until Saturday afternoon.

The Caledonian Sleeper expects a normal service to resume on Sunday.

Meanwhile, CrossCountry Trains have asked passengers not to travel on Saturday due to the operator being unable to reinstate its usual timetable “following canceled strike action”.

Disruption for motorists also continues, following the storm that has killed three people in the UK – and one in Ireland – and severely injured a number of people.

The M48 Severn Bridge remains closed to all traffic and will not reopen until it is inspected on Saturday morning, a spokesman for the Severn crossings said.

The M4 Prince of Wales Bridge reopened on Friday afternoon.

It was believed to be the first time both crossings had been closed at the same time due to extremely strong tastes of wind.

In London, a number of lines are affected by closures and suspensions.

But the Transport for London (TfL) website does not make clear whether these disruptions are caused by effects of extreme weather, and it is common for some lines to be closed on the weekends for engineering works.

The Bakerloo, Northern, Overground, and TfL Rail lines are partly closed, as well as the tram network in Croydon, south London.

Metropolitan Line is part suspended between Amersham and Chalfont & Latimer, while the Waterloo & City line is closed until Monday morning.

On Friday, do not travel alerts were issued across England and Wales as seven operators suspended all services.

Also before the weekend, more than 430 flights that had been due to depart from, or arrive in, the UK were cancelled.

Hundreds of thousands of people have tuned into livestreams of plans attempting to battle the extreme winds to land at Heathrow airport on Friday.

Plane-spotter Jerry Dyer is behind the ‘Big Jet TV’ channel. In one of his livestreams of him, he is heard saying: “Right now, these conditions with 70mph and gusting winds it’s pretty intense and what’s great is you get to see the skill of the pilots and how they handle it.”

One aircraft was seen aborting the landing mission moments before its planned touchdown, as the winds put its stability in jeopardy.

Storm Eunice has been one of the worst in the UK since the ‘Great Storm’ of 1987.

The extent of the damage it caused was shown in footage and pictures shared on social media.

A long strip of roof covering was peeled off clean by the wind from a flat-topped building, and blown on to railway tracks at Banbury in Oxfordshire, to video shows.

Trees pulled out of the ground by the strong gusts have also fallen on railway lines, cars, and people’s homes.

Earlier, all railway routes in Kent were closed and every line in south-east London was blocked by fallen trees.

Preston train station also closed to passengers, with rail engineers inspecting sections of metal roof paneling that was blown off.

The Port of Dover announced it was closed “in the interests of customer and staff safety”, meaning no ferries could operate between Dover and Calais. Several sailings across the Irish Sea were also cancelled.

There were one-hour delays on the M25 due to the closure of the Queen Elizabeth II bridge, which is part of the Dartford Crossing.

The RAC said the number of call-outs to broken-down vehicles was lower than normal, indicating that many people were “taking the weather warnings seriously and not setting out”.

It added: “The fact many roads are so clear is a sign that today is not a safe day to be driving.”

Transport for London has urged people to avoid non-essential journeys in the capital.

As of Friday afternoon there were severe delays on to the District Line, Jubilee Line and Piccadilly line, while TfL Rail was suspended.