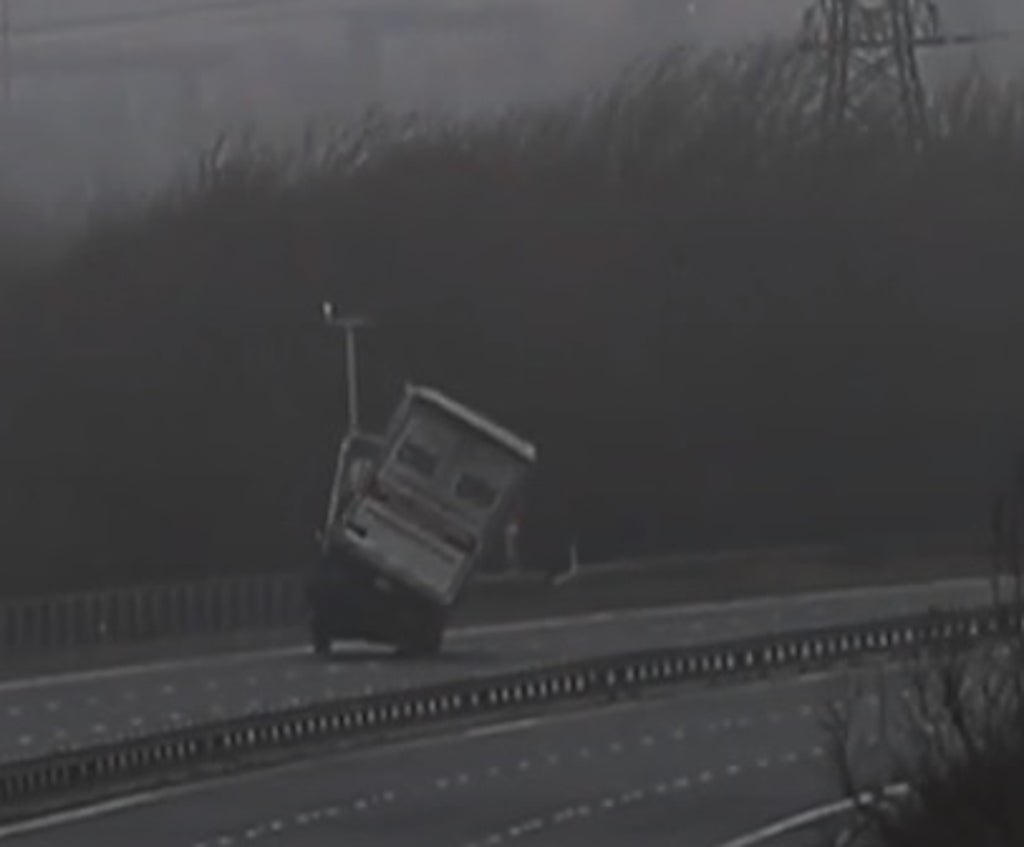 Dramatic footage shows the moment a large lorry is toppled by gale force winds as Storm Eunice battered the UK.

Video captured on the M4 in southern Wales shows the heavy goods vehicle wobble as it travels on the road between Pyle and Margam.

A huge taste of wind then sends the vehicle racing from side to side before it turns over onto its side and slides long the tarmac.

Others motorists can be seen slowing down as an “abnormal loads” vehicle tails slightly behind.

South Wales Police’s Control Room yesterday warned drivers to expect delays between junctions 37 and 38 of the motorway following the incident.

A series of weather warnings were issued for south Wales as Storm Eunice battered the country with gale force winds of up to 122mph.

Three days of weather warnings for northern parts of the UK remain in place until the beginning of next week, for ice followed by strong winds and heavy rain.

Storm Eunice caused chaos across much of the country on Friday, with flights, trains and ferries cancelled.

Travel disruption has continued into Saturday and hundreds of thousands of homes are still without power.

Four people were killed in the storm, with a number of incidents of people being struck by falling trees.

And in one incident Thames Valley Police said a member of the public sustained serious injuries when they were struck by “falling debris” in Henley-on-Thames.

Several bridges were closed, including both Severn Bridges on the M4 and M48, the Humber Bridge between North Lincolnshire and East Yorkshire, and the Britannia Bridge connecting Anglesey with mainland Wales.

Major roads including the A66 cross-Pennine route and the M8 between Edinburgh and Glasgow were partially closed before reopening later.

Train operators across Britain urged passengers to avoid traveling on Friday as emergency 50mph speed limits were put in place in many areas, with no trains operating in Wales for the entire day, and severe disruption out of London.

On the water, P&O Ferries suspended all sailings between Dover and Calais, while the Sandbanks ferry connecting Poole in Dorset and Studland was also halted.

And in the skies, passengers on a flight from Bordeaux to London Gatwick endured two aborted landings before their plane was put in a holding pattern over the south coast and then forced to return to the French city.

Dozens of flights were cancelled, with hundreds of delays across UK airports.

Across the UK, but particularly in the worst-affected areas, people have been asked to stay at home.

Emergency services and the Met Office warned people to stay at home.

Prime Minister Boris Johnson said: “We should all follow the advice and take precautions to keep safe.”