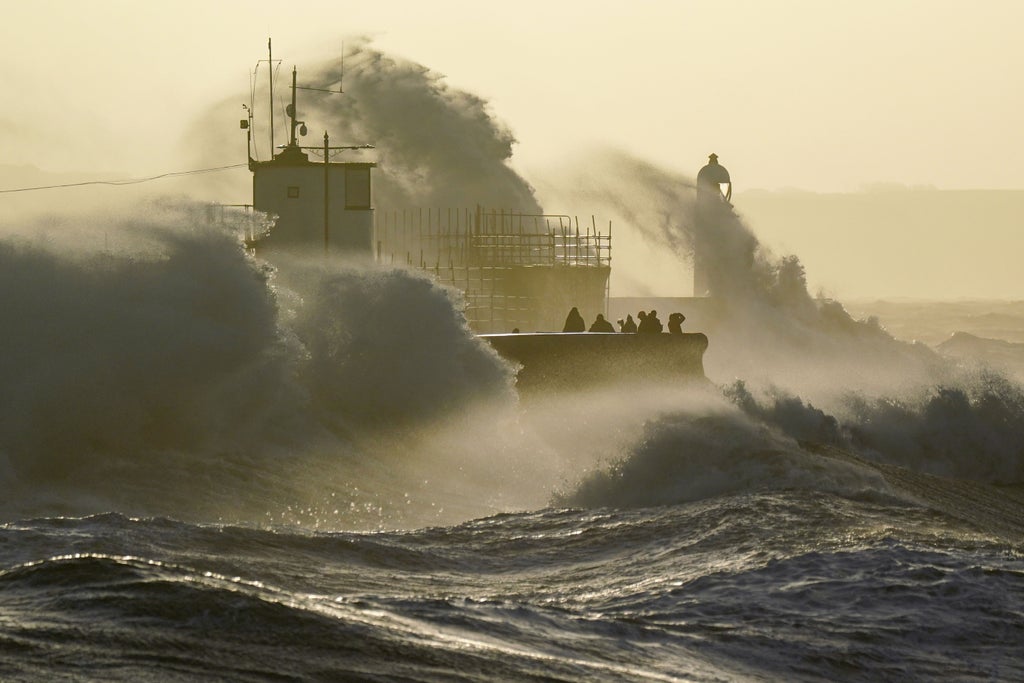 Millions of people have been urged to stay at home for the day due to safety fears over the impact of Eunice, one of the worst storms to hit the UK in a generation.

Tens of thousands of homes have been left without power, while flights, trains and ferry services have been suspended, and roads, schools and businesses have shut down as potentially record-breaking gusts of more than 120mph have been recorded in the most exposed areas.

Even though the first of the Met Office’s two ultra rare “red” weather warnings expired at midday affecting the south west of England and south Wales, a second remains in place until 3pm across the East of England and London due to the combination of high tides , strong winds and storm surge.

But attention is already turning to the impact beyond Friday afternoon, with further disruption to travel and more weather warnings issued for Saturday.

Prime Minister Boris Johnson wrote on Twitter: “We should all follow the advice and take precautions to keep safe.”

Amid the chaos – with swirling gusts falling trees, tossing debris in the air, and damaging homes – emergency services were forced to issue warnings for people to stay away from the worst affected areas.

Roy Stokes of the Environment Agency said it was “probably the most stupid thing you can do” to travel to the most exposed places, amid reports of people climbing on to seawalls and swimming in the sea.

Winds of 122mph have been provisionally recorded at the Needles on the Isle of Wight, which, if verified, would be the highest ever recorded in England.

Across the UK, but particularly in the worst-affected areas, people were asked to stay at home.

Western Power Distribution said that, as of midday, more than 110,000 homes were without power, the vast majority of which were in the south west of England.

On the transport network, several routes were closed.

Wind speeds forced both the M4 Prince of Wales Bridge and M48 Severn Bridge into Wales to close to traffic for what it believed to be the first time in history.

Train operators across Britain urged passengers to avoid traveling on Friday as emergency 50mph speed limits are in place in many areas, with no trains operating in Wales for the entire day.

P&O Ferries suspended all sailings between Dover and Calais, while dozens of flights were canceled and hundreds delayed across UK airports.

The Environment Agency has issued 10 severe flood warnings – eight along the Severn and two along the Wye – meaning there is a danger to life, as well as dozens of flood warnings and more than 100 flood alerts.

A separate amber weather warning is also in place for gusts across England until 9pm, as well as yellow warnings for snow in Scotland and Northern Ireland.

The Met Office has issued a less-severe yellow wind warning for much of the south coast of England and south Wales on Saturday, which it said “could hamper recovery efforts from storm Eunice”.

Several red warnings were issued in late February and early March 2018 during the so-called “Beast from the East”, the storm that brought widespread heavy snow and freezing temperatures to many parts of the UK.