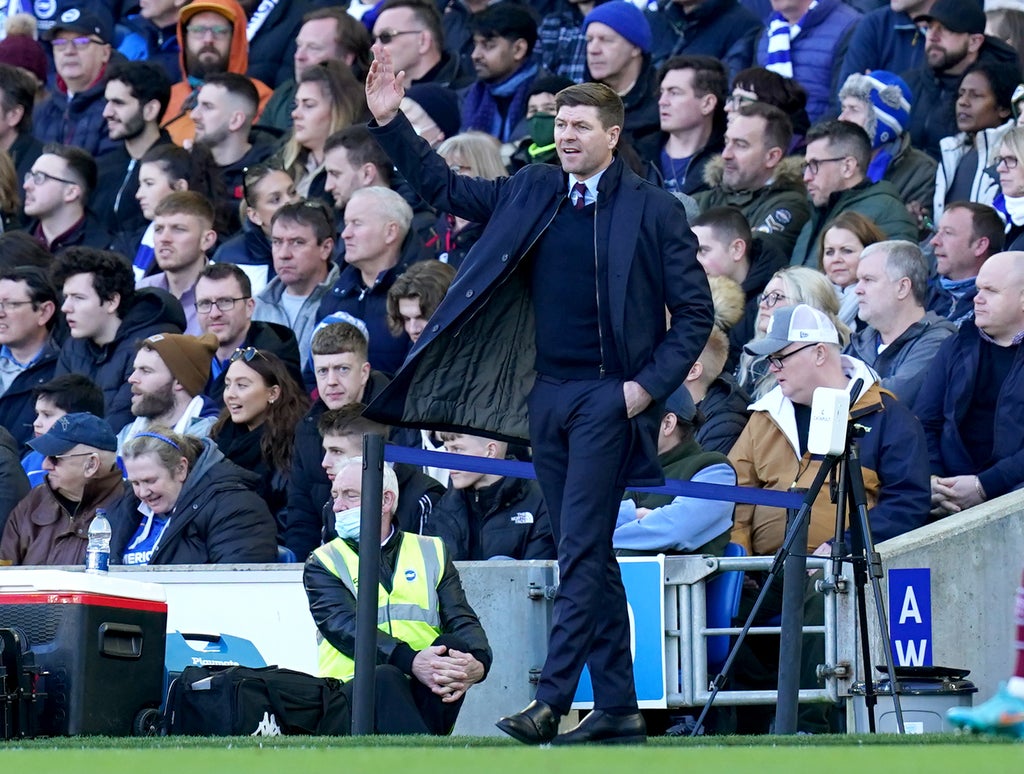 Aston Villa boss Steven Gerrard has taken responsibility for Matty Cash’s yellow card after the defender revealed a message of support to a Poland team-mate in Ukraine after opening the scoring in the win at Brighton.

Cash broke the deadlock in a game delayed by half an hour as the Villa coach was struck in traffic.

He then took off his shirt to reveal a “stay strong” message to Dynamo Kiev defender Tomasz Kedziora, receiving a caution in the process.

Ollie Watkins then scored his first goal since December to wrap up a 2-0 victory for Villa as Brighton once again failed to win at home.

After a lengthy social media post earlier in the day defending Poland’s decision not to play against Russia following the invasion of Ukraine, Cash arrowed a fine, low finish in off the post from 20 yards.

He then displayed a message to Poland team-mate Kedziora and his family, who are stranded in the Ukrainian capital, picking up a booking for the gesture – something his manager is taking the blame for.

“I should have spoken to the players before the game and said to them, ‘If you score any goals, remain calm’.

“We’ve all got to respect the situation and I think that’s what Matty tried to do.

“But I’ll certainly take responsibility for that. There’s no blame towards Matty. Everyone has different feelings. That’s on me that one.”

The PA news agency understands the booking from referee John Brooks came because Cash had fully removed his shirt and not for showing a message written underneath but Gerrard refused to criticize the decision taken by the official.

“This yellow card is on us,” he added.

“There’s certainly no finger-pointing. There’s no blame on Cashie at all. I should have mentioned it before the game to all the players and I didn’t, so I’m responsible for that yellow card.

“There’s certainly no blame towards the player or the Premier League. That’s on me.”

Gerrard had guided Villa to a 2-0 victory over Brighton in his first game in charge on December 20 but had seen his side win just one of the previous seven league games heading to the south coast.

The former England skipper wanted a victory here to be a “medicine” for his team – and their league position certainly looks healthier following these three points.

“The important thing is to take the confidence and belief from today’s performance and build on it next week against Southampton,” he added.

“The preparations were challenging today with the crash on the motorway but the players remained focused and calm. We can only control being patient and staying focused. The players produced a top performance.”

Cash was not the only Poland international on the pitch, with Brighton head coach Graham Potter revealing Jakub Moder had also backed his national team’s decision taken earlier in the day.

Asked if he had spoken to the forward, Potter said: “Not to me specifically, but he mentioned to our staff and is happy with the decision that has been made. Obviously, he shares the same concern that we all have.”

Cash’s caution was one of nine bookings dished out by Brooks – but Potter had no issues with the officiating after watching Brighton slip to a third straight league defeat without scoring.

See also  Netflix's Bad Vegan: Who is Sarma Melngailis and what happened to her?

“Both teams were competitive, both teams wanted to win and lost the previous matches,” he added.

“There was a desire there to compete and to win, it was there from our guys and those from Aston Villa, so no problems (with the referee).”