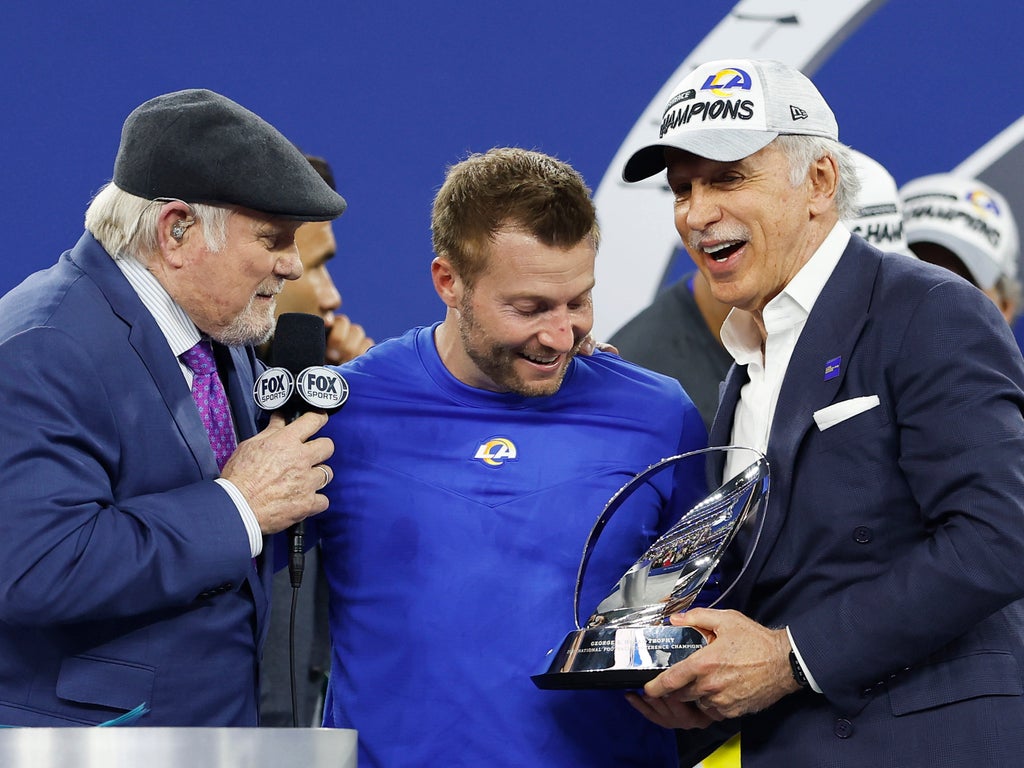 Stan Kroenke does not need the Los Angeles Rams to beat the Cincinnati Bengals and win the Super Bowl on Sunday. Everything the 74-year-old dreamt about has already come true.

The Rams, the team Kroenke bought 12 years ago, are widely expected to triumph in the NFL’s biggest game. Part of the reason for their favoritism is because the showpiece event will take place in SoFi Stadium, their home ground. They also have a superb team. Arsenal fans should look away now.

Kroenke, who also owns the London club, has bet the farm on winning this year. The Rams emptied their store of draft picks for the next two years to bring in Matthew Stafford, the quarterback, from the Detroit Lions and Von Miller, the outside linebacker, from the Denver Broncos. The Stafford deal also sent Jared Goff, who was selected first in the 2016 draft and who took the Rams to the Super Bowl two years later, to Detroit. LA does not have another first-round pick until 2024.

They also snapped up Odell Beckham Jr, the talented but unpredictable wide receiver. Although Beckham came cheap – he had been released by the Cleveland Browns – his acquisition of him was another gamble that paid off.

The Vince Lombardi Trophy would be the perfect end to the story for Kroenke but the biggest gains have already happened for the man who owns a portfolio of teams including the Denver Nuggets in the National Basketball Association, the Colorado Avalanche of the National Hockey League and the Colorado Rapids in Major League Soccer. When he bought the Rams in 2010, the franchise was based in St Louis. Right from the start, Kroenke had his eye on the City of Angels.

Los Angeles is the second-largest television market in the United States but it has never been a professional American football town. The Chargers – who share SoFi Stadium – tried it but relocated to San Diego for 45 years before bouncing back to LA five years ago. The itinerant Raiders had a 12-year spell in southern California in the 1980s and 90s before returning to their spiritual home in Oakland (they are now based in Las Vegas). The Rams had the longest tenure in LA, spending 48 years in the region before deciding life in St Louis was a better option in 1994.

Other sports ruled Los Angeles. Baseball’s Dodgers are the area’s signature team. Basketball’s Lakers have similar status. Even ice hockey’s Kings were a hotter ticket than the Rams during the NFL team’s waning years in LA.

Those who craved American football action were largely satisfied by the college game, where UCLA and USC frequently attracted bigger crowds than the professional game.

In that sense, Kroenke took a risk. Viewing it from another angle, it was a safe bet. The land in Inglewood where SoFi Stadium would be built was owned by Walmart, the huge discount supermarket chain. The company could not get permission to build a superstore so sold the land to the Rams owner. The transaction went smoothly: Kroenke, after all, is married to the heiress to the Walmart fortune and has been on the firm’s board. The billionaire then went into partnership with the company that owned the adjacent Hollywood Park racetrack. Even before the NFL had given permission for the Rams to move west, building began on the new stadium.

That is just the start. Inglewood is one of the collection of cities that comprise the notorious South Central area. Low property costs made it ripe for gentrification. Kroenke and his partners are redeveloping the district and have embarked on the biggest real estate project west of the Rockies. Work continues on building programs that will create housing, offices and shopping centers on a 298-acre site. The centerpiece is SoFi.

After the NFC Championship-game victory over the San Francisco 49ers, “Silent Stan” accepted the George Halas Trophy and addressed the crowd. “Whose house?” I have shouted. “Rams’ house,” came the reply. Hosting the Super Bowl in what some consider the best stadium in the world adds to the prestige of the team. More importantly, it brings extra value to Kroenke’s Inglewood empire.

Winning the Super Bowl is estimated to add about five per cent to an NFL team’s annual income. The real profit lies elsewhere. House prices in Inglewood have risen by 148 per cent since Kroenke announced his intention to build the stadium. The lack of public transport and Covid have put a brake on the spiraling profits but the city council is already exploring plans to build an elevated train system connecting the ground with the local Metro network.

Cashing in draft picks to win now is mortgaging the team’s future. The plethora of stars on the Rams’ payroll could make things difficult next season. The club was the second-worst of the 32 NFL franchises when it came to unused salary cap rollover this year. The figures will be adjusted but the team may have to cut some highly-paid players or renegotiate contracts to conform with the financial rules. The wage structure is complicated but the players are very aware that the future is now for this group. They have all the weapons to overcome the Bengals but Cincinnati have shown remarkable strength to reach the Super Bowl. Nothing can be taken for granted.

Nothing, except that Kroenke cashes in, win or lose. This could be the second successive year that a hated owner of a Premier League club collects the Lombardi. Last year the Tampa Bay Buccaneers took the big prize and the sight of Joel Glazer accepting the trophy enraged Manchester United fans.

Arsenal fans watching on Sunday night could experience that same sinking feeling. Watching Kroenke get his hands on silverware in LA will only deepen the gloom in north London, especially as the owner is filling his pockets with money that is unlikely to get spent at the Emirates.